This is a 1 Million Women guest blog written by Eve White.

In the last six months the Carter family, from Tasmania, have barely produced enough rubbish to fill a biscuit tin.

Oberon and Lauren Carter and their three children have been aiming to live as close to 'zero waste' as they can since October 2015, when they participated in (and won) Sustainable Living Tasmania's 'Sustainability Challenge'.

The challenge encouraged participants to see how low they could go with energy consumption, water use and waste production for a fortnight. The family lived a fairly low-waste lifestyle to begin with as they produced no food waste, but even so, an audit of their waste prior to the challenge revealed that they produced more than 100 pieces of non-recyclable rubbish and 100 recyclable items in a week.

During the challenge the Carters managed to send zero items to the rubbish bin or to the recycling bin and reduced their water and electricity consumption considerably. After completing the challenge, they felt inspired to keep going.

“Once the fortnight was up we realised we had an obligation to keep doing this; there was no good reason to go back to the way we were – and we haven’t. The surprising thing is that we don’t find this new way of low-waste living that difficult – this is our new normal”

Since November 2015, Oberon and Lauren have been running an enormously successful Facebook group Zero Waste Tasmania, which has over 1900 members from all over Australia and is growing all the time. They have also created the Zero Waste Families e-course to help others move towards waste-free living. During the month of June, sixty-five families completed the first round of the course, ranging from people who started close to zero waste through to others who are completely new to the concept. .

Oberon believes the recent surge in public interest in reducing waste is attributable to a combination of factors: "People started becoming aware of the problem of waste in the '80s, which is when wide-scale recycling was introduced. But since then there's been a bit of complacency, probably because of the perception that recycling is the solution. Unfortunately recycling is not usually the best solution. Recycling processes consume energy, water and power, and quite often items that you put in the recycling bin will not be recycled but will end up in landfill. Recently there have been a few zero waste advocates getting the message out there, as well as media coverage of the problem of plastic pollution. These factors, together with public concern about climate change and our sense of responsibility to change our behaviour, have contributed to the popularity of the zero waste movement."

For Oberon, one of the most rewarding aspects of this lifestyle has been having the kids involved, "We don't really know what the world will be like for our children as they grow up. Our kids are aware of waste issues and impacts to the environment and we're doing our best to provide them with the tools to respond to challenges that they might face", he explains. "Our 12 year old daughter recently wrote to a local grocer asking that they use paper instead of plastic bags for loaves of bread and to use tongs instead of disposable gloves when handling loaves for customers' reusable bags – after some discussion, the business was happy to make these changes. Being engaged in this process was very empowering for our daughter."

The process of engaging with small local businesses in this way is important, and is something that is often missing in society today with many people reliant on enormous supermarket chains full of packaged food.

Oberon emphasises the importance of supporting your local small businesses and local growers, asking questions about where things come from, and making suggestions to businesses on how they can reduce waste:

"Leaving a message on a business's Facebook page can be a good way to do this, and businesses will often respond - especially small businesses, which are usually more willing than big companies to change." 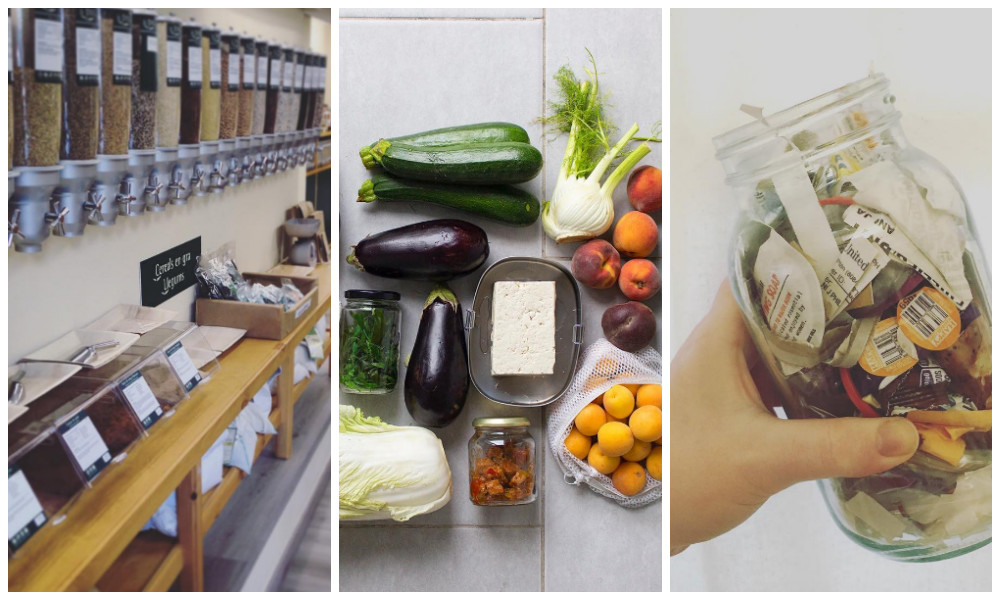 The Carters find that some of the most difficult waste to avoid is packaging associated with some essential first aid and medical items. Oberon suggests buying Panadol and Nurofen in large plastic bulk containers, which can be reused, instead of blister packs, and replacing plastic bandaids with compostable fabric ones. Dental floss is problematic: whilst compostable options exist, they tend to be packaged in plastic!

Dairy products can also be difficult. Oberon and his family have reduced milk consumption and purchase cartons in paperboard cartons rather than plastic bottles, reusing the cartons to raise plant seedlings. Paperboard is also more easily recycled (into paper) than plastic bottles. And if you eat yoghurt, it is quite easy to make your own and avoid single-use containers.

If you want to reduce your waste, Oberon suggests that a good starting point is to audit your waste for one week. Count how many items of recyclable and non-recyclable rubbish you produce, then multiply that out over one year or ten years. This will probably be an eye-opener and will hopefully motivate you to start making changes. Fortunately, even small changes can result in big reductions in waste. The main thing to focus on is avoiding single use plastics. To start, Oberon suggests:

"Most importantly", Oberon says, "Educate yourself about the things you buy and consume - where they were made, how they were produced, what environmental or social harm they may cause and where they are likely to end up. Become informed and empower yourself to create positive change! Even if you already live a low waste lifestyle, there are bound to be positive actions you can take to produce even less."

Eve White is full time mum and part time freelance editor with a PhD in ecology. She lives in southern Tasmania with her husband and two young kids and is trying to help more parents get involved with campaigning for climate action with her Facebook group, Australian Parents for Climate Action.

Read this next: How To Make All Your Own Toiletries