Why We Need To Stop Plastic Pollution Right Now

I ask myself, what makes me care?

The animals, the natural beauty of the environment, the future of humanity, my future? In sheer honesty, it all makes me feel empathy for the world we create with every decision we make and every action we take. Indeed, it may be as simple as that - attempting to find an emotional connection to the issues in life we deeply care for. I have always wanted to make a positive change and I know many of you reading this intrinsically feel that drive to change the world too. So, the remaining question is, where do we start?

There is a cycle which begins with our first action and ends with a positive outcome or alternatively a clear ramification. Yet, many of us forget about this cycle - as we use over 1 million plastic bags per minute, and in turn, harm thousands of aquatic species that are imperative in the functioning of the planet. It's a material that we could perhaps coin as having an inexorably greater lifespan compared to any other substance created by man. However, we merely use plastic as a disposable material in nearly every product we purchase or technology we design. We make it to last forever, yet, we will use a plastic bag for only around 12 minutes before "disposing" of it.

However, a range of initiatives are taking place all around the globe that have designed environmentally friendly plastic alternatives. The Seabin is a model of such innovation. The CEO and Co founder, Pete Ceglinski has worked in a team to develop a product that can float in key marinas and ports around the world. These seabins are made from recycled plastic and can collect up to 20kg of debris in one day. It sucks in waste, oil and other rubbish into a recyclable bag, which then can be pulled out of the ocean once it has reached full capacity. 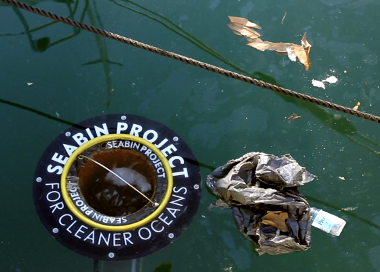 In addition, we are seeing more innovative land regeneration projects being proposed in the Pacific Islands in order to replenish masses of land following years of soil contamination caused by plastic pollution. Bioremediation and phytoremediation have become essential methods in regenerating degraded areas of the land, as they introduce microorganisms and living green plants, respectively to break down any environmental pollutants that exist in the contaminated area. If these areas are left untreated, toxic chemicals including bisphenol A (BPA) leach into underground waterways and local agricultural fields, exposing families living on these islands to adverse health effects such as reproductive and hormonal imbalances in the body.

Many National Parks and islands are faced with a worrying predicament - how to manage these built up plastic waste dumps engulfing their pristine aquatic and terrestrial ecosystems. It has been found that there were "only 50 cases between 1991 and 2010 in which phytoremediation was considered for treating the 1,620 highly contaminated sites on the National Priorities List (under the US Environmental Protection Agency), suggesting that the potential for bacteria and plants to remove toxins from soil may be substantially overlooked." However, by utilising the relatively inexpensive technique of phytoremediation, remediation experts are saving significant expenses that would otherwise be sourced from manually excavating plastic pollution that has built up overtime in these ecosystems.

We are drawn back to this cyclical notion that displays our actions are inextricably linked to a direct consequence or a wave of positive change. So which one will it be? It's not about being overwhelmed by the sheer scale of this issue. Rather it's about tackling it one step at a time, sourcing sustainable alternatives and encouraging others to do the same.

Karen Davids enjoys going for long walks in nature and swimming at her local beach. She's a huge fan of vegan cooking, and loves to share her experiences through any form of writing, especially poetry.

Read Next: How to Break Up With Plastic