Taking Inspiration From Biophilic Design: How You Can Bring Nature Into Your Home

Many of us have heard of sustainable design as a way to make homes planet-friendly, but have you heard of biophilic design? It is a concept where buildings incorporate and mimic natural shapes, patterns and material designs in order to bring nature into the built environment and, most importantly, make people feel a strong sense of connection to place. The concept is deeply rooted in history; from Indigenous communities to medieval Islam, the practice of building in response to the natural world has existed for thousands of years. With a rise in urbanity in the modern era, many people are feeling the need to reconnect with nature, and biophilic design is an answer to that problem. Research proves there are so many benefits to the practice as well; not only is it beautiful, but incorporating nature into hospitals can heal patients faster, make people more productive in offices, and help with a variety of mental health problems facing our society.

The principles are all based in having a sensory connection to nature so that it mimics a natural environment, such as having a visual view of nature, which can be either simulated through art, video or a naturally occurring view. It can also be a "non-visual connection to nature" through sound, smell and textures. Other principles include stimuli that do not follow a rhythm such as birds chirping and leaves rustling, good airflow that changes slightly to harken to weather patterns, water features like a view of a stream or a fountain nearby. Stimuli can also include changing light that mimics natural light patterns such as having access to direct sunlight, "biomorphic forms and patterns" in things such as sculptures and wallpaper, material connection to nature by using natural materials from the surrounding area, and complexity and order in patterns such as tiles. Biophilic design should invoke certain feelings, like a sense of "prospect," where the space feels open yet safe, "refuge" where a person can withdraw for a moment to feel safe such as a meditation room or a covered walkway, a sense of "mystery" where some objects are partially obscured from view and entice someone to look further, such as a vine-covered trellis. And finally "risk/peril" where a person feels some loss of control, such as standing at a height, but is not in risk of actual danger. Some or all of these principles can be used in combination with the ultimate goal of reimagining people as part of nature, not removed from it.

Here are some examples of biophilic buildings from around the world that are using biophilic design principles creatively, as well as ideas for how you can incorporate these principles into your own home:

1. Australia: There are five new metro stations currently being constructed in Melbourne that are incorporating biophilic design principles. The stations will be Arden, Parkville, State Library, Town Hall and Anzac. They are set to transform the traditional way of creating metro stations and reconnect people to nature, all while having health benefits; as Dr. Phillip Roös, who was a sustainability consultant for the project, noted, "A recent study found that perceived waiting times at bus stations were lower when there were trees and greenery around them. Nature has the power to ease city stresses." 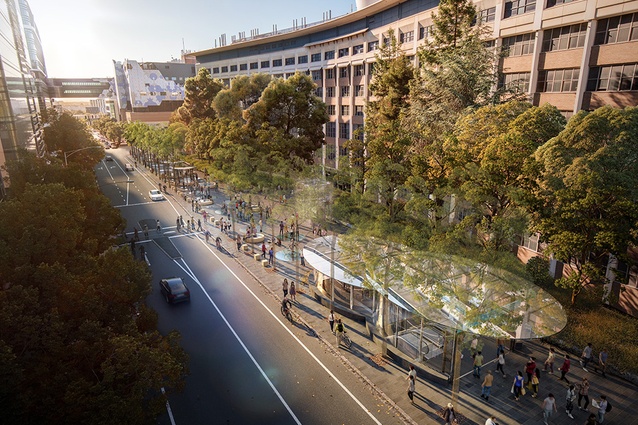 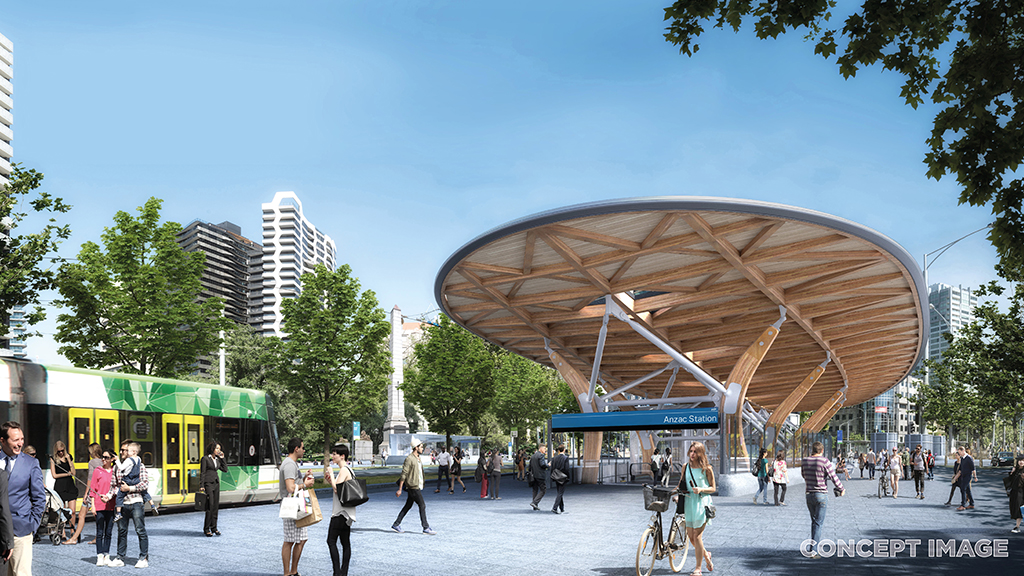 These buildings are set to incorporate natural forms well, as many have curved patterns instead of straight lines which mimic leaves, bulbs, and tree stumps. The Anzac station's curved cover gives a sense of refuge from the elements and also uses patterns that can be found in nature, while the clear Parkville station cover allows you to connect to the natural light and admire the surrounding environment. A person can gain a sense of refuge standing under a cover while gazing at the surrounding trees. One easy way to integrate with plant life in your home environment is by buying a few native plants to add to your home. We also love the idea of collecting fallen branches to display as decorations on a mantel or propped against a wall, where you can display other items or leave as is!

2. Singapore: The Khoo Teck Puat Hospital in Singapore is so green that, "the total surface area dedicated to greenery is four times the actual land the hospital building sits on." The park area allows patients to recover, and can also be enjoyed by the public while they admire the native plants, nearby pond and pollinators that abound. They have also included wind walls that can increase air flow by 20 to 30 percent. Using the food from the roof in the kitchens, this property is self-sustaining in many ways.

Many of these practices can be imitated in our homes, including increasing airflow and interconnection to the elements by opening the windows of your apartment or office. Also, planting a garden with fruits and veggies, or designating a small area of the kitchen for some plants. This allows us to work towards being self-sustaining and have fresh food easily available. If you don't have a view of a garden or trees outside, hanging a planter basket near your window can provide plant vistas and brighten your mood.

4. Scotland: Ruins Studio in Scotland creatively uses the surrounding environment's history by building a private home within the stone ruins of an old farmhouse. The inside looks as if you are in a cave, offering peepholes with natural light and stone features that blend with modern wood details. It gives the viewer a sense of wonder, while incorporating natural light and materials as well as scenic views of the countryside. 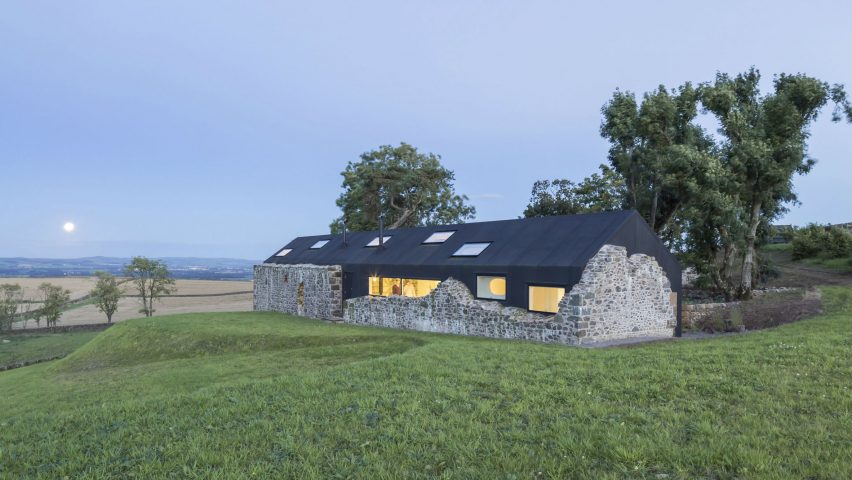 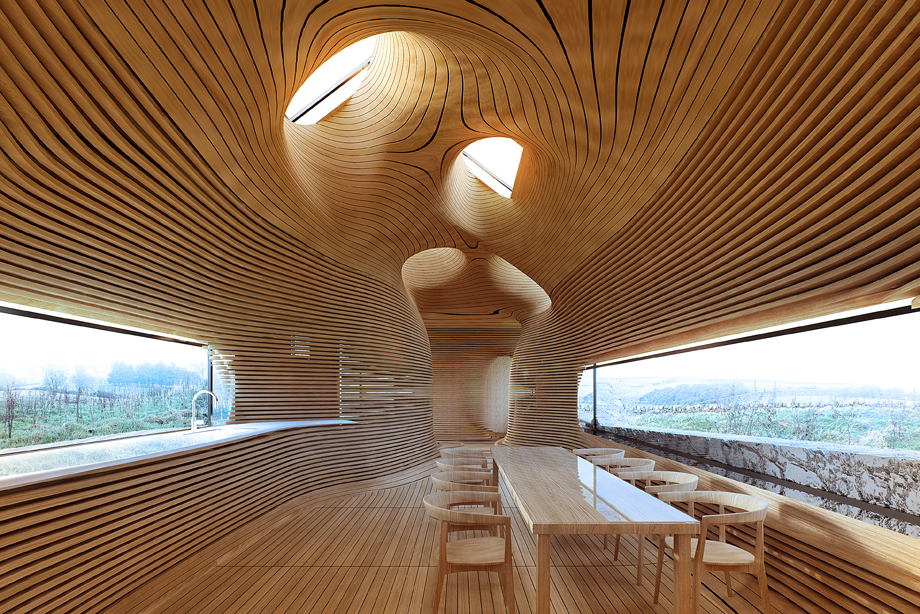 A great way to play around with natural light in your home is by creating sheer curtains out of fabric you already have that will flow with the breeze and filter in different amounts of light at different stages of the day. A small fountain that recycles water can also reflect interesting light patterns on your walls, as well as a hanging sculpture made out of found beach glass and shells placed in a sunny spot.

There are so many ways to embrace biophilic principles, whether large or small, and we hope these ideas and examples can serve as inspiration for creative improvements!

Kaylie is a recent graduate of Occidental College in Los Angeles who is passionate about sustainable architecture, incorporating nature into cities in creative ways, and race and gender justice. In her free time she writes poetry and does watercolors inspired by plants and people, and likes to upcycle clothing. You can follow her on Instagram @kayliecreates_, or connect with her on LinkedIn by looking up Kaylie Treskin.