Concrete jungle? We’ll have to do more than plant trees to bring wildlife back to our cities

Cities are aiming to increase their tree cover. But there will need to be more than trees to encourage wildlife to return.

The federal environment and acting cities minister, Greg Hunt, on Tuesday pledged to increase the number of trees in Australian cities. In a bid to fight higher urban temperatures, the plan will set targets for tree cover.

This is part of a green revolution spreading through the world's cities. From New York to Singapore, urban areas are undertaking bold "greenspace" initiatives – removing concrete and allowing trees and vegetation back in.

Some of the benefits include replacing the ugly infrastructural trappings of vehicles and motorways as well as cooling cities, absorbing air pollution and minimising runoff. These greenings further have mental health benefits, by bringing residents and visitors alike back into contact with the land.

But what about wildlife? Trees alone aren't enough to bring back nature. In the rush to create greenspace, we have to make sure we build it in a way to help wildlife thrive. That will take careful thought and planning.

Many of the world's cities don't have anything special to offer in terms of nature – either because they never had all that much in the first place, or they've long since been lost to urban development.

Melbourne is a case of the latter. James Boyce (in his book 1835) records:

By the time Anthony Trollope visited, then a city of 206,000 “souls” in the early 1870s, the city had already largely turned its back on the Yarra [River], drained the swamps, filled in the lakes and flattened the hills, so that Trollope knew “of no great town in the neighbourhood of which there is less to see in the way of landscape beauty”. 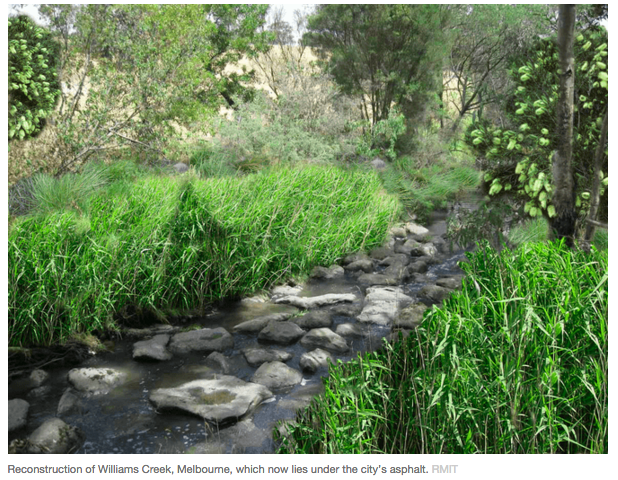 London, New York, Hamburg, Madrid , Detroit, Chicago, Seoul and Singapore are among cities that have undertaken bold greenspace initiatives. These cities have recognised the distinct benefits that flow from connecting people back to the natural world.

Detroit and Singapore have strong biodiversity themes and that's needed too given the global decline in wildlife. Such initiatives help us to view cities from a non-human-centric perspective.

Back in Australia "green infrastructure" has similarly taken hold with councils, property owners and private companies signing up to a national 202020 vision to create 20% more greenspace by 2020. The main underpinning of that "greenspace" is the "urban forest".

While urban forest has a broad definition, cities usually take it to mean tree cover. This has been revolutionised and driven by satellite mapping(known as i-Tree) from the US Department of Agriculture.

This mapping has recently been used to shed light on the performance of Australia's municipalities. Ranking them according to their percentage of tree cover, parts of Melbourne and Sydney scored badly, with many suburbs having less than 20% tree cover overall. Brisbane scored well, with most areas having more than 50% tree cover.

As cities attempt to increase canopies, it's worth noting that these trees will have to deal with increasing extreme weather as the world warms.

However, trees on their own won't bring wildlife back into our cities. In fact, canopies tend to create spaces for dominant native birds such as the Noisy Miner and Red Wattlebird, which by their behaviour exclude smaller birds.

Birdlife Australia suggests that a dense understory of shrubs up to two metres high is required for small ground birds like thornbills, robins, scrubwrens and fairy-wrens to roost in and make brief forays into grassed areas. Thickets also provide protection from eagles and hawks and other predators.

a mixture of fine-leaf and broad-leaf plants with a high percentage of native species, especially at intermediate and ground levels, will provide the greatest opportunities for attracting and holding wildlife.

Private gardens have inadvertently edged towards this prescription, along the way forming "nuclei" for wildlife. To create these on public land, areas will need to be set aside in parklands and other community spaces where small birds and small animals can congregate, breed and flourish.

This may require fencing to counter fox and cat predation, and possibly incorporate bird hides, interpretative apps and surveillance to ensure personal security. We need to give attention to the subtle connections between species.

Wildlife corridors are another construct – in effect they're flyways for larger birds. Some of these already take advantage of the routes provided by revegetated creek and river banks.

Reid suggests that "corridors as narrow as 5 metres will allow passage of lorikeets and wattlebirds even when gaps exceed 30 metres".

But if the gaps in 20-metre-wide corridors grow to more than 30 metres they will block many upper-level feeders including butterflies, pygmy possums and marsupial mice.

As the take-up of greening in places like New York, Hamburg and Seoul shows, it's becoming mainstream in city halls around the world. And we now know that it helps settle the brains of those otherwise enmeshed in asphalt, glass and concrete.

There are some encouraging signs that developers "get it": witness Singapore building an entire forest in a high-rise apartment atrium. A connection-to-nature element also forms part of the revamped Green Building Council of Australia's Innovation Challenge Program. Let's hope it won't be long before that awareness spills over into popular planning thought.

As the world continues to change under human pressure, we need to make sure our cities can be homes for wildlife too.

This article was originally posted on The Conversation.

Read this next: 200,000 plastic bags are dumped in landfill every hour

Read this next: Jane Fonda and Lily Tomlin: "Women will lead the way"