Can Art Put Us In Touch With Our Feelings About Climate Change?

What does climate change look like in Australia? Are we already seeing our landscapes shift before our eyes without even realising it?

Perhaps thought-provoking art can help us come to terms with our changing world, by finding new ways to engage, inform and hopefully inspire action. For hasn't art always been the bridge between the head and the heart?

With that aim, the ART+CLIMATE=CHANGE 2017 festival, organised by CLIMARTE, features 30 specially curated exhibitions running from April 19 to May 14 in galleries across Melbourne and regional Victoria, following on from their previous award-winning festival in 2015.

One of the festival's exhibitions is Land, Rain and Sun, featuring more than 100 landscapes dating from the 19th century to today, curated by gallery owner Charles Nodrum and captioned by us to offer a climate scientist's perspective on the works. We also collaborated with CLIMARTE directors Guy Abrahams and Bronwyn Johnson to bring the idea to life.

Curating an exhibition of artworks as seen through the eyes of a climate scientist poses a challenge: how can we help make the invisible visible, and the unimaginable real?

As we sifted through scores of artistic treasures, there were a few works that confronted us in unexpected ways. The first was Cross Country Skiers, painted in 1939 by renowned South Australian artist John S. Loxton. It depicts the Victorian High Country heavily blanketed in snow, as two skiers make their way through the beautiful wintery landscape. 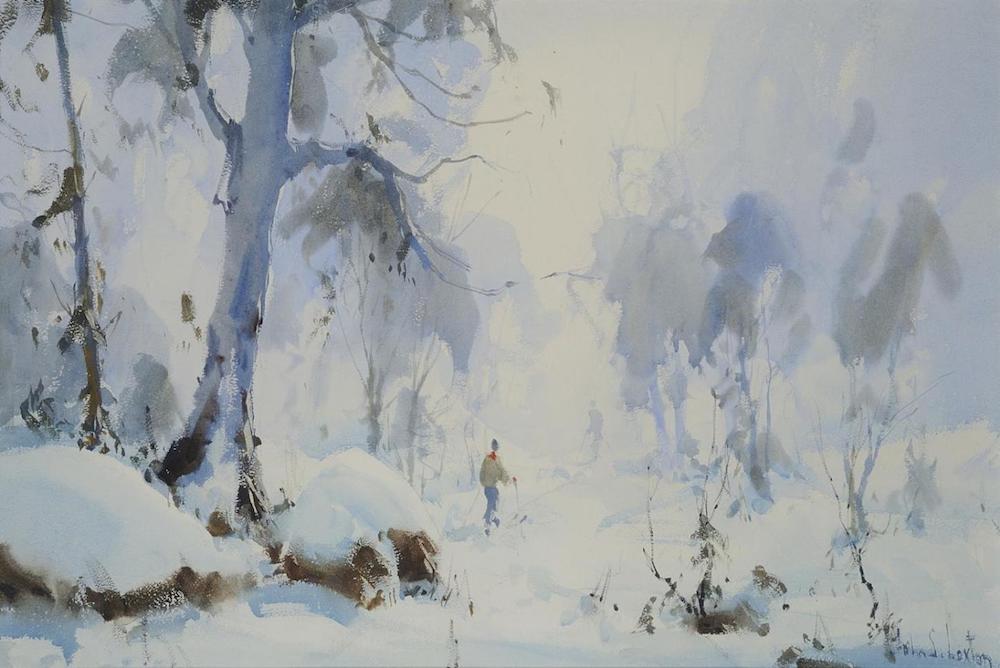 When we saw this image, we realised that in decades to come this work might be considered a historical record, serving as a terrible reminder of a landscape that vanished before our eyes.

Average snow depth and cover in Australia have declined since the 1950s as temperatures have risen rapidly. Under high greenhouse gas emissions scenarios, climate models show severe reductions, with snow becoming rare by late in the century except on the highest peaks.

The Australian ski season could shorten by up to 80 days a year by 2050 under worst-case predictions, with the biggest impacts likely to be felt at lower-elevation sites such as Mt Baw Baw and Lake Mountain in Victoria.

As temperatures continue to rise, our alpine plants and animal communities are in real danger of being pushed off mountain tops, having nowhere to migrate to and no way of moving from or between alpine "islands".

James Gleeson's surreal apocalyptic painting Delenda est Carthago is a provocative work that got us thinking about a future marred by unmitigated climate change. The title refers to Rome's annihilation of Carthage in 149 BC. According to the ancient historian Polybius, the conquering Roman general, Scipio Aemilianus, famously wept as he likened the event to the mythical destruction of Troy and to the eventual end he could foresee for Rome. 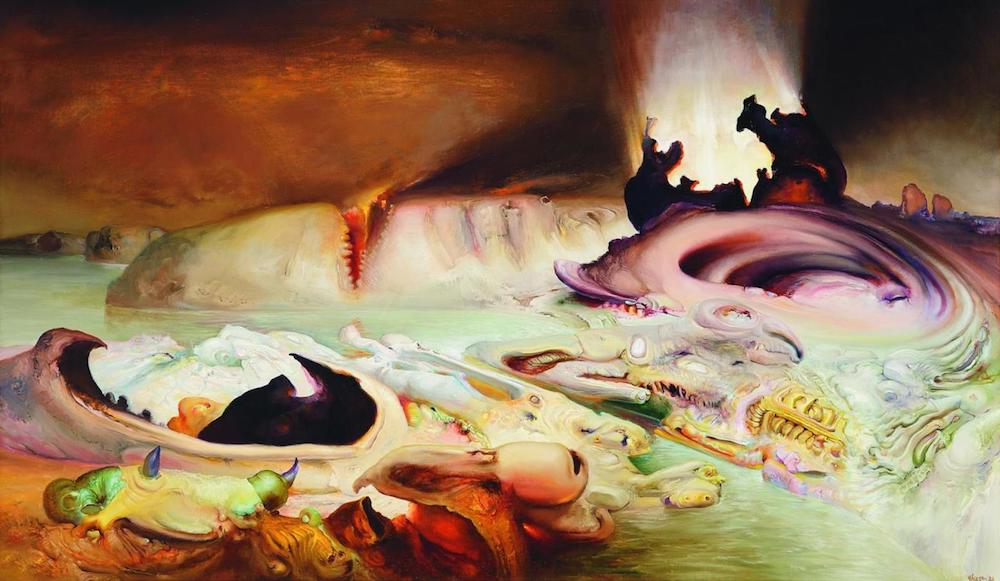 As climate scientists, we are disturbingly aware of the threats to society not only here in Australia, but all over the world. Unmitigated human-induced climate change could potentially see the planet warm by more than 4℃ by the end of the century.

In Australia, inland regions of the country could warm by more than 5℃ on average by 2090. In Melbourne, the number of days over 40℃ could quadruple by the end of the century, causing extreme heat stress to humans, wildlife, plants and infrastructure, especially in urban areas.

Warming of this rate and magnitude is a genuine threat to our civilisation. Gleeson's artwork made us consider that the unimaginable may happen, as it has in the past.

On a more optimistic note, Imants Tillers' work New Litany highlights the importance of communities taking a stand for environmental protection. Over our history Australians have fought against logging of native forests, nuclear power, whaling, and for the restoration of dammed river systems like the Snowy. 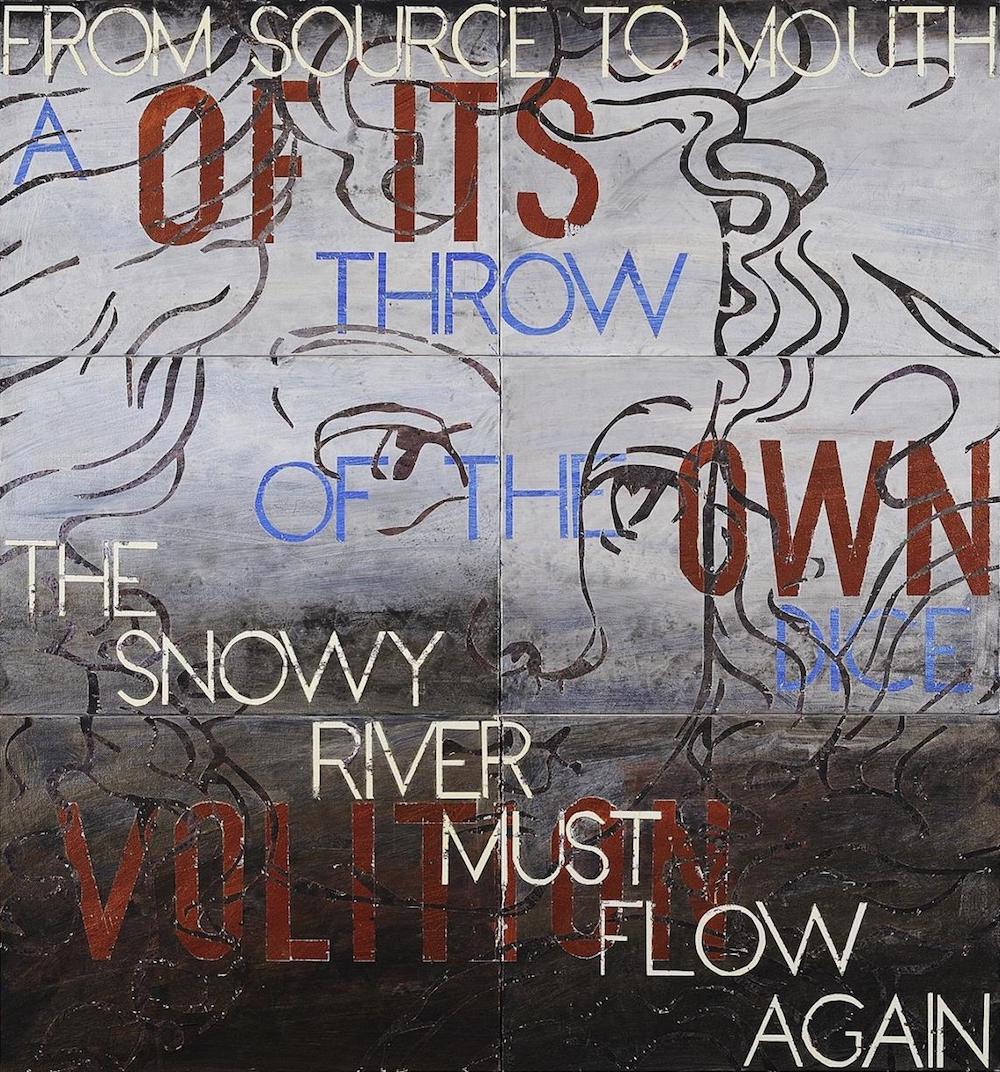 Public concern in Australia about climate change reached a peak in 2006, largely in response to Al Gore's film An Inconvenient Truth and Tim Flannery's book The Weather Makers. Yet the decade since then has brought political turmoil, and national greenhouse emissions continue to rise.

The recent March for Science is a reminder that the stakes are now higher than ever before, and that many people really do care about the future.

The science is telling us that our climate is changing, often faster than we imagined. The range of CSIRO's latest climate change projections reminds us that the future is still in our hands. We can avoid the worst aspects of climate change by reducing our greenhouse gas emissions, but we need to act now.

Art has always been a powerful portal to understanding how we feel about our world. Let's hope it helps safeguard our climatic future.