Is your money supporting the fossil fuel industry?

If we are going to keep the global temperature from rising by two degrees, Australian banks and superannuation funds must be on board.

Fossil fuels are quickly becoming a thing of the past – so naturally, divesting your money from places that support this harmful industry is a great step you can take to ensure you're supporting a greener future!

The small choices we make in our day to day lives can often have a big impact on the environment. Consistent lifestyle adjustments, such as avoiding the use of plastic bags and keeping food waste to a minimum can certainly go a long way, but being aware of where your money is invested and its social consequences aren't usually considered with the environment.

By divesting your money from an unethical bank or superannuation fund, you will be contributing to a larger movement of people around Australia who are making the switch to support ethical investments. We have the power to send these large corporations an important message: stop investing in fossil fuels!

Many banks have taken this on board and have been met with an outpouring of support. This was recognised during the controversy of the expansion of the Abbott Point coal export terminal, when 13 banks withdrew their funding.

Our partner, Australian Ethical Super is one example of a corporation dedicated to making the right choices for our environment, resonating with public interests. They avoid investing in companies that are involved with fossil fuels, logging, exploitation, tobacco, human rights abuses, and weapons and instead contribute to building an ethical, sustainable future by investing in solar, geothermal, hydro, and wind energy companies such as Vestas.

You can read more about their ethics on their website, read a blog post written by Dr. Stuart Palmer – the Head of Ethics at Australian Ethical, or you can check out the following charter: 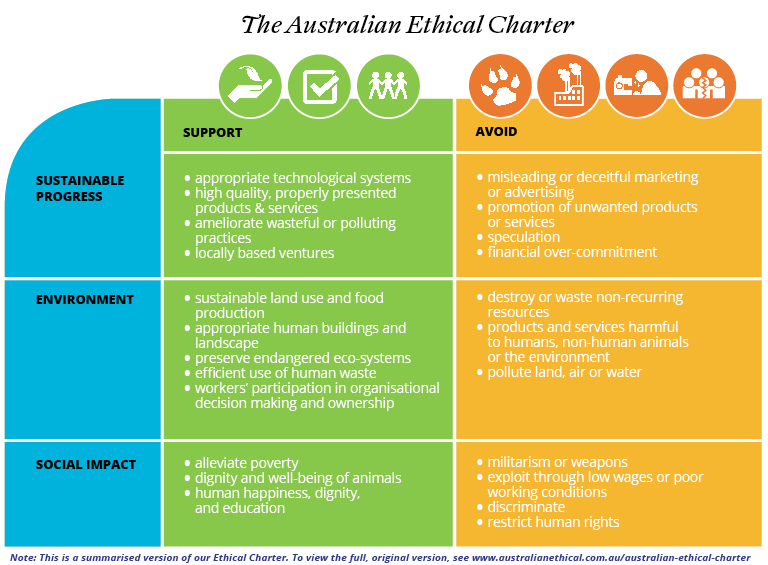 As attention is mounting towards sustainability and human rights abuses around the world, Australian Ethical's investments are in those with a certain future, unlike the uncertainty of the future of coal, oil and gas. And switching to Australian Ethical is easy and will only take about three minutes.

The innovative organisation, Market Forces, campaigns for banks, superannuation funds, and governments to protect rather than damage our environment. They have a comprehesive and readable list comparing 120 Australian banks that outlines which fund fossil fuels and those that don't so you can easily find out where your bank stands on the climate crisis.

Disappointingly, the major four Australian banks – ANZ, NAB, Commonwealth, and Westpac – heavily invest in fossil fuels, as well as HSBC, citi, Maquarie Bank, ING, and AMP. You can check out Market Forces' table to find out how much money these banks are each funding.

The list also shows 50 banks that do not fund fossil fuels and have also provided Market Forces a statement on their position. These include:

Suncorp bank was also included as a bank that used to fund fossil fuels but do not anymore.

With an enormous range of Aussie banks to choose from that refrain from investing in fossil fuels it's easy to make the switch and start supporting a greener future.

Don't know how to change? Check out this guide from Market Forces and make your money count.

Read this next: 7 ways to invest your money in the environment