Since the groundbreaking agreements made last year at the Paris COP21, countries are now joining together and ensuring that the momentum continues.

Paris saw the first real long-term strategies submitted to the United Nations from countries all over the world. Therefore, the main aim of the Morocco Climate Talks was to keep these driving forces from the Paris Agreement in place and continue the progression towards the reduction of greenhouse gas emissions and keeping temperatures well below 2°C. According to the United Nations the overall sentiments at the Marrakech talks were upbeat and satisfactory, and parties were motivated towards furthering the progress.

In the second week all countries agreed to the 'Marrakech Action Proclamation For Our Climate and Sustainable Development' calling to "close the gap between emissions trajectories and the pathway needed to meet long-term temperature goals" and it calls to "eradicate poverty, ensure food security and to take stringent action to deal with climate change challenges in agriculture" along with many other important aims. Overall, the proclamation calls for unanimous support and climate action.

- Limiting the maximum increase in warming well below 1.5 degrees Celsius, with a peaking of global emissions by 2020 at the latest and the achievement of net carbon neutrality by the 2050s.

- A strive to meet 100% domestic renewable energy production as rapidly as possible, whilst at the same time working to end poverty and protect water and food security.

- Recognition for the involvement of women in all levels of the climate change fight.

- The protection for the growing dangers that will disadvantage the most vulnerable and a pursuit of a new era of development and ending poverty. 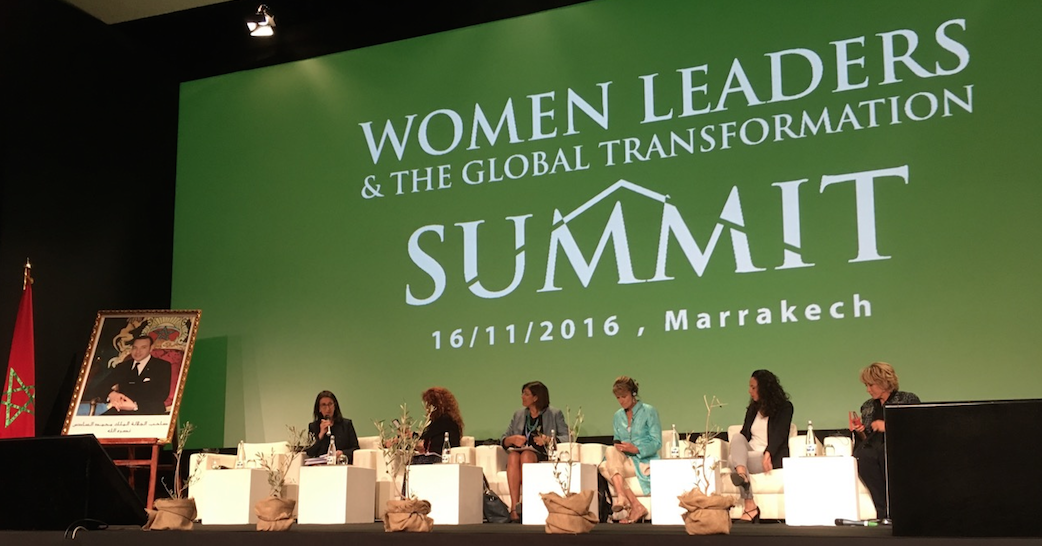 1 Million Women founder and CEO Natalie Isaacs attended the Women Leaders and Global Transformation Summit ran by the Women's Environment & Development Organisation to ensure that gender equality and women's human rights are central to the implementation of the Paris Agreement.

At the summit we heard from influential women drivers of change such as, Mary Robinson, former President of Ireland and the United Nations High Commissioner for Human Rights, who talks about how essential it is to bring gender issues to the forefront of the climate agreement. She says that the agreement in Paris was "gender blind" and this must change. At the COP22, she expresses, we have made the most progress of all on gender issues regarding climate change and the recognition of the important role women have to play. Mary Robinson finishes her speech with profound sentiments about her five grandchildren and her concerns about the world they are inheriting.

We also heard from Helen Clarke, the former Prime Minister of New Zealand, who explains the immense task ahead of us to achieve the Paris ambition and states that we will not reach it's goals if women are not involved at every level. Women and girls are disproportionately exposed to the adverse effects of climate change and that is why it is our right to be involved in the solution.

In an interview with Lorena Aguilar, the Global Senior Gender Adviser at International Union for Conservation of Nature (IUCN) and a climate change negotiator for Costa Rica, she explains,

"Women are incredible agents of change and solution-holders when it comes to combatting climate change. Women are farmers growing our food; they are the seed custodians protecting our planet's biological diversity, they make up to 80 percent of the world's consumption decisions, and -- increasingly -- they are the engineers installing our wind turbines and solar panels. Incorporating women in solving climate challenges is necessary -- we make up half of the population and represent 3.5 billion ways to change the world."

During the negotiations in Marrakech, great strides were made in recognising the need for women to be represented. The conversation about the interrelation between gender and climate change was brought to the forefront of negotiations. Gender-responsive climate policy requires strengthening in activities concerning adaptation, mitigation and means of implementation of climate policies.

For the President of COP22, Salaheddine Mezouar, the most urgent matter is to ensure the voices of the most vulnerable countries are heard, in particular, small island nations and African countries.

As the talks were held in the culture-rich, spice-haven African country of Morocco, it is being called the "African COP" with a focus on how Africa is moving toward the implementation of the Paris Agreement and how it needs international support. In the past year morocco has banned plastic bags, launched a city bicycle hire scheme and launched the "Adaptation of African Agriculture".

Where do we go from here?

The USA has just elected a President who believes climate change is a hoax, Australia was ranked among the worst developed countries for climate change action and 2016 will be the hottest year on record. These are all scary factors and the world still has a long way to go.

However, countries did send powerful political signals about raising ambition and continuing the fight to reduce carbon emissions, there is far greater recognition of the role of women in the climate change fight and coalitions have been made to support vulnerable countries to deliver their climate plans.