The thought of death conjures up fears for many and is often considered a taboo topic of conversation, so much so that the majority of those in relationships don’t know their partner’s end-of-life wishes.

How we choose to leave this Earth however, is more than just a process; it can be a spiritual connection to our loved ones, and for many others, to nature. In fact, it is gradually becoming more popular to practice a 'green burial'.

“And I will show that nothing can happen more beautiful than death.”

But first, the grim facts 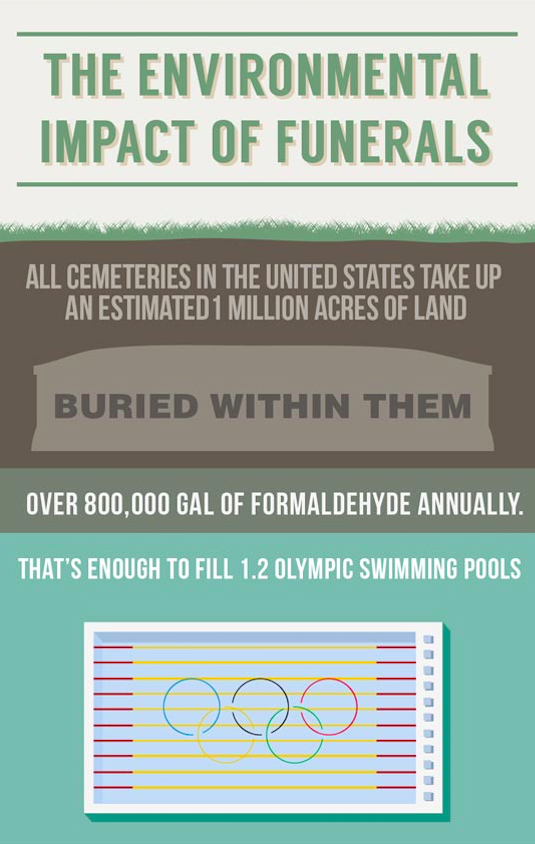 In the West, the two most common rituals are a coffin burial or cremation. But have we really stopped to think about the environmental repercussions these impart?

The Ceremony and Burial

Burials are the most commonly chosen method, and have the greatest negative impact on the environment. The body is drained of blood and organ fluids and injected with formalin – a cocktail of formaldehyde, methanol and other solvents – otherwise known as embalming, to slow down decay and prevent fluid leakage. However, the body will eventually still putrefy, releasing fluids and toxic chemicals alike. These fluids will leach beyond caskets and coffins, and then of course into the earth. 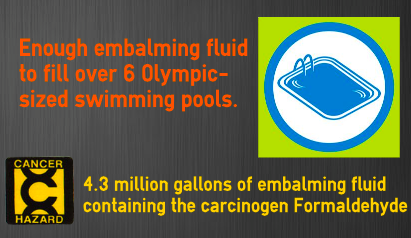 The Process at a Glance

Energy: Firstly, the bodies are contained in a refrigeration holding facility to delay decomposition.

Water: Here in the big fridge, the whole body will be washed from top to toe, including hair.

Toxins & Chemicals: Embalming ensues – the formaldehyde used is recognised as a carcinogen to humans with prolonged, high-level exposure.

Fuel: Burials generally involve mechanically digging and filling a grave. The headstone, which must be treated, is engraved, transported and installed onto a concrete base. Transport fuels for the funeral car and attendees is an additional expense to the environment.

There is also a set duration of each burial, which is determined at the State level. In Victoria, this is currently set at perpetuity, but across the country this varies; 25 – 50 years in some cemeteries, after which the remains are removed and buried in the ground or stored in an ossuary.

And let's not forget about condolence flowers! Many large-scale flower producers employ unsound environmental and social practices. Flowers are often in industrial scale overseas hothouses, and treated with a wide range of chemicals and pesticides.

The primary impact of a burial, however, is the transformation of land, as well as the maintenance. There are close to 155,000 deaths in Australia per year – that's a lot of land. There is then risk of soil and groundwater pollution, made worse if the body has been embalmed.

While the lesser of two evils, cremation bears its own environmental impacts. Bodies are incinerated in a 760 – 1150°C gas-powered oven for a maximum of 3 hours, releasing soot, carbon monoxide and trace metals such as mercury into the atmosphere. The gas and electricity consumed per cremation can roughly provide electricity to a single person for one month.

Once complete, the ashes are cooled in a steel container and transferred to a rotating machine with steel balls to refine the ashes, known as a cremulator. 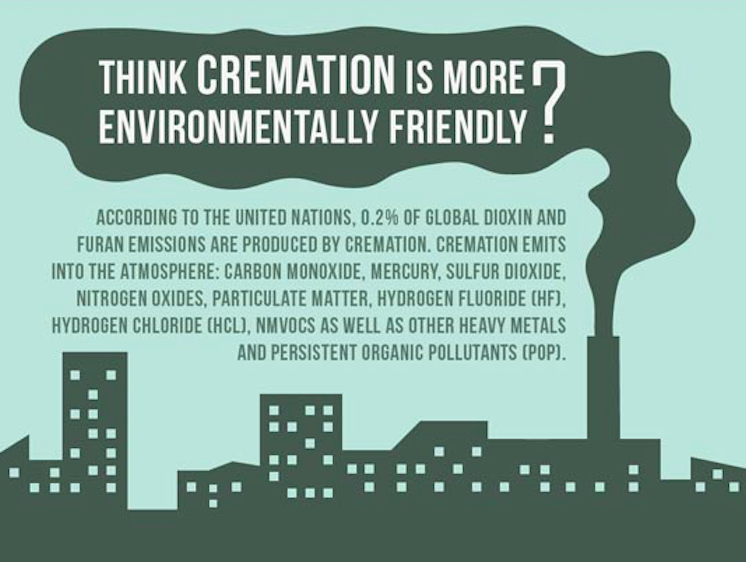 All in all, each cremation requires 28 gallons of fuel, and releases 245kgs of carbon monoxide. But all is not lost! Alkaline Hydrolysis (aka: Green Cremation, Biocremation, Resomation, Aquamation, Liquid or Water Cremation) is a green alternative to the traditional cremation, which produces less carbon dioxide and pollutants using water and lye instead of fire.

Downside? Quite bluntly, a portion of the remains essentially turns to goo, and is flushed down the drain… Having said that, it's not as bad as you think!

A Greener Way To Go

Driving past a cemetery, it is easy to be overwhelmed with a sense of disconnect – spiritually, emotionally, ecologically. But it doesn't have to be that way; we have the ability to make this planet even more beautiful when we pass. Part two of this series will look creative new projects taking on the big sleep.

Read this next: Money can buy you happiness, but not meaning