Climate Change Is Hurting My Home Country Of Bangladesh, And This Is What I’m Doing About It

Born and brought up in Dhaka, the capital of Bangladesh, I remember myself never worrying about shelter.

Despite high death tolls during one of the worst floods in Bangladesh's history in 1988, I remember myself growing up listening to pleasant stories about it. Stories about how Dhaka turned into a flash flood version of Venice. Stories about how people enjoyed fishing in their courtyards and taking boats to work.

The disastrous flood in '98 was about my mum preparing saline and packing reliefs for a charity, which is nice of course. And my parents telling me how my birthday money went into flood relief. I remember myself not being too happy about it. "NO BIRTHDAY CAKE?!" – that's all I could think of.

Well, can't blame a kid for that, can we.

Little did I know, while I was sulking in the comfort of my home, more than 1000 people had lost their lives and approximately 25 million were left homeless.

Growing up in Bangladesh, where the impacts of climate change are obvious and disastrous, I never truly was affected first-hand by the idea of houses and communities ripped apart in a second.

Until 2007, when the deadly cyclone Sidr hit Bangladesh and I learned it the hard way. Well, almost the hard way, having to spend hours without electricity. That was the extent of my first-hand experience.

Little did I know, my no electricity nightmare would end after couple of hours. However, Sidr, like all deadly natural disasters, was yet to reveal its ugly aftermath, involving unprecedented human tragedy.

It was estimated that Sidr took up to 10,000 lives and caused damage costing $1.7 billion USD.

The question remains: Where do the survivors go after their homes, livelihood and dreams have been torn apart in front of their own eyes? 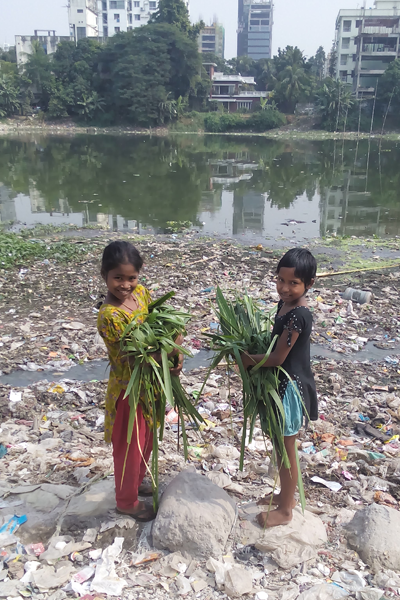 The International Organization for Migration reports near 70 percent of slum dwellers in the slums of already overcrowded Dhaka, have experienced some kind of environmental hardship, often resulting in them becoming climate change refugees (aka climate migrants). In Australia this would be equivalent to all the residents of Brisbane suffering these affects and having nowhere to go.

I don't feel so great when I look back in time and think about my complete incomprehension as a kid and young adult. Even so, I feel immensely hopeful seeing the exceptional strength and resilience people in Bangladesh show every time nature hits hard.

The irony is, these people, being largely blameless for the devastating impacts of climate change, experience the worst consequences of it.

So who is responsible?

It is currently estimated that within the next 40 years, rising sea levels due to climate change is likely to cause forced movement of 18 million Bangladeshi people. 18 million...just imagine three quarters of the Australian population losing their homes and livelihoods to the drastic effects of climate change. Terrifying food for thought, isn't it?

Well, the effects of climate change are that real and will be brutally felt by those who are already disadvantaged, most pertinently the developing nations like Australia's Pacific Island neighbors Fiji and the Marshall Islands, and regional neighbor Bangladesh and its people living on low-lying lands and coastal areas. Climate change is already causing violent cyclones in Fiji, worsening existing vulnerabilities.

Vulnerabilities? Aren't we talking about Fiji, a top rated travel destination for Australians, famous for its vibrant coral reefs, friendly people and beautiful sunset on the sandy beach? Well, it's when the holidays are over, the reality of rising sea level changing temperatures hits hard in Fiji with women and girls being the hardest hit.

After receiving a favor, the norm to say thank you is courteous enough. However, when the destructive cyclone Winston hit Fiji in 2016, apparently saying "thank you" was not enough for many of the Fijian women and girls. In exchange of help with shelter, men demanded sex in return and many women were sexually harassed and raped in overcrowded relief centers.

Reflecting on the gravity of climate change impacts and my failure to comprehend the scope of the situation as a kid have really hit a nerve. Now as I write this piece here in Sydney, thousands of miles away from Bangladesh and Fiji, I take this opportunity to stand in support of reducing climate change impacts for women and girls everywhere.

I find myself failing to comprehend how the controversial Adani-Carmichael mining project, which is set to significantly contribute to climate change, can still be allowed to proceed, and so I'm doing whatever I can to stop it.

Why? The coal mined from Adani's Carmichael mine will be exported to India, where estimated 80,000-115,000 people die annually from coal pollution.

Already condemned in The Lancet as a public health disaster, this mine is going to hurt our climate and each and every one of us. Intensifying the existing gender inequalities and vulnerabilities, women everywhere are going to be more severely affected.

Remember, as women privileged to be in Australia, we have a responsibility to women and girls particularly from developing nations who are often the worst victims of climate change. The stronger our actions are, the harder it will be for the Adani project to go ahead hurting our climate and all of us. Let's build the #StopAdani movement together and stand in support for women everywhere.

If you would like to be involved with the Stop Adani movement, please email enquiries@1millionwomen.com.au