How many more incidents like this will happen if the coal expansion of the Great Barrier Reef goes ahead as planned?...

The ABC reported yesterday that the Australian Federal Police have arrested the captain of a Chinese coal ship for sailing through part of the Great Barrier Reef Marine Park without a pilot.

Sources said that the captain — a Taiwanese national by the name of Lu — will plead guilty to a charge of being the master of a ship without a pilot in the marine park, an offence that carries a maximum fine of $85,000.

Allegedly on New Year's Day, the bulk carrier China Steel Developer captained by Mr. Lu sailed through Hydrographers Passage, a deep water channel near Creal Reef off Mackay, without a pilot as required under law.

As the ABC specified, a "pilot is a maritime official qualified to steer ships through difficult waters and in and out of ports."

Straying from designated shipping lanes in and around the Great Barrier Reef is a huge threat to the reef ecosystem. Although there has not been any major damage to the reef discovered from Mr. Lu's detour, in the past ships veering outside the shipping lane have caused much destruction.

In 2010 a Chinese bulk coal carrier, the Shen Neng 1, ran aground on a reef off central Queensland after straying more than 10 kilometres outside the shipping lane. 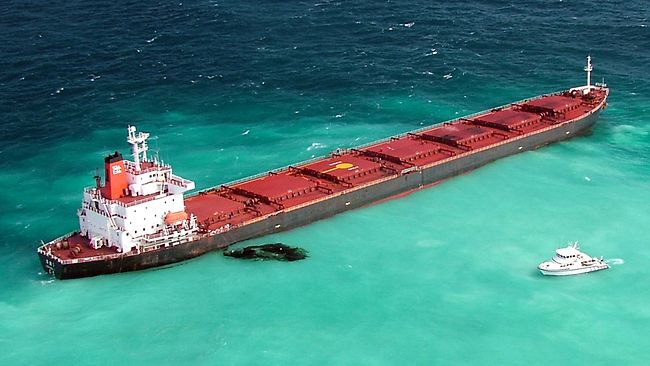 "The grounding [of Shen Neng 1] damaged one of the ship's fuel tanks, resulting in a four-kilometre-long slick of heavy fuel oil. It also carved a three-kilometre-long, 400,000-square-metre scar in and around Douglas Shoal, the largest known damage to the Great Barrier Reef caused by a ship. The Great Barrier Reef Marine Park Authority has said coral regrowth at the site has been hampered by toxic anti-fouling paint used on the hull of the Shen Neng 1."

- From ABC
These kinds of activities are unacceptable, and I fear the amount of such cases would only increase if the proposed coal expansion of the Great Barrier Reef is to go ahead as planned.

Already around 4,500 ships travel through the Great Barrier Reef to Queensland ports every year. Greenpeace believe this number could reach to a capacity of 10,150 by the end of the decade.

Our Great Barrier Reef is in danger and we need your help to save it!

On top of this, the massive industrialization of the Queensland coastline for coal and gas ports is growing.

To save the Great Barrier Reef for future generations we are calling for the UNESCO World Heritage committee to Declare the Reef in danger. We are asking everyone to add his or her name to: reef.1millionwomen.com.au

1 Million women wants you to post a picture of yourself online wearing your goggles to help generate attention to the plight of the Great Barrier Reef.

We are asking you to snap a picture of yourself in your goggles/snorkel and post it on your social media with the tag #gogglesforthereef and ask people to add their name to: reef.1millionwomen.com.au

You don't have to be in the ocean, or even near water to take a picture! The funnier the photo the better! It's all about getting attention to save Great Barrier Reef.

Join us in declaring the Great Barrier Reef in Danger: http://reef.1millionwomen.com.au/

Great Barrier Reef Save the reef