Recycling Your Coffee Pods: Is The Nespresso Recycling Scheme Working?

EVERY DAY, 55 MILLION COFFEE PODS ARE THROWN AWAY. NESPRESSO HAS A RECYCLING SCHEME IN PLACE, BUT HOW MANY PODS ACTUALLY END UP GOING THROUGH THAT SYSTEM?

Since the early 2000's, coffee pods have steadily taken the world by storm. Sales boomed and other companies jumped on the coffee pod goldmine alongside the original Nespresso. And it's not hard to see why. They're quick, easy, delicious and endorsed by George (Swooney) Clooney himself, so what's not to love, right? But the honeymoon phase was short lived. As consumption increased, we began to realise this new addiction was doing more damage than good.

Plastic pods take hundreds of years to break down, clog up landfill and release harmful methane gas along the way. Some pods are made out of aluminium and while this is an abundant resource, the creation of aluminium is energy intensive so should be reused instead of ending up in landfill. By 2012 Nespresso had sold more than 27 billion coffee pods worldwide, enough to encircle the equator 30 times – and that's just one company. It's easy to see why consumers were concerned with this mass production.

Many companies saw this disaster as an opportunity and began developing eco friendly ways to manufacture and dispose of these pods. Nespresso, in particular, introduced a recycling scheme for their aluminium pods. But is it really effective or just a patch solution to a much bigger problem? We've done a bit of research into Nespresso's recycling to see if it's up to scratch or whether you should boycott coffee pods all together.

How Does Pod Recycling Work?

Although Nespresso's coffee pods are made from aluminium, they can't be recycled by conventional methods because the collection facilities are not equipped to deal with items that small. So how do you recycle them?

Originally the only way you could recycle a Nespresso coffee pod was to take it to a Nespresso boutique. Now Nespresso has partnered with Terracycle and Toll Couriers to improve the accessibility of the program. You can now drop off coffee pods at selected participating florists all around Australia. There are more than 340 drop off points across the country. From there Toll couriers pick up the discarded pods and transport them to a Nespresso recycling facility where the aluminium is made into more coffee pods or other aluminium products. If you don't live near a collection point, you can buy specific plastic collection bags at the post office and mail your pods to Nespresso boutiques.

Nespresso no longer partners with Terracycle in the USA and the only place you can physically drop off your pods is at one of only 45 Nespresso boutiques across the country. Alternatively you can order a prepaid UPS postage bag when you order your pods, which holds about 200 traditional capsules.

In Canada there are 19 collection points. As well as Nespresso Boutiques, the pods can also be taken to selected Home Outfitters stores.

Does recycling solve the problem?

The crux of the matter is, we are addicted to convenience. So if quick and easy is our addiction, why would people spend time disposing of coffee pods if we can't be bothered to spend an extra minute making coffee? Nespresso has even admitted this is the case. In a customer enquiry email they told us "The uptake of our recycling initiatives has been limited to date due to a lack of accessibility at national level to recycling collection points." This shows that recycling coffee pods takes effort and research for consumers – something that most people aren't prepared to do. 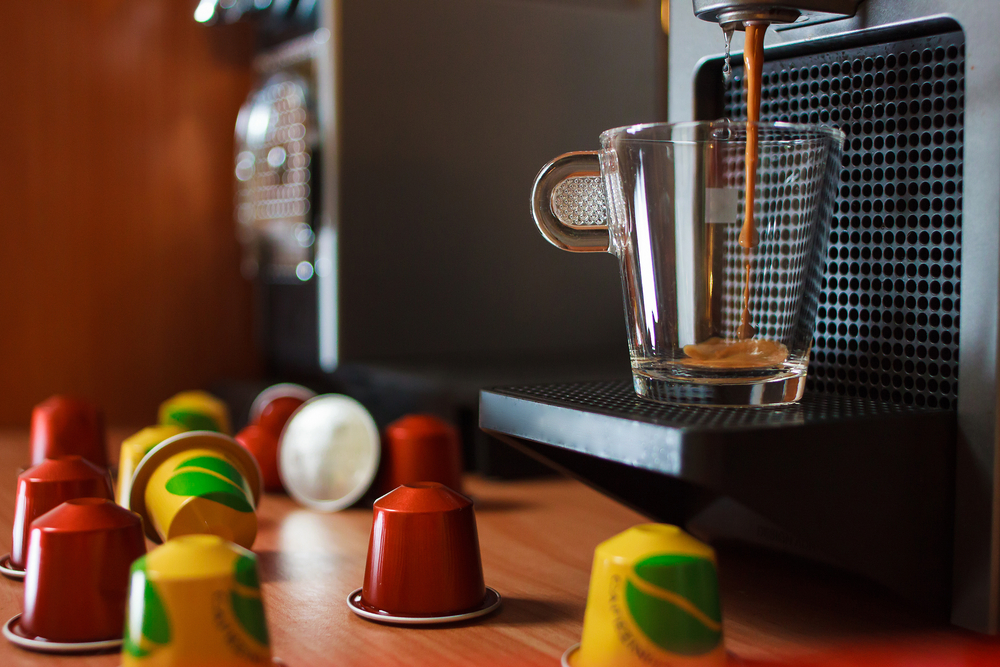 You're probably thinking "But I recycle mine! I'm doing a good thing!" and we found that most people we talked to in the 1 Million Women community do recycle their Nespresso pods, which is an amazing start. But when you dig a little deeper, does recycling actually take away the problem? Or is it a band-aid solution to the much bigger issue of single use items in our society?

At the end of the day – buying something increases demand. And even if you recycle them, that doesn't mean everyone will. What Nespresso has done is clever. They know a large percent of the market is becoming environmentally conscious with their personal decisions. Through the recycling scheme they've retained the portion of the market that would potentially abandon them if they couldn't recycle and have therefore been able to continue on producing masses and masses of single use items.

Even if you do recycle your coffee pods, there's your carbon footprint to consider. The production, distribution and collection of coffee pods use massive amounts of energy in factories, stores and transportation, not to mention the waste that goes along with those processes.

Not even all of the participants are on board with the program. One Sydney florist told us she would rather see people not use coffee pods than recycle them.

"It's a way to keep the product on the market when everybody's being a bit more environmentally conscious," she said. "They approached us, because they like their product to be associated with places that smell good and look pretty."

Even the guy who invented the coffee pod in the '80s said he feels bad about it because of the environmental damage the pods have caused in the years since.

Ultimately, the problem is not whether they can be recycled or not. Of course it is better to recycle something than not but the bottom line is that it's better to not produce the waste at all.

If you want to go coffee pod free, have a look at our article about alternatives to coffee pods here.

Eva Davis-Boermans is a van enthusiast and waste free guru. She can often be found trawling the beach for rubbish, hunting in op shops or surfing. Eva has written for Global Hobo and you can read more of her work here, and watch a film she made about women who surf here.

Read this next: What Our Love Affair With Coffee Pods Reveals About Our Values