Is Australia really doing enough for the Great Barrier Reef? Why criticisms of UNESCO’s ‘in danger’ recommendation don’t stack up

In case you missed it, last week the World Heritage Centre of UNESCO revealed its draft decision to list the Great Barrier Reef as "in danger" — a decision that appeared to shock the Australian government.

In an opinion piece published yesterday in The Australian newspaper, Environment Minister Sussan Ley acknowledged climate change is the biggest threat to the Great Barrier Reef, and that it "has been through a few rough years".

She has also suggested, however, UNESCO's draft in-danger decision is a surprise and was politically motivated. Neither of these claims is credible.

So let's look at Australia's reaction so far, and why criticisms of UNESCO's draft decision don't stack up.

The poster child for climate change

An in-danger listing of a World Heritage property recognises a decline in the "outstanding universal value" that makes the site internationally significant. It sets off alarm bells to identify the underlying causes of decline, and triggers stronger interventions to prevent further damage.

Ley foresees a negative effect of the proposed in-danger listing on reef tourism. However, there's no evidence from the Galapagos Islands, the Belize Barrier Reef or the Everglades National Park — all World Heritage properties and tourism hotspots — that an in-danger listing led to any discernible impacts on tourist numbers.

Most tourists, international or domestic, are already well aware of the pressures facing the Great Barrier Reef, but they are still keen to see it. From 2015–2018, more than two million visitors each year used a tourism operator to visit the reef. During 2020, COVID led to significant decline in visitor numbers so this period has been particularly difficult for the tourism industry. 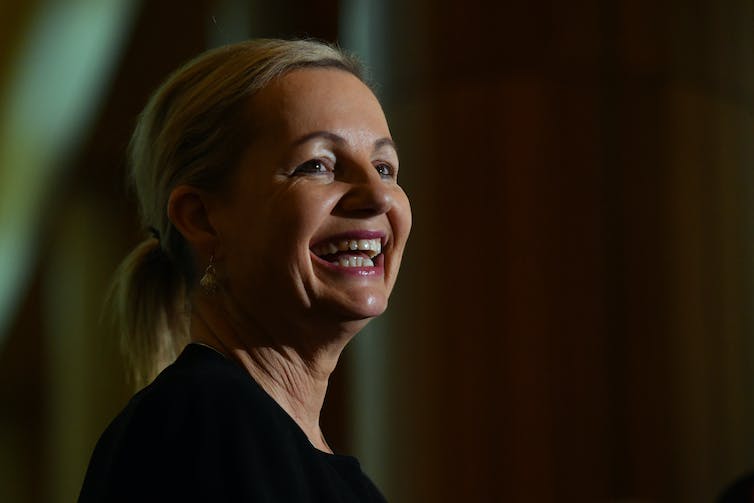 Ley also claimed Australia, and the reef, didn't deserve to be the poster child for climate change perils. But why can't they be? The Great Barrier Reef is one of the most obvious examples of the costs of inaction on anthropogenic climate change.

The Great Barrier Reef was inscribed as a World Heritage Area in 1981. And for the past two decades Australia has meticulously documented its ongoing deterioration.

According to Australia's regular reporting to UNESCO, the major causes of the reef's decline in outstanding universal value is pollution from agricultural runoff, which has now been eclipsed by heat stress from climate change.

Extreme summer temperatures in 1998, 2002, 2016, 2017 and 2020 have reduced coral cover and changed the mix of species, altering the biodiversity and other World Heritage attributes of the reef for many decades to come.

Unless global warming is stabilised soon, the reef will become unrecognisable. Indeed, in 2019, Australia's latest five-yearly Great Barrier Reef Outlook Report projected the future of the reef as "very poor".

Ley also suggests Australia is doing everything it can to protect the reef — but is it really?

UNESCO certainty doesn't think so. The draft decision from UNESCO, which will be considered next month by the World Heritage Committee, noted that interventions to reduce inshore pollution over the past five years have been "largely deficient". 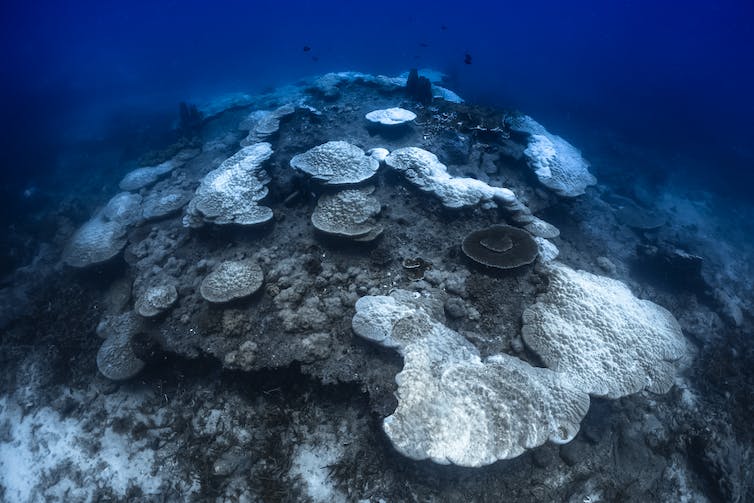 There has been slow progress in meeting reef water quality targets. Shutterstock

There have been some positive achievements in reducing water pollution levels. But the slow progress in meeting many of the water quality targets is documented clearly in the 2017–2018 and 2019 reef Water Quality Report Cards, produced jointly by the federal and Queensland governments.

UNESCO cites Australia's poor progress on reducing emissions as an additional area requiring considerable improvement, to meet the objectives of the Paris Agreement and Australia's responsibilities under the World Heritage Convention.

UNESCO has also asked Australia to work with it to develop corrective measures and to ensure the revised Reef 2050 Plan — the overarching framework for protecting the reef to 2050 — addresses the threats.

An in-danger listing is a call to arms to all countries to work together to save the reef from human-caused heating. So the ongoing collaboration between Australia and UNESCO could then enable the Great Barrier Reef's removal from the in-danger list.

Is Australia suddenly being singled out?

Ley wrote that the Great Barrier Reef was suddenly and unexpectedly "singled out" for an in-danger listing, which she interpreted as a suggestion that "Australia can single-handedly change the emissions trajectory of the whole world".

However, the dialogue between UNESCO and Australia on the Great Barrier Reef's protection has a long history. And in making its in-danger recommendation, UNESCO acknowledged Australia "on its own cannot address the threats of climate change". But UNESCO does appear to have concerns about Australia's record on emissions reduction.

For example, in 2011 the World Heritage Committee expressed "extreme concern" over the approval for liquefied natural gas facilities on Curtis Island within the boundary of the Great Barrier Reef World Heritage area. A year later, it asked Australia to ensure coastal development isn't permitted if it effects the outstanding universal value of the property. 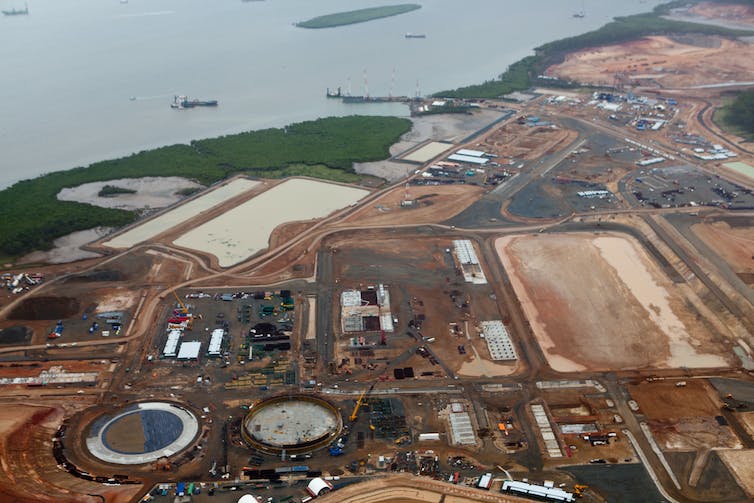 A 2012 photo of the gas project at Curtis Island. AAP Image/Supplied by Greenpeace

In 2012, 2013 and 2014, prior to the annual meetings of the World Heritage Committee, UNESCO raised the possible inscription of the Great Barrier Reef on the in-danger list.

Significantly, in 2017, the World Heritage Committee emphasised the importance of state parties (countries adhering to the world heritage convention, such as Australia) undertaking the most ambitious implementation of the Paris Agreement. This is an important pathway to reduce the risks and impacts of climate change on World Heritage properties.

UNESCO invited all state parties to act on climate change under the Paris Agreement "consistent with their common but differentiated responsibilities and respective capabilities".

So what are Australia's responsibilities?

Ley is correct to point out that all 29 World Heritage listed coral reefs, scattered throughout the tropics, are extremely vulnerable to human-caused climate change. 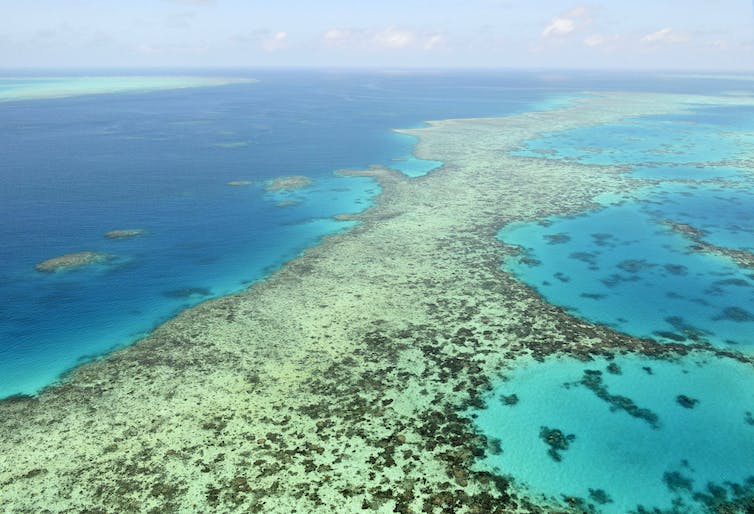 The federal government says it's worried about what an 'in-danger' listing will do to the reef's tourism. Kyodo News via AP

However, Australia is responsible for the world's largest coral reef system, and has far higher capabilities to reduce greenhouse gas emissions than other, less wealthy countries.

But Australia's record on protecting ecosystems and people from climate change is comparatively very poor. And despite being responsible for 20 World Heritage Areas, we have one of the highest per capita emission rates in the world.

The federal government continues to spruik a fossil-fuelled, gas-led COVID recovery, with ongoing subsidies for new coal mines. This support for coal and fossil gas is inconsistent with Australia's commitments to the World Heritage Convention.

Rejecting the science-based assessments by UNESCO is further damaging Australia's reputation as a laggard on addressing climate change. Surely, Australia can do better.