Your Drive To The Shops Makes Life Pretty Noisy For Whales

As unlikely as it may seem, your drive to the supermarket is responsible for a lot of noise pollution in our oceans – and a lot of stress to marine life as a result.

Of course, it's not the specific sound of your car trundling along the street that the fish and whales hear. But many of the products that feature in your weekly shop – from the goods you buy, to the petrol you burn, to your car's component parts – contribute to marine noise pollution.

Let's start with the oil. Before we can drill the oil or turn it into fuel to drive our cars, oil companies have to discover it.

Companies look for oil using high-pressure airguns. These machines are towed across the surface of the ocean, firing off sounds to determine the make-up of sediment layers in the seafloor. These are some of the loudest human-created sounds – researchers working in the middle of the Atlantic Ocean have been able to record the sounds produced from coastal oil surveys. 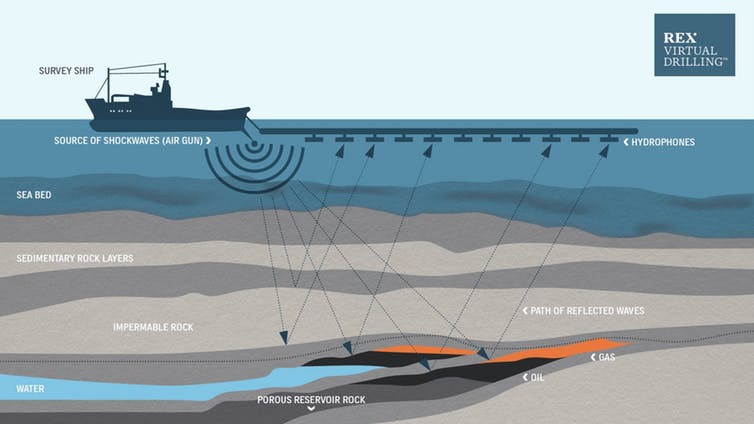 These sounds are problematic for marine life. Whales and other animals that rely heavily on sound for communicating and finding food are most affected. Hearing is to these animals much the same as vision is to humans. Unusually loud sounds can disturb whales' behaviour and, if they are close enough, can damage their hearing. There is even some suggestion that the airguns can cause whale strandings, although this is not yet completely certain.

Currently, one-third of all oil comes from offshore sources and this proportion is expected to increase. This can only mean more bad news for our marine life.

What about the metal box that consumes all the oil? Parts for the car are sourced from all over the world and have to be shipped across our oceans. In turn, the raw materials needed to make these parts are usually shipped in from yet more places. The commercial shipping needed for all this represents another problematic source of ocean noise. 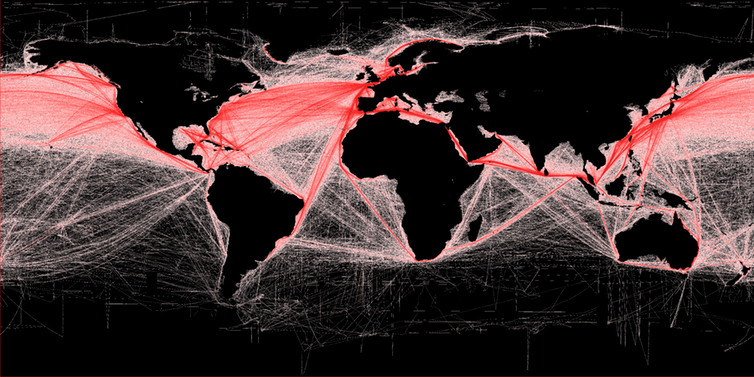 The contributions of individual ships may seem trivial in comparison to the loud noise from airguns. However, the world merchant fleet includes around 52,000 ships. Collectively, these increase the ambient noise levels in our oceans. In fact, the amount of low-frequency sound in some parts of our oceans has doubled each decade over the past 60 years.

Humans perceive only some of this sound, because of the very low pitches involved. But these sounds are well within the frequency range used by baleen whales. Recent work suggests that this constrains the communication ranges in whales, causing chronic stress and potentially interrupting mating behaviour. 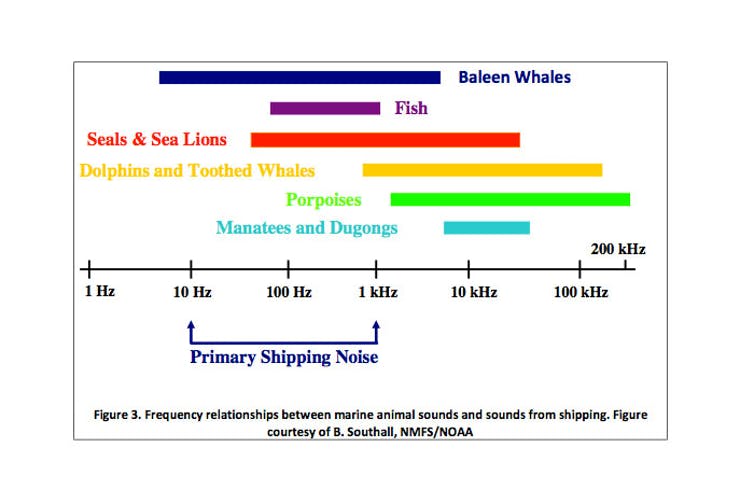 Parts of the ocean are filling up with man-made noise, and that presents many dangers to marine life. B. Southall/NMFS and NOAA

Oh, and most of your groceries are shipped around the world at some point too, as are many other consumer items – including the battery in your hybrid car, if you have one. Around 90% of world trade is carried by commercial ships at some stage. Not all of this ends up in your shopping bag, but a large proportion enters the consumer market at some point.

Certain grocery items, such as fish, originate from the oceans themselves. Like cargo ships, fishing vessels produce noise from their engines and propellers, but they also have noisy fish-finding sonars and winches as well.

The good news is that noise pollution, unlike chemical pollution, dissipates quickly. This means that the future for underwater noise remains bright. If you want to give the whales a break, just drive a little less, or support higher efficiency standards for vehicles. This will not only reduce oil consumption, but also the wear and tear on your car, meaning that fewer replacement parts will need to be shipped in. 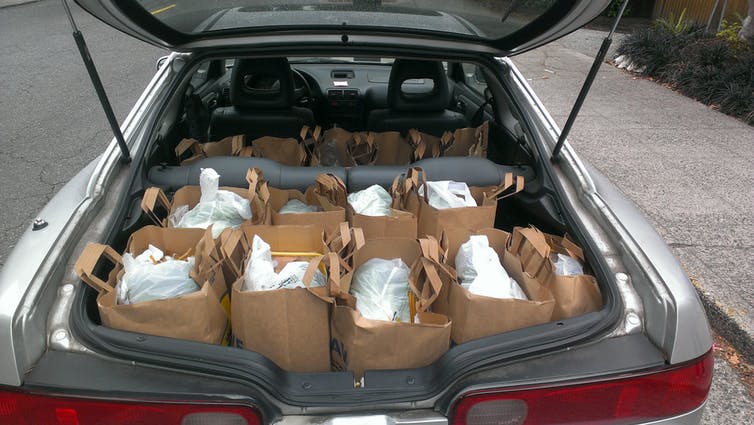 You can also buy locally produced items and support the local economy too. That way everyone wins.

No matter how connected we think everything is, the situation is generally even more complicated than we can imagine. So next time you walk to the shops and buy an apple grown in your state, you should allow yourself a moment to feel good about yourself, safe in the knowledge that you have helped to make the oceans a tiny bit quieter.

This article originally published in The Conversation

Read this next: Here's Proof The Fashion World Is Changing