Have you ever wondered why you feel healthier and happier when you stroll through the trees or frolic by the sea? Is it just that you're spending time away from work, de-stressing and taking in the view? Or is there more to it?

For more than 20 years, scientists have been trying to determine the mechanisms by which exposure to biodiversity improves health. Japanese scientists pioneered the search when they travelled to the island of Yakushima, famous for its biodiversity.

The Japanese already had a name for the experience of well-being in nature: shinrin-yoku or "forest bathing". 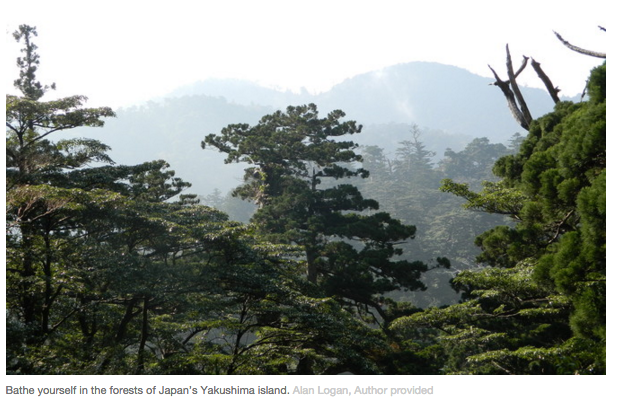 We do know that a diverse ecosystem supports a varied and beneficial microbial community living around and inside us.

We also know that exposure to green space, even within urban environments, increases our physical and mental well-being. But what are the mechanisms?

The Japanese researchers suggested that we are taking in beneficial substances when we breathe forest air.

From birth to the grave, beneficial bacteria surround us; they live in the environment and, importantly, in the air we breathe. We also share almost our entire body with them. The more interaction we have with them, the happier and healthier we are.

This is in part due to our gut-dwelling bacteria, which break down the food we cannot digest and produce substances that benefit us both physically and mentally.

Plants and the bacteria living on them can produce essential oils to fight off harmful microorganisms. These are referred to collectively as phytoncides, literally, "plant-derived exterminators".

Research on the health benefits of plant essential oils is in its infancy. But one recent study found that a phytoncide from Korean pine trees improved the health and bacterial make-up of pigs.

Notwithstanding some of the pseudoscience that gets wrapped around negative ion generating machines, there is evidence that negative air ions may influence mental outlook in beneficial ways. There are relatively higher levels of negative air ions in forested areas and close to bodies of water. This may factor into the benefits of walking in a forest or near the ocean.

But as the German writer Goethe once said:

Nature has neither kernel nor shell; she is everything at once.

Bacteria, essential oils and negative ions interact and influence each other. For example, negative ions and phytoncides may dictate the microbial make-up within a natural environment. There is evidence that this could also be taking place in the human gut.

More to be done

Nature-relatedness, or biophilia in which an individual feels connected to nature, has been linked with better health.

But we have a long way to go before we can more fully understand the mechanisms by which an innate love of nature can benefit our health. An important part of this discussion – an overlooked one in our opinion – is further understanding of an individual's connection to nature.

Psychologists have convincingly demonstrated connections between nature relatedness and mental well-being. But how does a greater personal affinity to nature interact with dietary habits, personal microbiome, physical activity levels and many other lifestyle variables that might be intertwined with having such an affinity?

In the meantime, while scientists turn over stones and search for important mechanistic clues – including those related to biodiversity – there are many simple ways to capitalise on our biophilia. 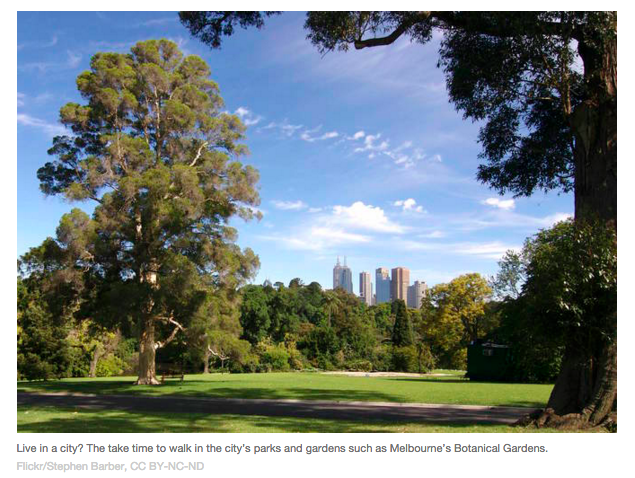 th by exposing them to more green environments as they work, rest and play. The US-based Children and Nature Network is a great resource of research news and activities bringing children and nature together.

In the World Health Organization report Connecting Global Priorities – Biodiversity and Human Health, released in December last year, it was concluded that:

Considering 'microbial diversity' as an ecosystem service provider may contribute to bridging the chasm between ecology and medicine/immunology [… ] the relationships our individual bodies have with our microbiomes are a microcosm for the vital relationships our species shares with countless other organisms with which we share the planet.

It is easy to see that discussions of natural environments and human health are no mere matter of intellectual fancy.

In a paper published last month in Journal of Physiological Anthropology, we've called for more research into the links between biodiversity and human physical and mental well-being, particular in relation to childhood, that most formative of times.

The article originally appeared on The Conversation.

Read this next: Hug a tree. Science says it will make you feel better.

Read this next: Wild Child: Why our children need to be in nature