Why sustainability is more than a fad

According to Biosphere Tourism , "Nowadays you don't just have to be sensitive to the environment but also show it. If you dare to not do so, you will be not just irresponsible, but also uncool."

So how true is this?

Generation Y (generally defined as people born between the early '80s and the early 2000s, which includes yours truly) is coming of age. As such, they have real spending power, which means companies have to sit up and take notice of what this soy-latte-sipping, organic-carrot-munching generation has to say.

Any company worth its salt is shifting attention towards branding that's more planet and people-conscious. At the same time (and especially as a result of the huge amount of information available on the Internet), Gen Y are pretty switched on when it comes to working out which companies are greenwashing, and which are genuinely committed to creating a better world.

Millennials are not only able to detect greenwashing practices, but also punish them through social networks.

A study conducted by Nielsen found that 55% of consumers "will pay extra for products and services from companies committed to positive social and environmental impact".

In fact, companies all over the world are starting to change their way of doing business in order to be more sustainable. This is more than just wanting to do something good: it also looks good for their brand, which can help them gain respect from customers and industry.

Companies and individuals alike are feeling more pressure to act environmentally, be it reducing waste, investing in clean energy or just planting some trees. Here at 1 Million Women, we encourage people all over the world to reduce their carbon footprint by taking our carbon challenge, which might include switching from fossil fuels to renewable energy (have you heard about our mates over at Powershop?).

Walk instead of drive. Reuse rather than discard. Buy local rather than shop two towns over. These are simple but effective ways people can reduce their carbon footprint and contribute to a greener planet.

So is this just a fad for "weekend environmentalists"? Well, the data collected by the Nielsen survey speaks for itself: 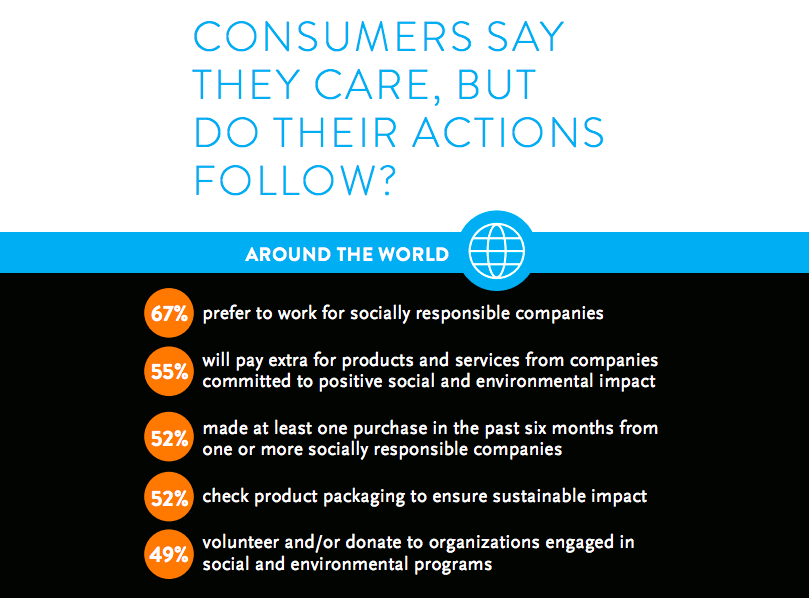 People DO care about acting environmentally, and it doesn't look like that's going to change anytime soon, thanks to the huge amount of evidence for extreme climate change and global warming. Unlike the hippie movements during the 60s and 70s, it's becoming harder for climate deniers to sound smart.

What's more, it seems like sustainable living has been picked up by a whole lot of other groups: clean-eaters, yoga enthusiasts, hipsters, travellers and students on a budget.

The thing that really amazes me about the environmental movement today is that it's actually pretty cool. When I tell people that I work for an environmental organisation, I get high fives and pats on the back. Keep Cups presented at cafes no longer get eye rolls and sneers, but get thumbs up and a free upsize to a large coffee (yum!). Bicycles have overtaken the car as the ultimate transport accessory, while recyclable, fairtrade, organic and low-carbon products are receiving superstar treatment.

Gen Y is also more interested in travel, volunteer work (the Neilson survey found that around half of Gen Y participants say they actively engage in volunteer work and/or donate monetarily to organizations involved in social and environmental programs) and politics. Considering this period of life is significant for forming values, beliefs and ideas, it's likely that those exposed to environmentalism and sustainable living will continue this practice throughout their lives.

So to all those of you who are still on the fence about sustainable living, let me ask you this: what will you say when your kids ask you what you did to try to save the planet?

And besides, there are worse ways to spend your evening than cooking pasta sauce made from the organic tomatoes grown in your back garden.

READ THIS NEXT: Why living like a hipster is good for the planet