A former colleague who was a researcher and promoter of local food systems once argued that local meat markets connect children with reality. "If young people do not have a direct experience with food", he told me, "they might think it originates on supermarket shelves. Local butcheries improve food literacy and reduce the disconnect between consumers and their choices." Many would dispute this approach today, but I get the point. The question is: how does it sit with what we know about food and the environment?

At the same time, it is not possible to regard all locally sourced products as more sustainable than food imported from distant places. Before it gets on our plate, food typically goes through several months of preparation, production, storage and distribution. The ecological efficiency of this cycle depends on several factors such as the quality of soil, weather conditions, suitability of climate, methods of production and storage.

So to better understand the planetary impact of our diet, we need to evaluate our food choices from a variety of perspectives. And while the shipping distance offers one variable, it is not the only one. As a matter of fact, transport emissions are relatively small for most food items, accounting only for about 10% of all emissions.

One stark exception is when food is airlifted instead of shipped via sea or road. In cases such as the Kenyan green beans or Mauritian pineapples that are flown around the world, transport can account for more than 90% of the items' overall carbon footprint. 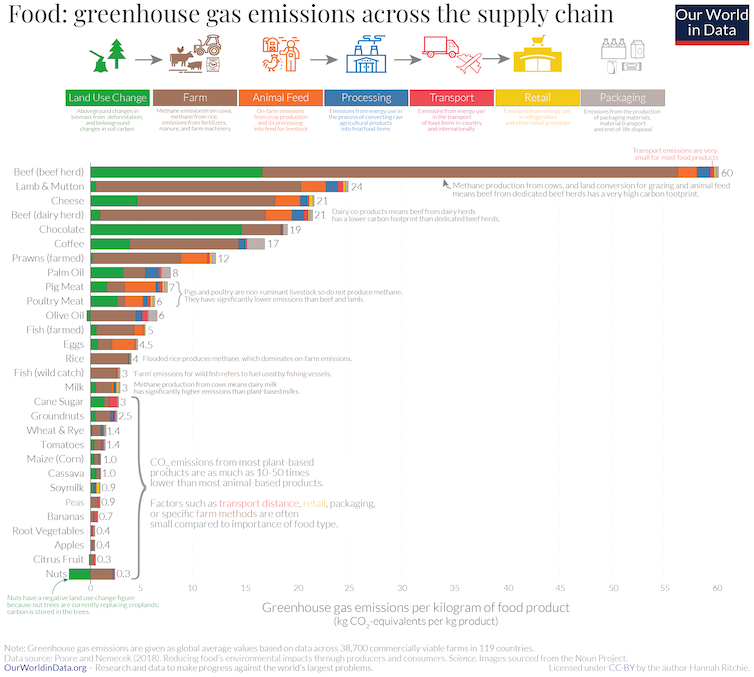 Beef, mutton and cheese cause the most greenhouse gas emissions per kilo. Our World In Data. Data: Poore and Nemecek (2018), Science, CC BY-SA

According to a study in Science, summarised by Our World in Data in the chart above, the two biggest culprits in greenhouse gas emissions are changes in land use such as converting forests into fields or pasture, and farming processes. The latter includes methane emissions from ruminating animals and rice production, emissions from organic or synthetic fertilisers, and machinery. Together, these two factors make up more than 80% of the footprint for most foods, a staggering amount compared to the 10% from transport. Likewise, emissions are comparatively negligible from all other post-production activities combined, including processing, retail, and packaging.

One major challenge today is an overall increase in demand for meat products. The infographic above clearly shows the vast emissions differences between plant-based and animal sources, with beef herd at the very top (60 kg CO₂ equivalent per kilo) and nut trees at the lowest end of the scale (just 0.3 kg CO₂ equivalent per kilo, partly because nut trees often replace croplands and then store carbon in the trees).

Almost without exception, meat items score extremely badly. Fishing seems to do better than other meat industries at 3-5 kg CO₂ equivalent per kilo, but it is now being intensely criticsed for plastic pollution and other harms. Nonetheless, while plant-based items are generally far more sustainable, some also score poorly such as coffee, cocoa and palm oil.

Another important point is that comparisons between the emission rates of identical food items often need to be made on a case-to-case basis. The UK cannot by default claim its tomatoes are more sustainable than those produced in Spain, for example, or vice versa. If they are grown in heated greenhouses in the UK and unheated ones in Spain, the latter will most probably cause far less environmental harm even if transported abroad. However, if they are produced in greenhouses in Spain and in open fields in the UK, the British ones could be the more optimal choice, subject to some other factors such as fertilising and energy use. 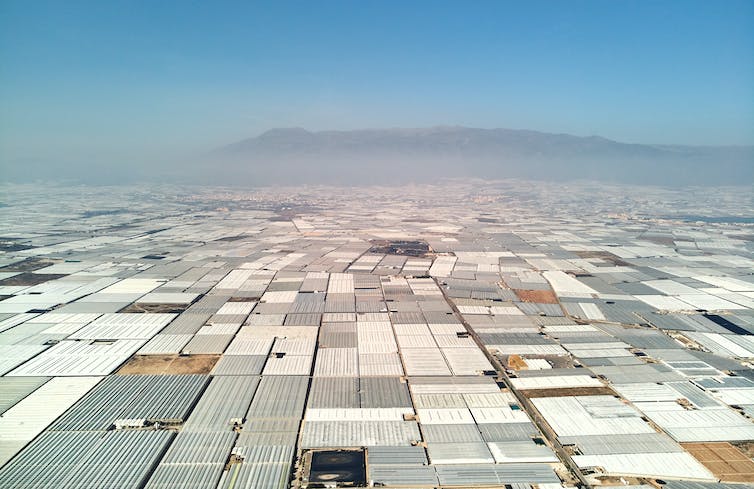 So sustainable buying is not as straightforward as simply checking whether an item is locally sourced or not. Due to the lack of a standardised footprint labelling system, catering more sustainable foods requires the consideration of multiple factors.

As a rule of thumb, one can be almost certain that meat products, local or not, are less sustainable than vegetables imported even from the furthest point of the globe. Medical or ethical considerations aside, emissions from meat are simply too high, a fact which makes food miles a negligible part of the comparison.

Of course, some plant-based items also cause lots of emissions, but this is not related to their transportation. The meat of grazing animals remains the worst choice from an emissions perspective. Let us remember this before we next chew on our local mutton. And for food literacy training, we can show children what real tomatoes look like before they land on their chips or pizza.