​MJ and Erin worked together 14 years ago, staying in contact via the occasional 'like' or comment on Facebook. Yet, via her facebook posts, MJ was to have a profound impact on Erin's life. This is the story of how first MJ, and then Erin, adopted a vegan lifestyle.

MJ: 26 August 2015 was the last time I ate anything with an animal product in it. It was butter. One of the things I had previously been sure I couldn't live without.

I'm a butcher's daughter, my Daddy was a butcher's son. My consumption of meat lessened over the years, and when trying to fall pregnant, I stopped eating meat altogether. Five years on from that, I had been thinking about transitioning to veganism for some time. How could I so actively be a voice for animal welfare - wanting to save every animal in the pound - but still eat cheese? And butter? And eggs? The decision had been coming, and on that day in August 2015 my decision was made.

What gave me the final push? The second speaker in a debate titled Animals should be off the menu*. Philip Wollen - Australian philanthropist, vegan and ex Vice President of Citibank - was that speaker. His 10-minute speech changed my life. Let this sink in:

"Only 100 billion people have ever lived. 7 billion alive today. And we torture and kill 2 billion animals every week. 10,000 entire species are wiped out every year because of the actions of one species. We are now facing the 6th mass extinction in cosmological history."

I knew as soon as I finished watching that speech that I was vegan and would never look back. In the first couple of months, there were times I felt like having butter, or chocolate, or cheese. But I didn't eat them. When I stopped for a few seconds to think about where they came from and why I made the choice to be vegan, it was easy not to reach for those foods. I did, however, made a mental note to never go to the movies at the last minute again, sans vegan snacks!

I then set about the process of going through every cupboard in my home to find out (and never buy again) any products made by companies who test on animals or contain any animal product. You'd be amazed – it was a far bigger job than I imagined.

Understand that your decision to become vegan will not be without difficulties. Including difficulties from other people who seem to think that you being vegan is some sort of challenge for them to get you to eat animal product again. So many people don't understand that it's a personal choice to change your lifestyle, not a diet that you might sway from.

I share vegan articles, and articles around the climate and the impact human consumption is having on social media continually. Almost no-one comments or I'm sure even reads what I post, which can feel disheartening.

Occasionally though, someone will reach out and ask you a question. Which will lead to a conversation. A meal. A shared experience. Over the past five years I have had a few people tell me that I am the reason they are now vegan, that they didn't know - until I started sharing - the devastation we cause by eating the way we do.

Do I expect everyone to be vegan? No. Don't get me wrong, I do dream of it, but realistically if my sharing can impact someone to reduce their intake of animal products, then I'm glad I've shared.

As I celebrate 5 years, 4 months of being vegan, I can confidently say that I will never not be vegan.

If you're thinking about transitioning, I encourage you to watch Earthlings. It's not an easy watch but it filled me with determination. 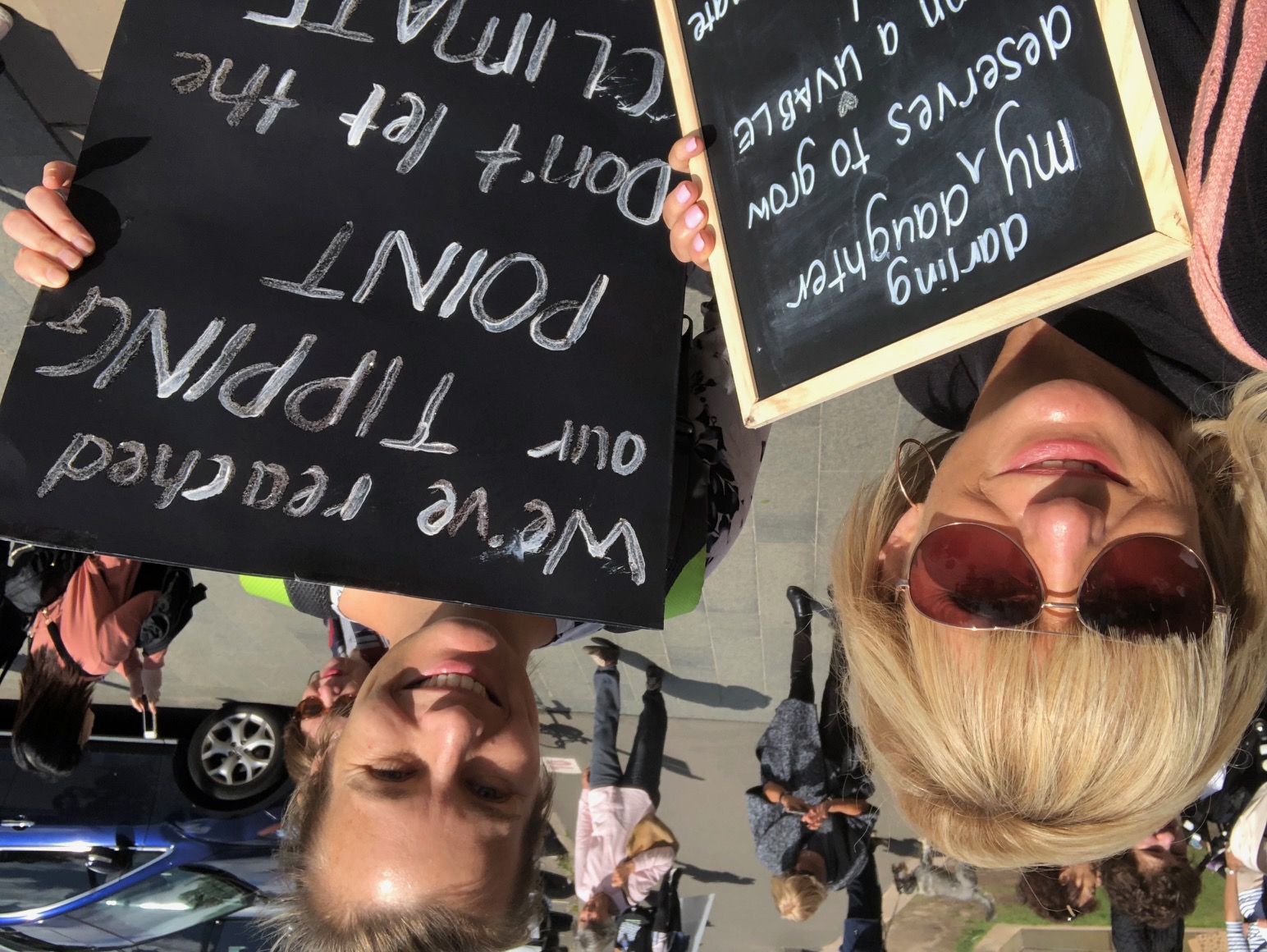 Erin: I didn't know what the word 'vegan' meant until MJ posted on Facebook that she was going to adopt a vegan lifestyle. I vaguely knew that people considered vegans a bit weird, but if you had have asked me to define veganism, I wouldn't have been able to. So, I googled it and I learnt that on top of not eating meat or fish, vegans don't eat dairy, eggs, or honey. They also don't use or wear products that contain animals such as leather, wool, or silk. At the time I wasn't even close to being vegetarian, so becoming vegan seemed pretty extreme to me.

As MJ continued to post about veganism, I started paying attention. She posted the 10-minute speech that made her switch from vegetarian to vegan and I watched it. There is one quote from that speech that I can still remember by heart:

"Cornell and Harvard say that the optimum amount of meat in a healthy human diet is precisely ZERO."

I was stunned and couldn't stop thinking "if we don't need to kill and eat animals to be healthy, why on Earth are we?".

But honestly, I still wasn't sold on the concept of veganism. MJ once posted something along the lines of "I wish the whole world was vegan!". I was affronted. I think I even rolled my eyes. "Typical vegan" I thought, "just because she's vegan, she expects the whole world to be''. It took me a long time to understand why MJ was so passionate. But her posts made me curious and I was determined to learn more. I became aware of the cruelty involved in the dairy industry which is vying with eggs for the title of cruellest form of animal farming. I researched the health implications of changing my diet, including which nutrients we can only get from animals (none, although I do supplement b12 and vegan omega 3). I joined some vegan Facebook groups and followed vegan activists and pages so I could learn more and I bought a vegan cookbook so I could figure out what to eat as I didn't have a clue how to cook an entire meal without meat, dairy or eggs.

I was definitely on the path to being vegan. I watched Cowspiracy, What the Health and Forks Over Knives (and more recently The Game Changers and David Attenborough's Extinction). It was through these documentaries that intellectually I came to understand that veganism was the right thing to do not only for animals, but for our children's futures, and for my own health. I had cut meat and fish out of my diet and was working on cutting eggs and dairy out too.

However, it wasn't until I was walking through Pitt St Mall in Sydney one afternoon when I saw video footage of a cow being slaughtered as a part of an animal rights event that I got it emotionally. It was so confronting to watch the animal fight - kicking and writhing - against his or her executioner. I had never really considered myself an animal lover (although I would now), but you don't have to love animals to understand that's not right. Who are we to inflict such torture onto another living being when we do not need to kill and eat them to be healthy?. I went home and watched all of the documentaries on animal agriculture and human exploitation of animals I could find: Lucent, The Land of Hope and Glory, Earthlings and later Dominion because as horrifying and traumatic as it is to watch the way we treat more than 72 billion land animals a year, I think it's worse to not watch it and continue to fund these industries under the guise of 'ignorance is bliss'.

I am now not only vegan, but I find myself using my voice for the animals too. Inspired by MJ's courage to speak up and compelled by not only the atrocious way in which we treat other vulnerable sentient beings, but also the way in which we are damaging the earth to do so, I too wish the entire would become vegan. I get it when you roll your eyes at the suggestion because I've been there. All I can do is ask that you keep an open mind and continue to learn about the way the world eats.

If you are considering going vegan, Veganuary is a challenge that runs throughout January and is a wonderful way to transition, I encourage you to sign up. I couldn't think of a more powerful New Year's resolution - changing to a vegan lifestyle has enormous benefits for the environment, your health and, of course, the animals. Thanks to MJ, I now know that being vegan means being opposed to cruelty towards, and exploitation of, animals. I doubt that there are many people in favour of those things, however most people will need to change the way in which they live their life so that their actions are aligned to their values. But those changes are worth it. I have now been vegan for 3 years and I can honestly say that, after eating an omnivorous diet for 36 years, my only regret about going vegan is that I didn't do it sooner.

* Watch Philip Wollen's speech or read the transcript. You can read more about Philip and the Kindness Trust here.

All images from Erin Remblance

Read this next: Words Matter: Why Climate Change Is Getting A Marketing Makeover