Two weeks ago, I found myself hitting the water on Norfolk Island, complete with a survey reel, slate and camera.

Norfolk Island is a small volcanic outcrop located between New Caledonia and New Zealand, 1,400 kilometres east of Australia's Gold Coast. It's surrounded by coral reefs, with a shallow lagoon on the south side that looks out on two smaller islands: Nepean and Phillip.

The island is picturesque, but like marine environments the world over, Norfolk Marine Park is subject to pressures from climate change, fishing pressure, habitat change and pollution.

I was diving in the marine park as a volunteer for Reef Life Survey, a citizen science program where trained SCUBA divers survey marine biodiversity in rocky and coral reefs around the world. We first surveyed Norfolk Island in 2009, then again in 2013, with an eight year hiatus before our return this month.

While the scientific analysis of our data is yet to be done, we can make anecdotal observations to compare this year's findings with prior records and photographs. This time, our surveys turned up several new sightings and observations. 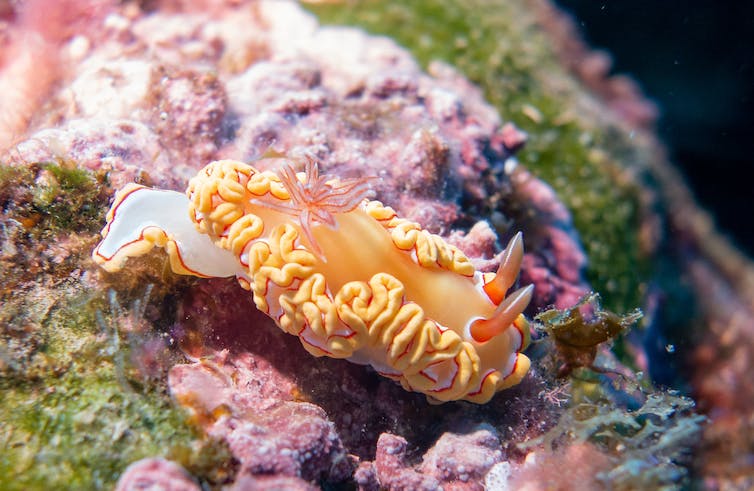 A red-ringed nudibranch (Ardeadoris rubroannulata). This beautiful little mollusc was a couple of centimetres long, nestled on the side of a wall covered in colourful algae. I had to look twice to notice it, but recognised it as a species I had seen before in Sydney. It had previously only been recorded in the Coral Sea, the east coast of Australia and Lord Howe island, so it was nice to get a record of it even further east in the Pacific. John Turnbull, Author provided

Diving under the waves in Norfolk Marine Park takes you into a world of crackling, popping reef sounds through clear blue water, with darting tropical fish, a tapestry of algae and hard and soft corals in pink, green, brown and red.

In these surveys we record fish species including their size and abundance, invertebrates such as urchins and sea stars, and habitat such as coral cover. This allows us to track changes in marine life using standardised scientific methods. 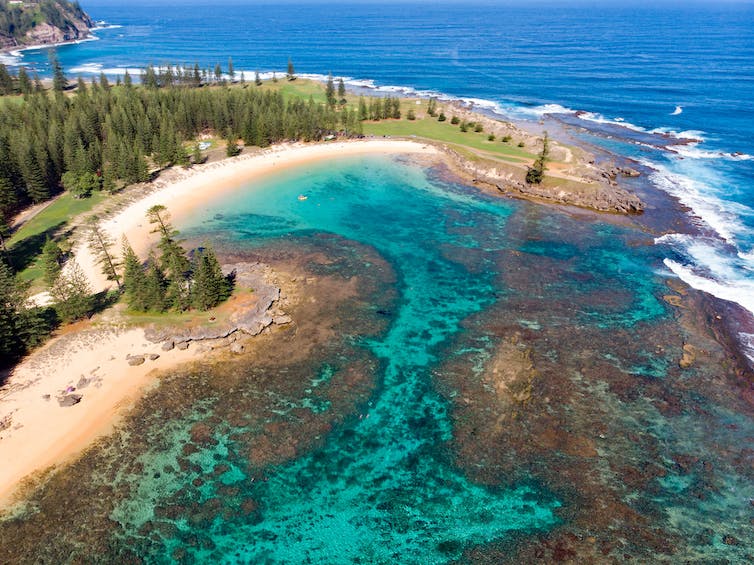 Emily Bay is a sheltered swimming beach at the eastern end of the lagoon, great for snorkelling too thanks to the diverse corals just below the surface. John Turbull, Author provided 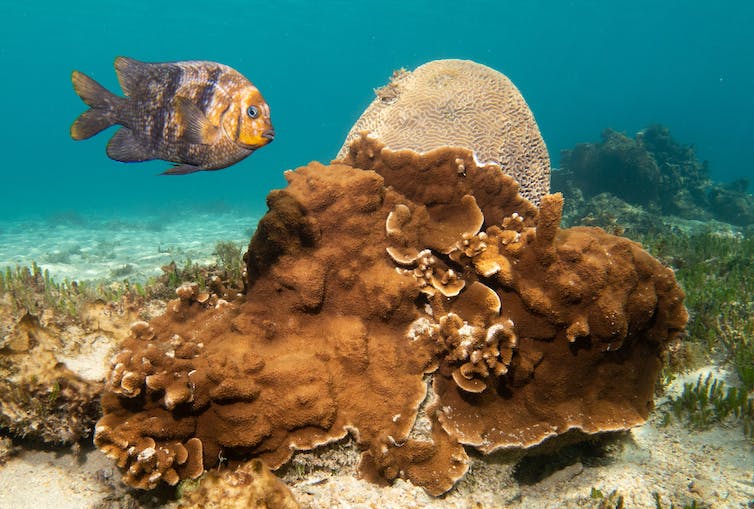 Banded parma are quite territorial — they charge you as you approach their turf. This one is guarding what it regards as its own personal coral clump. John Turbull, Author provided

Given recent major marine heatwaves and bleaching events in Australia, we were pleased to see healthy corals on many of our survey sites on Norfolk. We even felt there had been increases in coral cover at some sites.

This may be due to Norfolk's location. The island is further south than most Australian coral reefs, which means it has cooler seas, and it's surrounded by deeper water. I'm a marine ecologist involved in soft coral monitoring at the University of NSW, so I particularly noticed the wonderful diversity and size of soft corals. 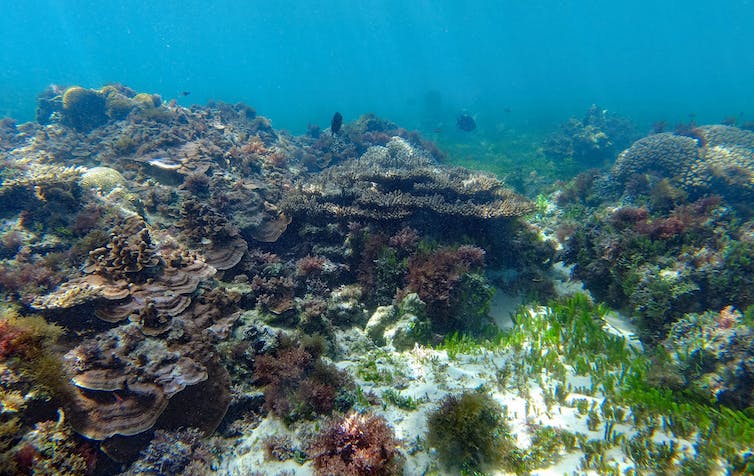 This photo shows the structure corals provide for fish and other animals to shelter in. They are the foundation for the whole tropical marine community. The corals here are a healthy brown — which comes from the symbiotic algae in their tissues – with no signs of bleaching. John Turbull, Author provided 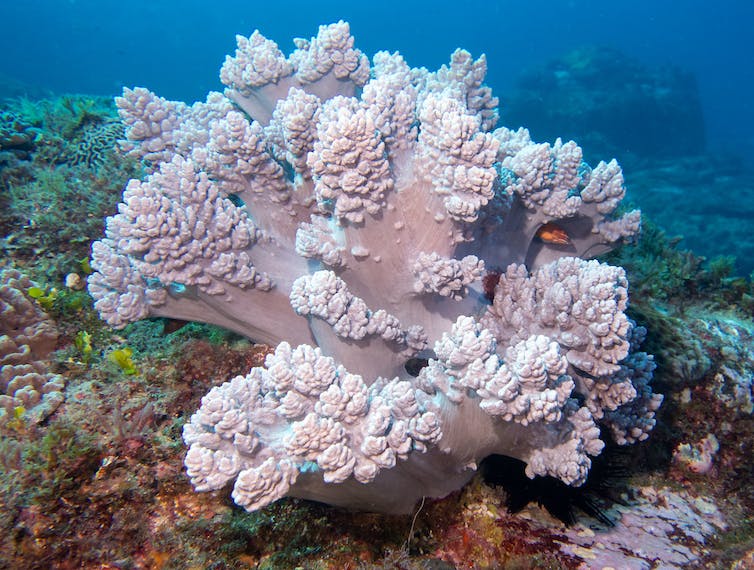 The soft corals on Norfolk Island are some of the largest I've seen. Their structure is made up of soft tissue, often inflated by water pressure, rather than hard skeleton. John Turbull, Author provided 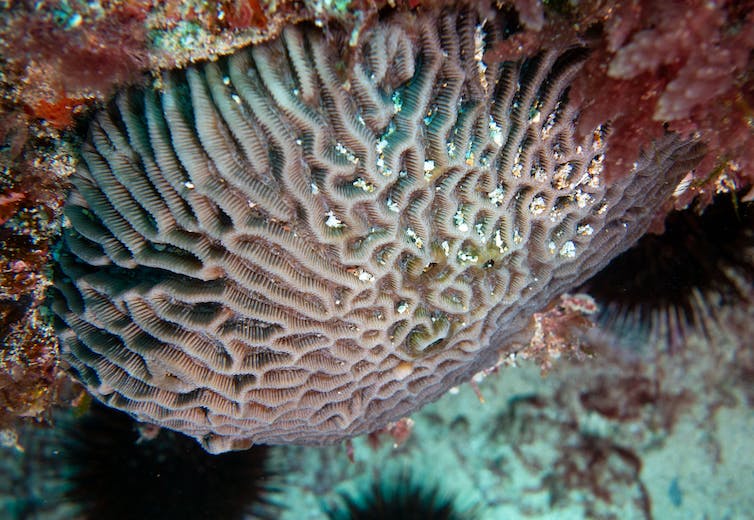 Hard corals come in a diversity of shapes and sizes, including this massive form growing on the side of rock wall. John Turbull, Author provided

I noticed generally low numbers of large fish such as morwong and sharks on our survey sites. Some classes of invertebrate were also rare on this year's surveys, particularly sea shell animals like tritons and whelks.

Urchins, on the other hand, were common, particularly the red urchin. Some sites also had numerous black long-spined urchins and large sea lamingtons.

These invertebrate observations follow patterns we see in eastern and southern Australia, where there are declines in the numbers of many invertebrate species, and increases in urchin barrens — regions where urchin populations grow unchecked.

The expansion of urchin barrens can threaten biodiversity in a region, as large numbers of a single species of urchin can out-compete multiple species of other invertebrates, over-graze algae and reduce habitat suitable for fish. 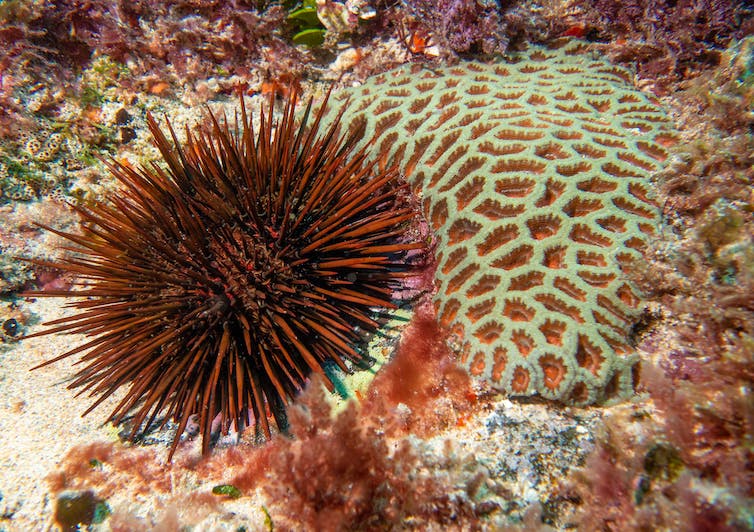 The abundant red urchin competes for space with other invertebrates, such as this one encrusting hard coral. John Turbull, Author provided 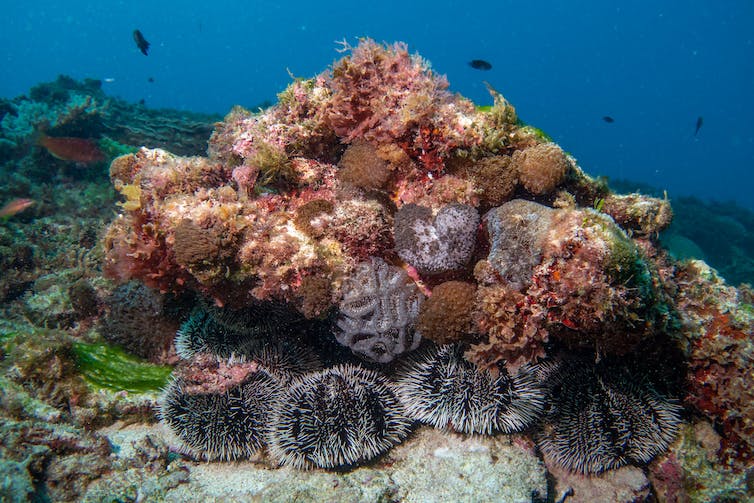 Lamingtons are an Australian cake (although there are claims they were invented in NZ!) and I love this descriptive common name for the Tripneustes gratilla urchin. The sea lamingtons on Norfolk appear particularly fat and happy, as they cluster in sheltered grooves during the day to avoid predators. They can also be different colours — I've seen them on the east coast of Australia in orange and cream, even with stripes. John Turbull, Author provided 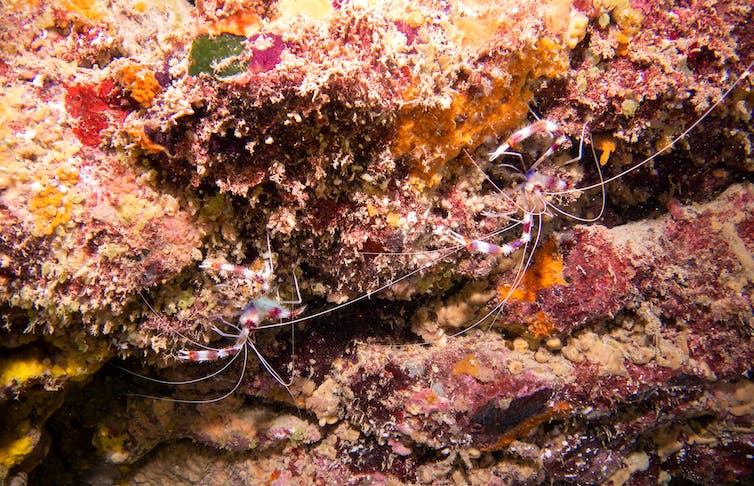 A pair of banded cleaner shrimp, which grow to 9cm long. They advertise their fish cleaning services with their distinct banding and white antennae. John Turbull, Author provided

A highlight of any survey dive is when you find an animal you suspect may not have been recorded at a location before, and I had several of those on this trip.

While some of these sightings are yet to be confirmed by specialists, they gave a buzz of excitement each night as we searched the records to confirm our suspicions of a new find. 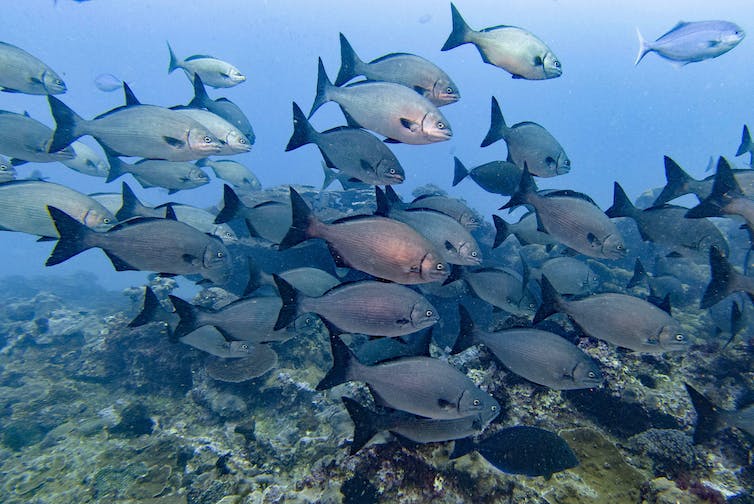 This big school of drummer circled us for several minutes on our first survey dive at Nepean Island. If you look closely you can see one of the fish is different, in the top right. This is one of a few blue mao mao circulating in the school – and a first sighting for Reef Life Survey at Norfolk. You might also notice another species in the school, the darker spotted sawtail down the bottom of the photo. John Turbull, Author provided

Other highlights for me included the warm welcome we received from the local community on Norfolk and the great turnout we had at our community seminar. Everyone I spoke to was supportive and encouraging when they heard we were on the island as volunteers doing surveys, and several people expressed interest in getting involved.

This is great news, as the best outcome is for local people to be trained to conduct their own local surveys. 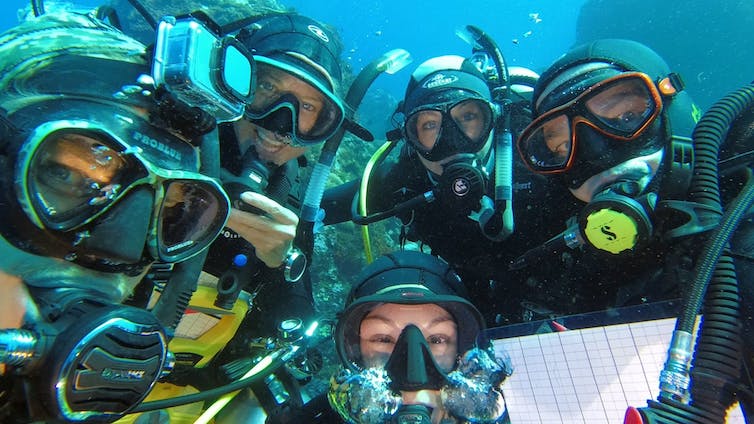 Tyson, Sal, Jamie, Toni and me taking an underwater selfie on the west side of Phillip Island, 10 metres below the surface. It's harder than on land, with your fins off the ground, everyone moving and bubbles to deal with. John Turbull, Author provided

Ideally we will return for comprehensive surveys of our 17 sites every two years or so, allowing us to plot trends over time. Only then can we hope to understand what is really happening in our marine environment, and make evidence-based conservation decisions. Having a skilled local team would make this easier and more likely to happen.

In any case, our 2021 surveys in Norfolk Marine Park, conducted by our team of five dedicated volunteers and supported by many others, give us one more essential point in time in the Norfolk series, and gave me some great memories to boot.

You can view my full photo album from the Norfolk Island survey here.