As global consumption of mobile phones and other devices soars, industry searches for ways to decrease the threat of chemical components to people and the environment.

Written by Rachel Cernansky this article originally appeared on Ensia

On a Wednesday in late February 2010, Hewlett-Packard hosted an unusual training session at its offices in Fort Collins, Colorado. The technology company had decided to eliminate polyvinyl chloride, or PVC — a type of plastic that releases harmful chemicals during production and when burned after disposal — from its power cords. But it realized that to get PVC out of its products, it was going to have to get its suppliers to do so, too. This training was an opportunity for those supplying power cables to the company (now known as HP) to learn about a tool that could help identify alternatives to PVC:GreenScreen for Safer Chemicals. Developed by the nonprofit Clean Production Action, GreenScreen provides a means of comparing hazard assessments of chemicals in order to choose safer alternatives.

“At HP, we buy a lot of power cables. We knew that because of our buying power, we could have some influence on what the industry was doing,” says Paul Mazurkiewicz, a technologist for materials at HP. “We went really far back in the supply chain, to the people that fundamentally make these materials, and we trained them on how to use the GreenScreen and let them know that HP would be making choices based on the GreenScreen in the future.”

HP is not alone: Around the world, electronics companies are working to reduce their use of chemicals that are known to be hazardous to human health, the environment or both.

From cellphones to computers to televisions, electronics are manufactured with a long list of substances that are known to be toxic, including metals such as lead and hexavalent chromium, and other contaminants such as phthalates and brominated flame retardants. They all serve specific roles: Lead is extremely effective as a solder, for example, and flame retardants keep our computers from bursting into flames while we type. But with many of these chemicals, there's a health trade-off: Hexavalent chromium is linked with cancer, for example, and lead causes irreversible damage to developing fetuses and children and can contaminate water supplies and harm plants and animals. 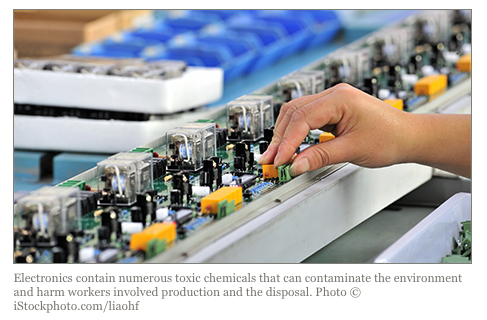 The use of such chemicals has given the electronics industry a reputation for jeopardizing the health of workers and the environment on both the manufacturing and disposal end of things. Some studies have suggested that electronics manufacturing workers, who are often exposed to chemicals such as benzene and lead that are known to have detrimental health impacts, experience elevated rates of certain cancers and other diseases. And globally, most electronic waste sent overseas is moved illegally to poor areas where people look to the waste as a source of income: They burn cables to get to the copper inside, for example, releasing extremely toxic substances such as cadmium, chromium and brominated flame retardants.

Growing awareness of these issues has led consumers to pressure companies to become more sustainable. They're aided in the process by ratings systems such as the Electronic Product Environmental Assessment Tool, or EPEAT, which gives consumers information they need to choose products that reduce the threat of e-waste.

Facing this increase in public pressure — including demand for highly rated products — as well as emerging regulations around hazardous chemicals, such as the Restriction of Hazardous Substances in Electrical and Electronic Equipment and REACHin Europe, the industry is finding incentive to change how it operates. That incentive is buoyed by initiatives such as theSustainable Purchasing Leadership Council in the U.S. andElectronics Watch in Europe, which encourage large-scale purchasers, such as governments, to prioritize sustainability in their product choices.

As a result, a growing number of companies as well as nonprofits and industry associations such as the International Electronics Manufacturing Initiative are working to reduce or eliminate the use of toxic chemicals in electronics products and replace them with safer alternatives. At the United Nations Environment Programme–hosted International Conference on Chemicals Management in Geneva last fall, participants, including more than 100 governments, non-governmental organizations and some industry representatives, signed a resolution detailing initiatives for reducing hazardous chemicals in electronics. Those initiatives include promoting public and private partnerships focused on product stewardship and extended producer responsibility; encouraging electronics designs that reduce the need for hazardous chemicals and allow materials to be recovered; working with retailers to expand sustainable options for consumers; and adopting policies that work toward hazardous chemical reduction. 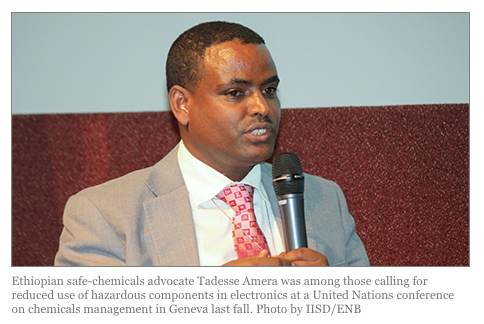 Delegates to the conference from several African countries that have become a growing outlet for electronic waste were prominent in the call for reducing the use of toxics in the first place.

"If you solve a problem at the upstream stage — if it's designed in a proper way, if the hazardous components are replaced by less or non-hazardous ones — the problem downstream will be less," says Tadesse Amera, a steering committee member ofIPEN, a global network focused on safer use of chemicals, who participated in the Geneva discussions. "We are not talking about waste. We are talking about the whole process. That was our argument, and we were accepted for that."

To eliminate certain chemicals, electronics companies need to know if and where they're using them in the first place. But modern supply chains have become so long and complex that many electronics companies don't actually know which substances are in all the parts they use in their products.

Ted Smith, coordinator of the International Campaign for Responsible Technology, has been talking with major companies such as Apple and Seagate to increase their access to such information. Seagate, he says, has come a long way.

"They've been able to get all their suppliers to disclose all of their chemicals, and they've got thousands of suppliers around the world. It's not an insignificant task," he says.

Eliminating a chemical from a product is not easy. A replacement substance — ideally, one that's safer — has to be found that can perform the same function as well or better. Reformulation may be necessary because the replacement may interact differently with the rest of the product.

Fortunately, the number of tools to help companies do this is also growing. GreenScreen gives companies like HP a way to identify hazardous chemicals and safer alternatives. Similar databases in Europe, such as the Substitution Support Portal, also help companies search for and evaluate alternatives to hazardous chemicals, as well as provide guidance on the process of chemical substitution.

While HP is working to get PVC out of its power cables, it has taken on a number of other challenges as well, including eliminating halogenated substances. Apple, meanwhile, has eliminated its use of lead, reduced its use of brominated flame retardants and eliminated PVC from its power cords — although it won't say what it uses instead, according to Smith, so independent observers cannot say whether the substitute is safer. It also has stopped using some solvents that are dangerous to workers during manufacturing, according to Joel Tickner, director of the Green Chemistry & Commerce Council, a project based at the University of Massachusetts Lowell.

"There's been a lot of writing about toxicity in the electronics supply chain. I think what's new is global collaboration, stronger focus on purchasing, collaboration among electronics companies really starting to dig into their supply chains," Tickner says. "That's what Apple and HP are doing."

Less to Throw Away

Despite efforts targeting specific chemicals, an enormous stream of electronic waste continues to enter communities in developing countries. And that waste stream only grows bigger and faster as electronics become cheaper (allowing more people to buy them) and as the industry plans obsolescence into its consumer products — encouraging people to buy a new phone every year, for example, and offering replacement products at prices equal to or cheaper than a repair when a computer or tablet is damaged. 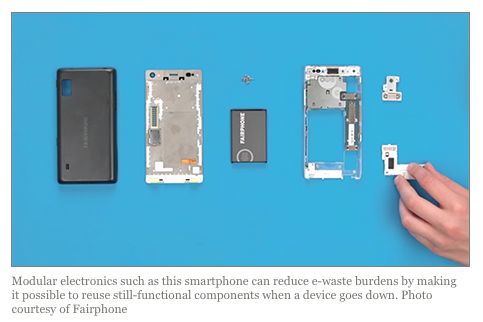 "Until we have better global systems for electronics take-back, we have to assume that these are going to be put back into the environment somewhere at the end of their life," says Tickner.

While there is little sign of take-back systems becoming commonplace, Sarah O'Brien, director of stakeholder engagement at EPEAT, sees some hope in the area of reducing — or at least slowing the growth of — the overall waste stream. She points to the nascent modular phone as an example of innovative thinking that can mitigate this aspect of the electronics life cycle: If one piece breaks, you can repair or replace that part, rather than the whole phone, reducing discards and thus their adverse environmental and health impacts. 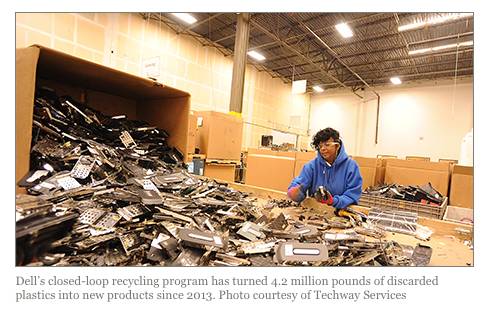 There are also efforts to turn things that would otherwise become e-trash into the raw materials for new products. Dell launched a closed-loop recycling program in 2014 that turns old plastics into new Dell products, for example. The program is focused on plastics, but the company is looking to expand the model.

As for HP, Mazurkiewicz says, "Ultimately, we want to make a fully edible computer. It sounds funny, but we want to get to the point where electronics fit very neatly into the circular economy — where maybe you mulch your computer at the end of the day, and grow materials that can be put into an HP 3-D printer."

Even though that might sound like science fiction, he says, "it's something we can achieve. But it's going to take time."

Much remains to be done, of course. The electronics industry innovates and grows at a pace that dwarfs efforts to phase out individual chemicals.

"It is an industry that's constantly churning, and where consumers are looking for more bells and whistles all the time," says O'Brien.

Still, the consensus seems to be that the industry is doing more than ever before, and momentum is growing. Georg Steinberger, vice president of environmental affairs and compliance at Avnet — one of the world's biggest distributors of electronic parts — supports further efforts still, including some sort of global standard regulating toxic chemicals in electronics.

"We would love to see global understanding on things like which hazardous substances should not be used," Steinberger says. "If a substance is dangerous, it's dangerous in any country. The electronics industry is not a clean industry. We are using lots of chemicals, and I think it's about time that we take some responsibility for the products we produce."

Read this next: Are Energy Saving Settings Bad For The Environment?