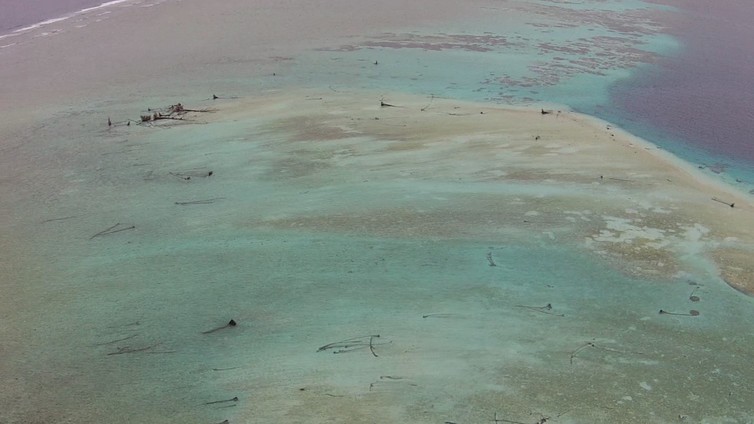 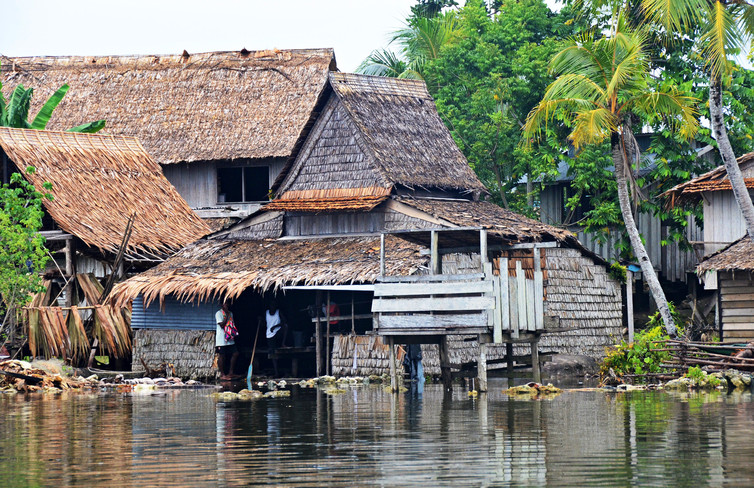 Recently at least five reef islands in the remote Solomon Islands have been lost completely to sea-level rise and coastal erosion, and a further six islands have been severely eroded.

These islands lost to the sea range in size from one to five hectares. They supported dense tropical vegetation that was at least 300 years old. Nuatambu Island, home to 25 families, has lost more than half of its habitable area, with 11 houses washed into the sea since 2011.

This is the first scientific evidence, published in Environmental Research Letters, that confirms the numerous anecdotal accounts from across the Pacific of the dramatic impacts of climate change on coastlines and people.

All that remains of one of the completely eroded islands. (Image: Simon Albert)

A warning for the world

Previous studies examining the risk of coastal inundation in the Pacific region have found that islands can actually keep pace with sea-level rise and sometimes even expand.

However, these studies have been conducted in areas of the Pacific with rates of sea level rise of 3-5 mm per year – broadly in line with the global average of 3 mm per year.

For the past 20 years, the Solomon Islands have been a hotspot for sea-level rise. Here the sea has risen at almost three times the global average, around 7-10 mm per year since 1993. This higher local rate is partly the result of natural climate variability.

These higher rates are in line with what we can expect across much of the Pacific in the second half of this century as a result of human-induced sea-level rise. Many areas will experience long-term rates of sea-level rise similar to that already experienced in Solomon Islands in all but the very lowest-emission scenarios.

Natural variations and geological movements will be superimposed on these higher rates of global average sea level rise, resulting in periods when local rates of rise will be substantially larger than that recently observed in Solomon Islands. We can therefore see the current conditions in Solomon Islands as an insight into the future impacts of accelerated sea-level rise.

We studied the coastlines of 33 reef islands using aerial and satellite imagery from 1947-2015. This information was integrated with local traditional knowledge, radiocarbon dating of trees, sea-level records, and wave models.

Twelve islands we studied in a low wave energy area of Solomon Islands experienced little noticeable change in shorelines despite being exposed to similar sea-level rise. However, of the 21 islands exposed to higher wave energy, five completely disappeared and a further six islands eroded substantially.

These rapid changes to shorelines observed in Solomon Islands have led to the relocation of several coastal communities that have inhabited these areas for generations. These are not planned relocations led by governments or supported by international climate funds, but are ad hoc relocations using their own limited resources.

Many homes are close to sea level on the Solomons. (Image: Simon Albert)

The customary land tenure (native title) system in Solomon Islands has provided a safety net for these displaced communities. In fact, in some cases entire communities have left coastal villages that were established in the early 1900s by missionaries, and retraced their ancestral movements to resettle old inland village sites used by their forefathers.

In other cases, relocations have been more ad hoc, with indivdual families resettling small inland hamlets over which they have customary ownership.

In these cases, communities of 100-200 people have fragmented into handfuls of tiny family hamlets. Sirilo Sutaroti, the 94-year-old chief of the Paurata tribe, recently abandoned his village. "The sea has started to come inland, it forced us to move up to the hilltop and rebuild our village there away from the sea," he told us.

In addition to these village relocations, Taro, the capital of Choiseul Province, is set to become the first provincial capital in the world to relocate residents and services in response to the impact of sea-level rise.

Interactions between sea-level rise, waves, and the large range of responses observed in Solomon Islands – from total island loss to relative stability – shows the importance of integrating local assessments with traditional knowledge when planning for sea-level rise and climate change.

Linking this rich knowledge and inherent resilience in the people with technical assessments and climate funding is critical to guiding adaptation efforts.

Melchior Mataki who chairs the Solomon Islands' National Disaster Council, said: "This ultimately calls for support from development partners and international financial mechanisms such as the Green Climate Fund. This support should include nationally driven scientific studies to inform adaptation planning to address the impacts of climate change in Solomon Islands."

Last month, the Solomon Islands government joined 11 other small Pacific Island nations in signing the Paris climate agreement in New York. There is a sense of optimism among these nations that this signifies a turning point in global efforts.

However, it remains to be seen how the hundreds of billions of dollars promised through global funding models such as the Green Climate Fund can support those most at need in remote communities, like those in Solomon Islands.

This article originally appeared in The Conversation.