The road beyond Paris: getting to zero emissions

If we're serious about getting to a world with zero greenhouse gas emissions, how do we actually get there and in enough time to address climate change? Practically speaking, how do we do it?

Over the next several weeks, we'll begin to answer that question with a look at some of the key areas and developments that make it possible for us to hit those numbers mentioned in Paris. This week, we will look at efficient buildings.

According to Dr. Chuck Kutscher, director of the buildings and thermal systems center at National Renewable Energy Laboratory (NREL), if we're going to get serious about addressing climate change in the US, we've got to get emissions down as close to zero as quickly as possible. He's done the math and laid out two paths forward that get us to 60 and 80 percent reductions in emissions without a hit to the economy (and in fact, the opposite—see below) by 2030. Renewables have a huge role to play in this effort, but they can't do it on their own. To hit these targets, we have to do two things in parallel: 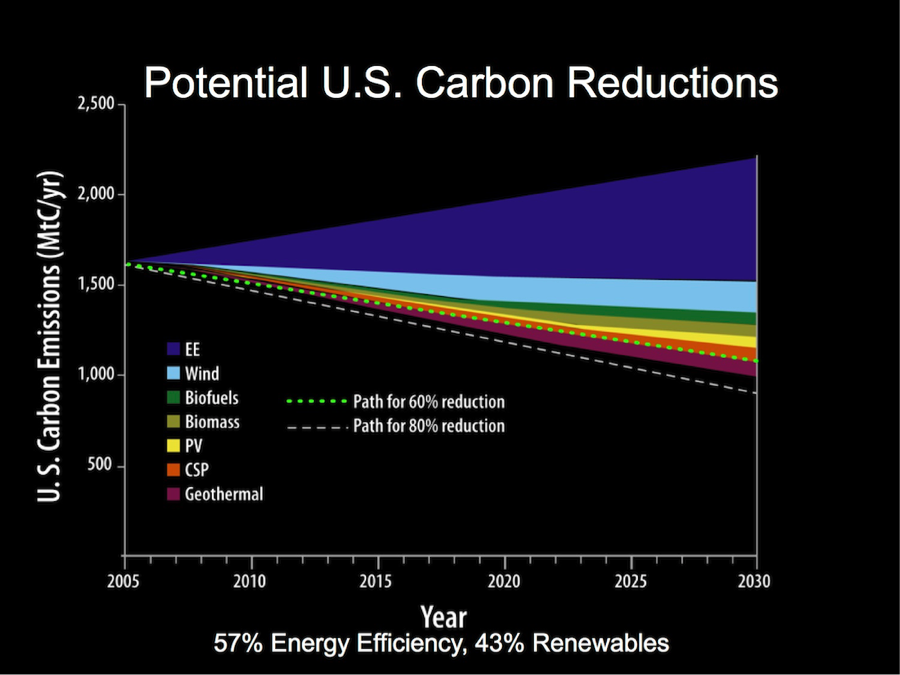 Put the two together and even with the upfront investment cost, we're still looking at about $80 billion in annual savings in the US. It's worth repeating that number:$80 billion in savings. And the other benefit? Real progress toward a world with a livable climate. (And in case that $20—26 billion figure seems steep, compare it to the $271 billion that Tufts University researchers estimated climate change would cost the US economy each year by 2025, and rising thereafter, if we continue with business as usual).

Admittedly, to some eyes, increasing energy efficiency lacks the cool factor (and dare we say, not inconsiderable sex appeal) of a Tesla Model X. But consider the huge potential emissions reductions and savings on offer if we can greatly increase the efficiency of the places we live and the tools we use, and it's clear that the area deserves a lot more attention. A whole lot more.

TIME TO GET SMART

Here in the US, buildings account for about 41 percent of the nation's energy use. Get those numbers down in a big way and we start making real headway on carbon pollution.

At the risk of oversimplifying, we can break these efforts down into two general areas: building energy efficient new construction and retrofitting existing properties to be more efficient. Each has its own set of challenges and each also has a unique set of opportunities when it comes to the potential for cutting emissions.

To see what this potential looks like, let's examine cities. Cities aren't just big contributors to climate change –accounting for 70 percent of global greenhouse gas emissions in 2011, according to the UN – but they're also where we'll see the most new buildings going up in the years ahead.

The stakes are not small here: the UN projects another 900 billion square feet of new and remodeled construction will go up all around the world by 2030 (an area roughly three and a half times what currently exists in the US ii). When you recall that US buildings now account for 41 percent of the nation's energy use – as just one example – the importance of cities getting efficiency right and ensuring the massive amount of development coming uses a lot less energy becomes immediately apparent.

Part of this comes down to the materials and technology that goes into the buildings. Part comes down to the kinds of buildings that cities develop. And part comes down to where they develop them. Again, at the risk of oversimplifying matters, take a look at the projected energy use of different kinds and locations of buildings and you'll see that by connecting good transit access with high-density (multiple unit) construction in an urban setting with green autos, cities can cut dwellers' energy use by about 70 percent, compared to suburban single-family development. 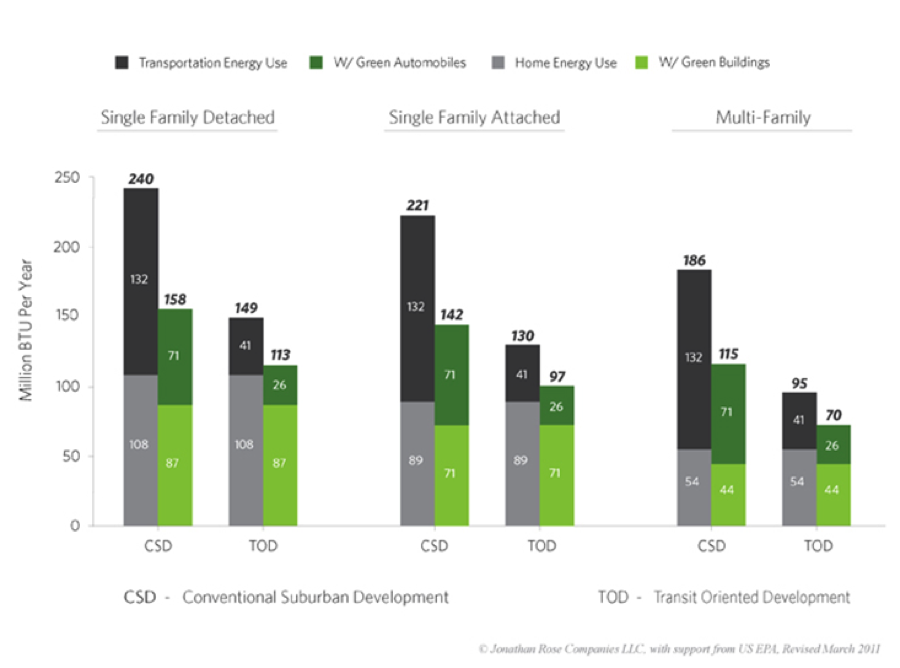 Which is where NREL's work in buildings and heat systems comes in. The lab is developing a series of tools that simulate and measure energy intensity and use at the level of both individual buildings and entire districts (many buildings). The goal is to help architects and planners to make smart choices in design, material selection, and layout to minimize how much energy buildings and districts as a whole need. Already, NREL's working with the City of Denver on plans for a couple of high-performance districts, including one to redevelop 130 acres of the National Western Center and Denver Coliseum site to get its net energy and water use and waste down to zero. The lab hopes districts like these can create a new model for development, laying out a practical way for cities to greatly reduce their emissions while also saving on energy bills.

It's also not just city planners who benefit. As more individual and commercial users start to see just how much money they can save without sacrificing the features they need, demand for high-performance buildings grows. As more homeowners choose high-performance features and homes, their neighbors see what's happening and want the same benefits and demand grows block by block until this approach becomes the new standard in the twenty-first century. Call it the Cool-Kid Theory of Change.

New construction is just one part of the solution, though. Particularly, as the architect Mahadev Raman noted in a 2009 article, "taking account of demolition, rebuilding, and overall growth, "about half of the building stock in 2050 will consist of buildings that exist today."

The implication? We also have to get serious about making the buildings we have much more efficient to get energy use and emissions down at the rate and scale we need. As Jamy Bacchus, senior sustainability manager with the firm YR&G, put it, "We can't build ourselves out of this; we have to address existing buildings." How we do this is its own discussion and one we'll have to save for its own piece.

SEALING WINDOWS AND SEALING THE DEAL

Along with the potential for helping achieve some huge emission reductions, the other thing increasing energy efficiency has going for it is that, as an approach, it makes sense no matter where you stand on the political spectrum and makes sense without the term "climate change" even entering the conversation. Left-leaning liberal? Chances are you like saving money. Hard-right conservative? Chances are you like saving money, too.

So while energy efficiency will never have the wow factor of a new solar technology, it could be just as – if not more – critical to addressing climate change as every renewable breakthrough in the years ahead. Real reductions in emissions are there for the taking – all without the nasty policy battles that accompany other efforts. It's time to reach up.

READ THIS NEXT: How renewable energy is expected to create millions of jobs and boost the world economy