In recent days, as Western Canada and the United States have been broiling under a climate-fuelled heat crisis, all sorts of superlatives have been used to describe never-before-seen temperatures: the British Columbia community of Lytton hit a mind-boggling 49.5 C on June 29, breaking all-time temperature records three days in a row.

People are understandably shocked and scared by those numbers. But should this have come as a surprise? No. Scientists have been warning about the link between longer, more intense heat events and climate change for over 40 years. The language of "normals" and "new records" is rapidly becoming meaningless.

But the notion that humanity should have known, or should have done something about the crisis earlier — that we should be ashamed for our lack of inaction — is unhelpful for dealing with the climate crisis.

The first thing to do is to spend more time talking about climate change. There is far too little discussion around this issue in the public sphere. Global heating is the biggest emergency the planet has ever faced, but one would not know it reading or listening to the news.

Last year, stories about climate change represented just 0.4 per cent of all major U.S. broadcast news coverage. In 2019, it was 0.7 per cent. Even in the midst of an unprecedented heat wave stretching from California to Yukon, references to climate change are few and far between.

Ironically, one of the biggest blind spots has to do with how information about this issue is shared with the public.

The conventional approach relies upon what's known as the "information deficit model." The deficit model builds on the assumption that people will take action on climate change if they have more information about it.

This information-based approach has shaped all sorts of communication, from public safety ads on drinking and driving to news reporting about climate and other important issues.

Unfortunately, the relationship between how much people know and how they act is not always linear. Feeding more facts to someone who is highly politically motivated to dismiss climate change will not convince them to pay more attention to the problem.

Climate change is a tricky story to wrap one's head around. It can feel too big, too scary and too difficult for any one person to fix. Information, while important, is not always enough.

For there to be engagement with this subject and, by extension, political action, the climate crisis must feel personal, relatable, understandable and, most importantly, solvable. 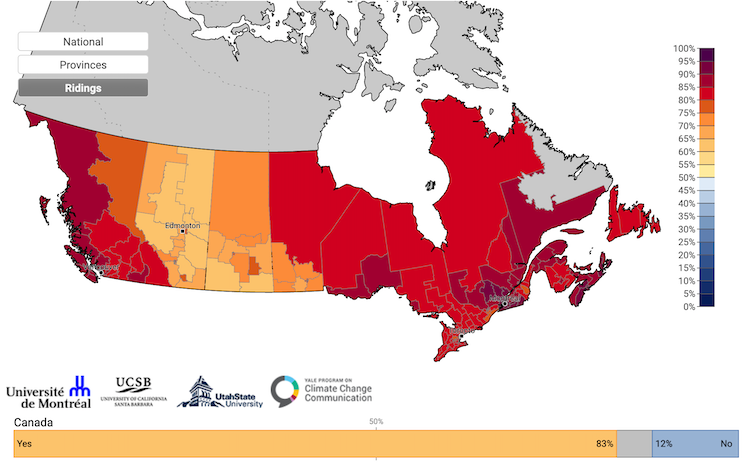 Estimated per cent of adults who think the Earth is getting warmer. The Yale Program on Climate Change Communication bears no responsibility for the analyses or interpretations of the data presented here. (Canadian Climate Opinion Maps 2018, YPCCC)

Charts and graphs — even polar bears — rarely achieve that goal. Eighty-three per cent of Canadians agree that the Earth is getting warmer. But just 47 per cent think climate change will harm them personally.

To have people connect on climate, we need to have more conversations about how people are working to solve it and how those solutions are improving their quality of life where they live. These conversations foist an otherwise abstract, intangible and scary subject into the realm of the everyday — and make it feel solvable.

Environmental communicators have long pointed to an excessive use of fear messaging around climate change as one of the main problems with engaging the public on this subject.

In the case of COVID-19, the sense of efficacy was clear: hand washing, social distancing, masking. With climate change, efficacy information is far less obvious, and more difficult to act upon.

It's often argued that the large emitters, notably fossil fuel producers, are the ones that harbour the most blame, and are responsible for cleaning up the mess. The Guardian points out that 100 companies are responsible for 71 per cent of emissions.

Yes, it's clear the world needs to stop burning fossil fuels — oil, gas and coal. But to get there, individuals can also set examples of what pro-environmental behaviour looks like. 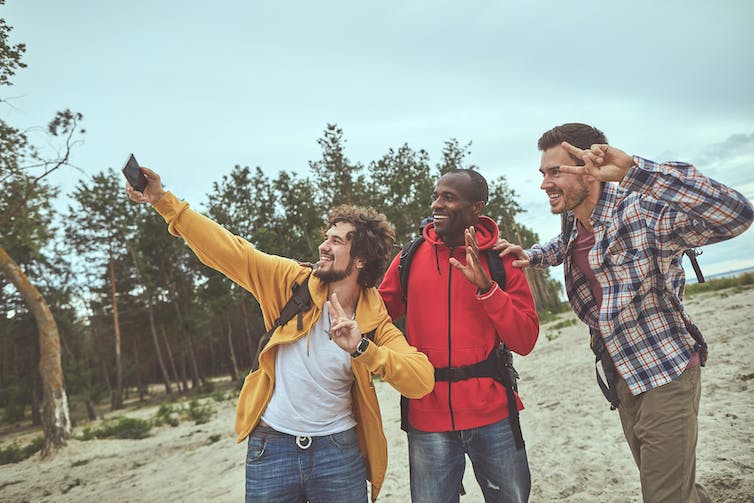 People can set examples of what pro-environmental behaviour looks like by posting photos of spending time in nature for their followers to see. (Shutterstock)

It can be as simple as posting photos to social media from community cleanup drives, nature walks or posts about any kind of pro-environmental behaviour, such as taking transit. This form of communication — as opposed to images that promote a high-carbon lifestyle — normalizes the urgency, importance and possibility of protecting the Earth.

Some of the most effective communicators are TV news meteorologists, who often have loyal followers. More of them are discussing ways the climate crisis is being addressed where people live.

Most communication around risk, builds on the standard of moral injunctions — that one should or must act to do something, or else. For example, a park sign might tell visitors not to feed the ducks because human food is bad for them. And yet, visitors keep feeding the ducks.

Instead, communicators should rely on "descriptive social norms," descriptions of behaviour that others, like them, are already doing and benefiting them.

In the United Kingdom, a 2015 campaign urged people to "Take your litter home, other people do." It was more likely to reduce illegal littering than signs that said "Please keep your park clean by not littering."

Solutions, notably in the form of stories about people and communities taking action to solve the climate crisis, are among the most effective ways of communicating the emergency.

The National Observer's "First Nations Forward" series is a great example of this type of reporting. Story after story details how First Nations communities in British Columbia are leading the way in the transition to a renewable-energy future.

Mainstream news media outlets, like the one I work for, Global News, are also spending more time on climate and rethinking how they cover it. One recent national story reported on the massive energy transition already under way in Alberta.

Some news outlets are spending more time reporting stories about climate solutions, such as the transition from oil and gas to renewable energy that is already underway. (Shutterstock)

Such stories about change that is working send a message that action to mitigate the climate crisis by ordinary people is doable, normal, empowering and desirable. They energize and mobilize members of the public ready to take action, by providing visual examples of who is leading the way.

They also move the conversation beyond the conventional emphasis on skeptics and deniers, and normalize pro-environmental values and behaviours for the growing number of people who are already alarmed or concerned about the climate emergency.

Far from driving the fear narrative, stories of climate solutions unlock people's sense of efficacy and agency in the face of impending danger. In other words, they engage the public on climate change by doing what all good communication does: meeting people where they are at, through a mobilizing story.

This is storytelling 101: engaging audiences, not turning them away, as most climate reports do.