Ratatouille is a common vegetable stew that originated from southern France. There is traditionally no particular cooking method for the ratatouille. Famous French chefs like Roger Vergé or Gui Gedda recommend lightly frying each vegetable separately to give them a crispy and toasty flavor.

In the Pixar film, Ratatouille, right at the climax, the little chef, Remy the rat, prepared the celebrated version of this simple dish to impress the food critic, Anton Ego. The dish in reality was a version of another similar dish called the confit byaldi developed by French chef Michel Guérard (founder of nouvelle cuisine) in 1976. For the film it was realized by American chef Thomas Keller who was the food consultant for the film. However Keller's version (or Guerard's confit byaldi) would miss out on the main idea of ratatouille, its crispness and the fact that each vegetable retain their own particular flavor.

Now let me come to my innovation. To retain the taste of the original ratatouille, we must fry the vegetables separately. However to impress Anton Ego and the viewers, it is better to finely chop the vegetables and arrange them in a pattern on a baking tray. So why not combine both the approaches, the French and the American. 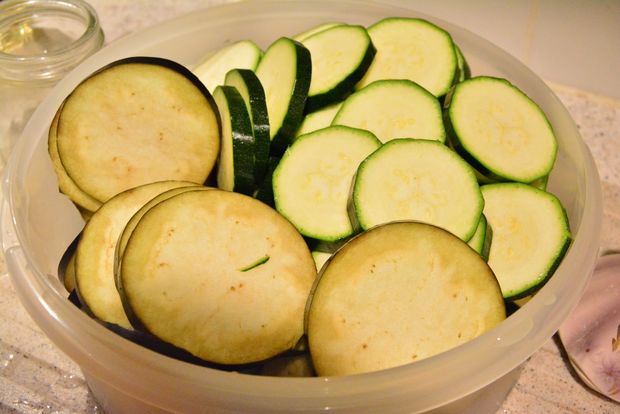 Chop the eggplant and zucchini in thin slices

Take a flat non-stick pan and shallow fry the eggplant for 1 minute at medium heat. 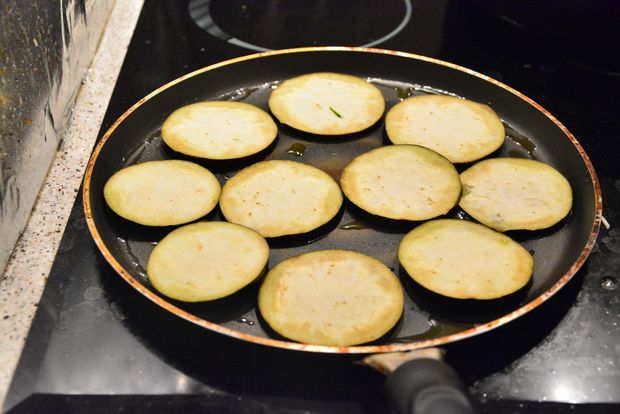 Change the side and keep for another minute.

Remove them from the heat and keep aside. Do not fry too much because they will Be cooked later in the oven.

Do the same for the zucchinis (shallow fry for a couple of minutes).

Chop the bell peppers in circular rings (discard the seeds and the central portion). 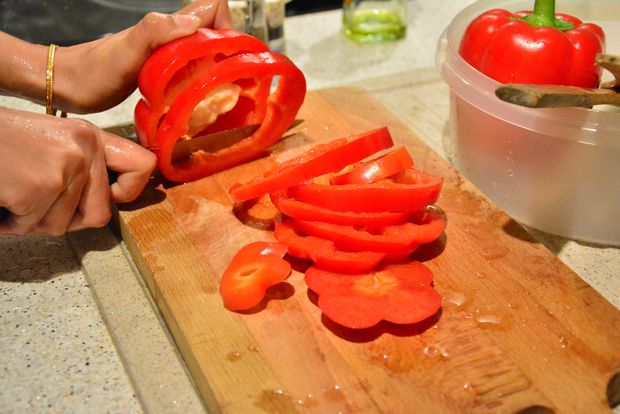 Shallow fry them in the similar way As the zucchini and eggplants.

Finely chop the onion and the garlic.

Pour 1 tablespoon oil on the a frying pan. When It Is warm, add the chopped onion and garlic. Season It with salt and pepper.

Fry them till they turn golden brown in colour. 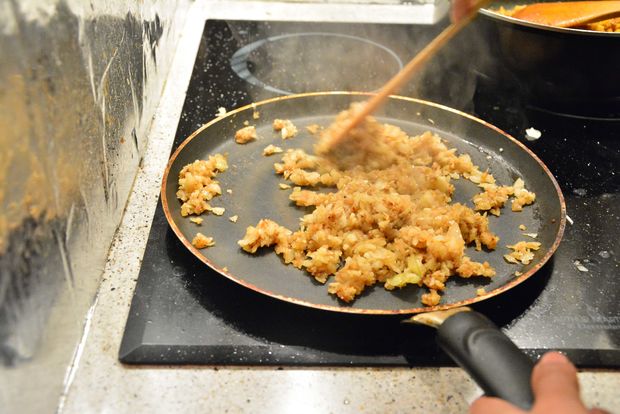 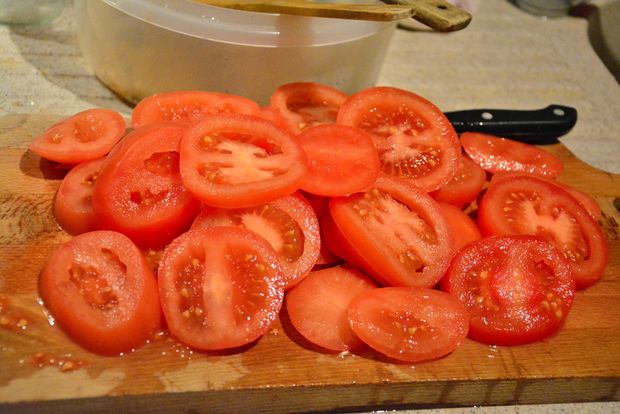 Take the fried onion and garlic in a bowl. Pour the tomato puree on It.

Stir and mix well with a spatula. 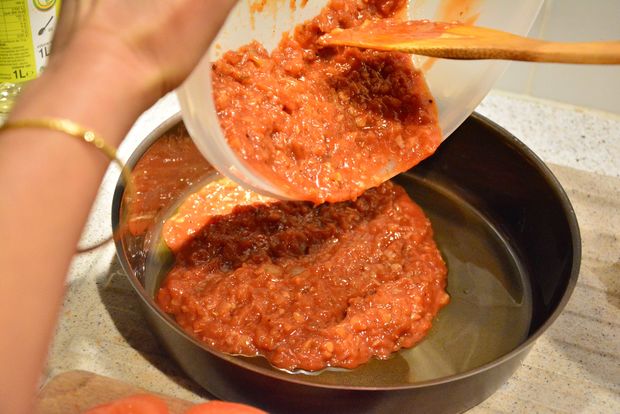 Place about 8 strands of fresh thyme and 3 bay leaves.

Arrange the fried vegetables and the tomatoes in a circular spiral pattern. Then place the rest of the fresh thyme strands and the bay leaves on the top and the sides of the vegetables. 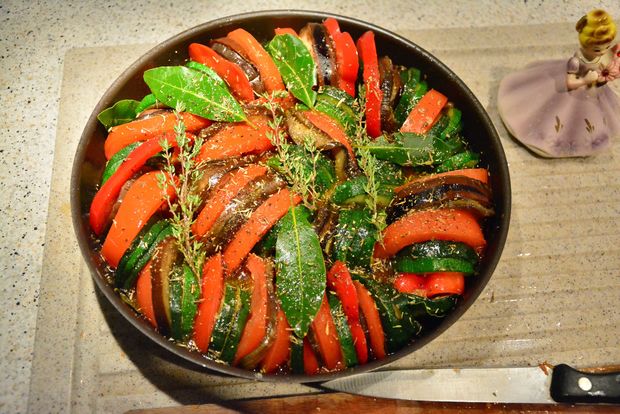 Season with salt and pepper, then cover it with a butter paper so that the vegetables do not get charred. 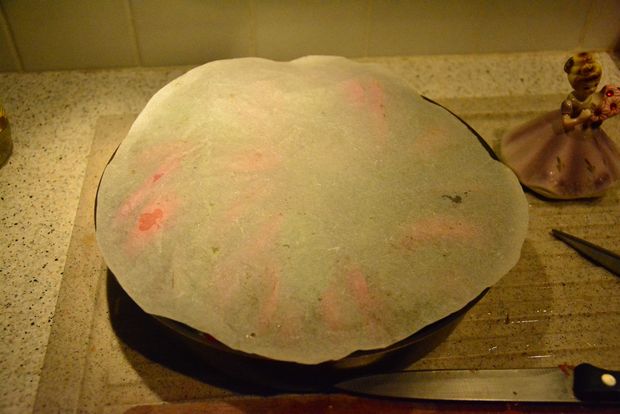 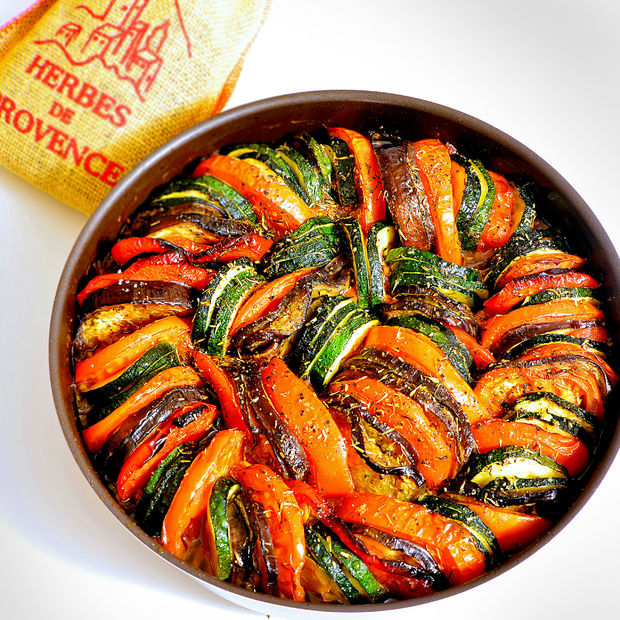 [This recipe originally appeared on Instructables by mitantig]