​A PAUSE TO STAND TOGETHER, THEN MAKE THE PARIS CLIMATE SUMMIT MORE IMPORTANT THAN EVER

Following the events in Paris over the weekend – and in recent weeks in Beirut – our hearts go out to the families and friends who have lost people they love, and whose lives have been irreparably changed.

In the lead up to the crucial two-week UN summit in Paris, which starts on November 30th, 1 Million Women paused our campaign build-up while France and others mourn.

We stand with the people of Paris and France, and those of the Lebanon, Turkey, and Russia whose citizens dominated the passenger list of the jetliner blown up in the skies over Egypt last month, and all others who have felt the pain of Islamic State terror.

Our hearts break at the obscene slaughter of Yazidi women in Islamic State-occupied northern Iraq, revealed in recent days through the discovery of a mass grave following the retaking of a strategic town by Kurdish forces.

Understandably, in the immediate aftermath of the Paris attacks, there were some who were questioning whether the climate summit, known in UN shorthand as COP21, could even go ahead.

That question formed in my mind too. I am booked to travel to Paris for the summit and to participate in a number of forums, including taking 1 Million Women's Anthem for climate action and hope to Gender Day on December 8th (more on this below).

Every fear the mind can conjure surges through you in terrible times like these, yet of course our lives and our purpose will and must go on,.

The news came through quickly that France was resolute and COP21 would still be going ahead.

I felt national pride when Australian Prime Minister Malcolm Turnbull, in Turkey for a G20 summit, assured media interviewers that he expected the Paris summit to happen and would still be attending along with other world leaders, and also with a Ministerial team from Australia. (The latter piece of detail reminded me of the unhappiest days for Australian participation in the annual UN climate talks two years ago in Warsaw, where Australia failed to send any Minister at all – but hopefully that's now just a bad memory from another era.)

So yes, I will be in Paris in two weeks' time. I will be there proudly representing 1 Million Women at the most important summit of all in the 21-year history of these climate negotiations, which followed the famous 1992 Rio Earth Summit, and that are now aimed at a new global treaty for the post-2020 era to keep global warming below 2 degrees C.

The pause to stand together while France mourns means we've decided to push back the launch of 'You're The Voice' to next week, a beautiful and ambitious campaign that 1 Million Women has been working on all year.

We secured the rights to the mid-1980s hit song 'You're the Voice', originally performed by John Farnham. With creative partners Andreas Smetena and Ken Francis, we had it re-recorded by some of Australia's leading women solo artists and set to an emotionally-powerful, yet joyous video clip.

In the meantime, you can help us make the launch next week a big as possible by joining our Thunderclap today. A Thunderclap is like a social media flash mob and will help spread our message far and wide.

For 1 Million Women, our version of 'You're the Voice' is all about climate change. We are calling it 'an anthem from women for climate action and hope'. Yet, inevitably the lyrics of this extraordinarily timeless song – written by Chris Thompson, Andy Quanta, Keith Reid and Maggie Ryder – may strike a wider chord in our troubled world.

This time, we know we all can stand together
With the power to be powerful
Believing, we can make it better


When I go to Paris in two weeks for the climate conference, I will be taking 'You're The Voice' with me. Now more than ever we must come together with hope for humanity and our planet.

Will you support our anthem launch via Thunderclap? It's as easy as clicking a button.

With your help, our anthem will capture the attention of governments and stand as a clear call for climate action and hope. 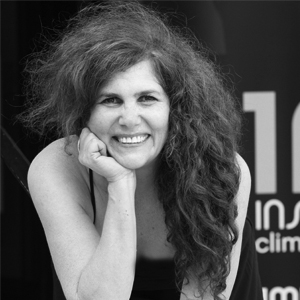