Mushroom tacos (the meat-free option everyone will love)

THIS IS A GUEST BLOG BY ONE INGREDIENT CHEF'S ANDREW OLSON

If it looks like I've lost my mind and started cooking with some kind of thinly-sliced beef, don't be alarmed…

Last year at a restaurant in Las Vegas, I ordered something called "setas tacos" which the waiter confirmed were vegan. As I was sipping a delicious pot of Oolong tea, my plate arrived and I was sure there had been a mistake: I was looking down at a corn tortilla piled high with slices of some kind of animal, for sure. Horrified, I picked through the thin brown slices and realized that they were, in fact, mushrooms! I built up the courage to taste one – it was chewy, juicy, salty, crispy, and perfectly seasoned. Over a year later, I still remember the taste of those mushrooms on that taco.

I was so inspired by this dish that I immediately went home and spent the next 3 months trying variation after variation to copy these magical little tacos. After much trial and error, I finally came up with a very close recreation that I'd love to share with you. 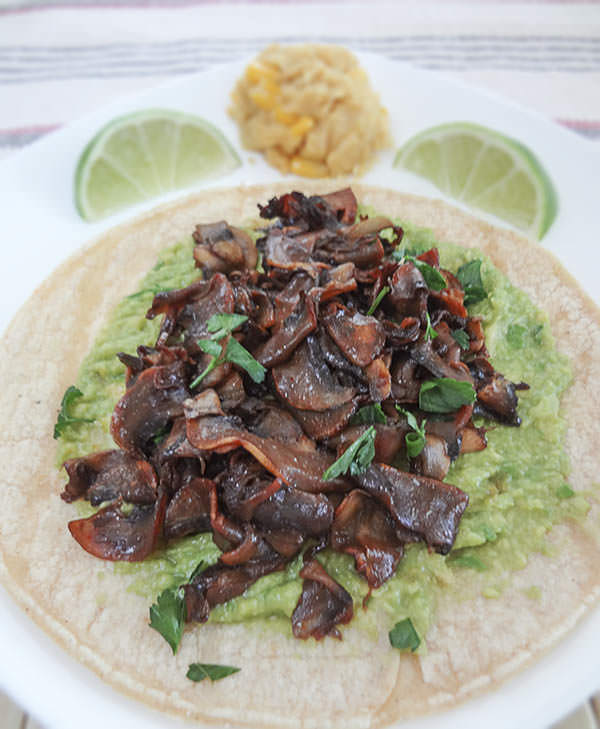 Step One – Prepare the Mushrooms

This is the most time consuming step and it is 1000x easier with a mandolin. You can slice them by hand, but you'll be working all day. It is absolutely crucial to slice the mushrooms paper thin (see the picture above). If they're too thick, you won't get the right caramelization and the final product won't be nearly as decadent.

The crazy part about this step is the sheer volume of mushrooms you'll be working with. They cook down so much that it requires probably about 2 cups of sliced mushrooms to make just 1 taco. If you notice that huge pile of mushrooms in the last picture above, that's barely enough for two tacos. Rule of thumb: when you think you have enough mushrooms, quadruple it. 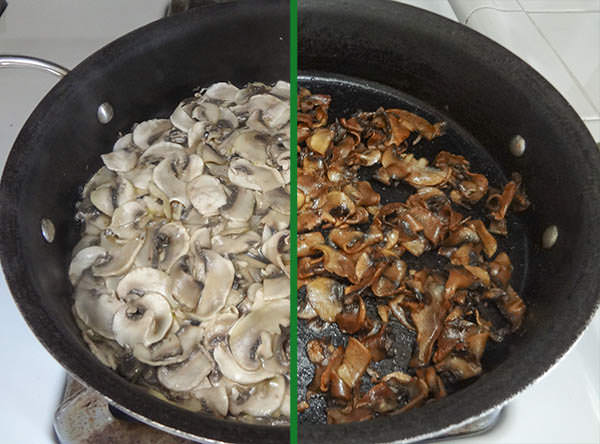 Heat a very large skillet over high heat and add a tablespoon of water and vegetable oil. I don't often cook with oils, but this recipe absolutely requires it. Toss all the mushrooms into the pan. At first, it will seem like an absurd amount of mushrooms, but they'll cook down in about 5 minutes (first picture above).

Allow the mushrooms to cook mostly undisturbed for about 15 minutes, stirring occasionally to keep them as single-file as possible. When they just start browning, add the two tablespoons of soy sauce, garlic powder, and cayenne and let cook for another 5 minutes until the liquid burns off. When they become dark brown and just on the border between juicy and crispy, they're done – remove from the heat.

Warm the corn tortillas and spread with mashed avocado. Top with the mushrooms and chopped cilantro. Squeeze lime over the top and enjoy!

Be sure to check out Andrew's website for more amazing plant-based recipes!

Find our why he calls himself the One Ingredient Chef here.