More than six in ten Australians – 63% – support a ban on new coal mines opening in Australia, according to the Lowy Institute's Climate Poll 2021.

A similar proportion would favour reducing Australian coal exports to other countries.

"Australian views of coal exports and coal mines … appear to have shifted significantly in recent years," the report says.

Only three in ten people would back the federal government providing subsidies for building new coal-fired power plants.

There are notable age differences in attitudes to coal. More than seven in ten (72%) of those aged 18–44 support banning new coal mines, but only 55% of people over 45.

The government's "gas-fired recovery" has majority support – 58% back increasing the use of gas for generating energy.

The poll found most people want Australia to have more ambitious climate policies ahead of the United Nations climate summit in Glasgow late this year.

Seven in ten people say Australia should join other countries, such as the United Kingdom and the United States, to increase its commitments to address climate change.

Scott Morrison has been edging towards embracing this as a target and is likely to do so before Glasgow, although he faces some resistance within the Coalition. All the states and territories have this target.

The federal government is coming under considerable pressure from the Biden administration and the Johnson government over the climate issue.

Climate questions will be a feature of the G7 summit in June to which Morrison has been invited.

The Lowy poll found 74% believe the benefits of taking further action on climate change would outweigh the costs.

More than half (55%) say the government's main priority for energy policy should be "reducing carbon emissions". This was an 8 point increase since 2019.

Six in ten people agree with the proposition "global warming is a serious and pressing problem. We should begin taking steps now, even if this involves costs". This was a 4 point increase from last year

The report, authored by Natasha Kassam and Hannah Leser, says: "While the COVID-19 pandemic appeared to temper concerns about climate change in 2020, the issue has risen to prominence again in 2021. The majority of Australians (60%) say 'global warming is a serious and pressing problem…we should begin taking steps now, even if this involves significant costs'. This represents a reversal of the dip in 2020 during the early days of the pandemic, but remains eight points below the high watermark of concern in 2006."

The climate poll was taken in mid and late April with a sample of 3,286. 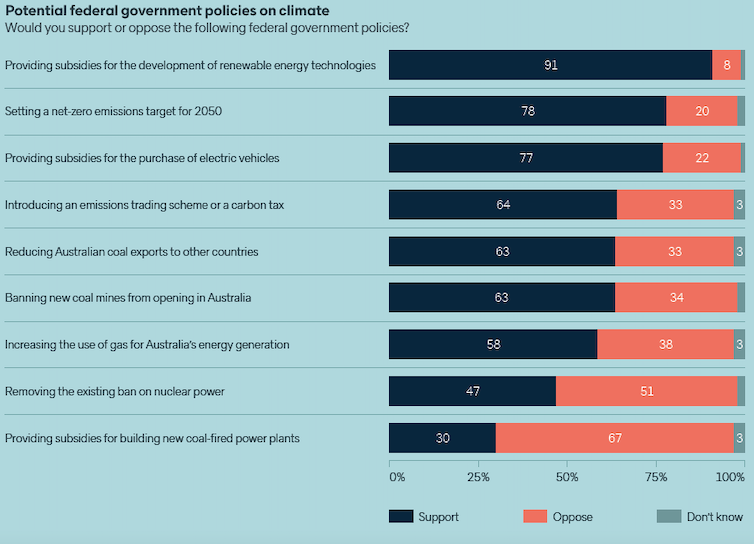