Leo's 'Before the Flood': What Is It Missing?

As a disaster risk scientist, I watched Leonardo DiCaprio's climate chnage documentary, Before the Flood with intrigue.

While it doesn't cover a lot of new material for those familiar with the topic, DiCaprio will undoubtedly reach a new audience given his star power and access to figures like Pope Francis and US President Barack Obama.

At the time of writing, the film has been watched more than 6 million times on YouTube.alone. Clearly, it will make a significant contribution to the contemporary discussion around climate change, much like Al Gore's An Inconvenient Truth a decade ago.

Coming in the same week that the Paris Agreement enters into force, the movie helps to set the stage for action to prevent the worst impacts of a global environmental crisis that is already well under way.

But as exciting as it is to see an A-list Hollywood star train his celebrity spotlight on this issue, it is important to critique some of the film's underlying assumptions. Chief among these are the idea that "green growth" will allow us to have economic growth without environmental damage, and the notion that the politicians and corporations who helped compromise our planet can now be trusted to save it.

He found overwhelming scientific evidence that disaster is imminent. He also found a lobby that is determined to deny that humans are responsible, and a near-universal commitment to technocratic solutions.

While talking to climatologist Michael Mann about the denial movement's well-funded and effective campaign to confuse the public, DiCaprio remarks: "If I was a scientist, I would be absolutely pissed every single day of my life." (Presumably he means "pissed" in the American sense, rather than the UK/Australian usage.)

He goes on to trace the corporate sector's funding of alternative and contrarian climate research, as well as the partisan politics at play in this movement.

One of the film's most poignant moments takes place in India. DiCaprio's discussion with environmentalist Sunita Narain turns to the issue of overconsumption in the United States, while poor countries are told they must embrace renewable energy. She insists:

"Your consumption is going to really put a hole in the planet. We need to put the issue of lifestyle and consumption at the centre of climate negotiations."

Narain is left shaking her head as DiCaprio argues ruefully that Americans will probably never accept a change to their "standard of living", a concept that is unavoidably linked to consumption.

Can green growth really save us?

A visit to the Tesla Gigafactory gives us a look at what is possible with today's technology. Chief executive Elon Musk shares his vision for a clean energy transition, claiming that 100 Gigafactories could power the planet. However, he warns that:

…the fossil fuel industry is the biggest industry in the world. They have more money and more influence than any other sector… [but] if government sets the rules to favour sustainable energy, we can get there really quickly.

While the film captures the jubilant atmosphere at last year's Paris climate negotiations, DiCaprio is clearly sceptical about the level of political will to challenge corporate power. The film argues that politicians generally follow public opinion, the implication being that they will only take on the fossil fuel sector if and when society demands it.

Yet sections of society have been demanding it for decades, and their outrage has routinely been dismissed. At this moment, protesters at Standing Rock, North Dakota are in a protracted standoff with police and private military over a planned oil pipeline that Native American tribes fear will harm local groundwater. President Obama's suggestion of allowing the situation to "play out for several more weeks" speaks powerfully of the political establishment's willingness to give armed backing to corporations.

Before the Flood lines up a series of leaders, scientists and innovators to tell us that we need to move faster towards sustainable energy. But their implied backing of the economic status quo of indefinite growth goes unchallenged, because DiCaprio sees such a challenge as impossibly radical. We therefore leave ourselves at the mercy of a technocratic response that has failed time and again.

A robust critique of "green growth", and of the growth paradigm in general, would have been well within this film's remit. Instead, it is presented as our only hope.

Likewise, the film neglects to challenge the implicit suggestion that the current crop of leaders and corporations are the best people to lead us into this green utopia. 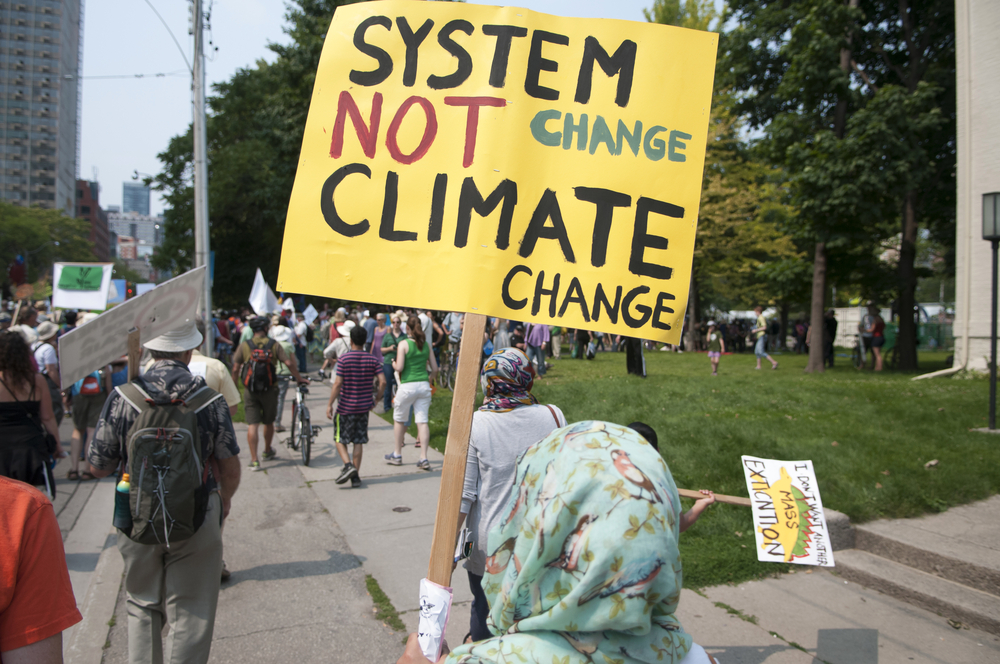 The film's message is that we simply need to educate, organise and take action in our communities, and then politicians will follow suit. This downplays the influence of money in politics, and the reality that voting in many countries is an exercise in futility. Rhetoric aside, can we really trust the same political elite that have allowed such destruction on their watch?

The film's intention to reach a mass-market audience might explain the editorial decision to sidestep the uncomfortable issue of economic growth. But this is to shirk a crucial responsibility. Less developed countries experiencing rapid growth are looking to the United States for leadership, but finding only hypocrisy.

DiCaprio tells a story that pins humanity's hopes on cheaper, high tech renewable technologies, alongside political will. In a speech to the UN General Assembly, he pleads:

No more talk, no more excuses, no more ten-year studies. This is the body that can do what is needed, all of you sitting in this very hall. The world is now watching. You will either be lauded by future generations or vilified by them.

I wonder whether we have mistaken our wishes for reality – that we can just will an energy revolution into being without making any hard choices. Why else do we defend a system where multinational corporations' right to profit comes before our health, livelihoods and environment?

Before the Flood offers us a choice between planetary destruction and the promised green tech revolution. But it doesn't tell us about the third option: radical system change. Its advocates are vocal, but repressed. I, for one, am convinced that the scientific community must now rally to their cause.

Read this next: My Top 10 Documentaries to Get You Thinking (And Questioning)

The Conversation Before the flood Leonardo DiCaprio