How Much Protein Do You Really Need?

Andrew Taylor has eaten only potatoes for a whole year.

Well, almost. He made his diet more nutritious by including sweet potatoes, and adding nut or soya milk to mashed potatoes. He also avoided vitamin B12 deficiency by taking supplements.

His cardiovascular health appears to have improved over the year, largely due to massive weight loss (50kg). He has cured his anxiety and depression, sleeps better and says he is fitter and healthier than he has ever been in his adult life. However, at the beginning of the year-long challenge, there was much debate among dietitians and nutritionists about whether he would get enough protein from his potato diet.

In the UK, healthy adults are advised to eat 0.75g of protein per kilogram of body weight each day. However, this "reference nutrient intake" is set at a high level to meet the needs of just about everyone in the population. Most people need less than this, and the average requirement is about 0.6g per kilogram of body weight (that is, 60g for Andrew's current weight of about 100kg). Andrew ate about 3.5 to 4kg of potatoes per day, and together with the soya and nut milks used to mash the potato, it looks as though he managed to meet his protein requirements.

Good for the planet

Although combating global warming may not have been the primary reason for his challenge, Andrew has done his bit for planetary health. Agriculture's greenhouse gas emissions are on the rise, with the largest source being methane produced by livestock. The agricultural sector is the world's second largest emitter (after the energy sector) and the biggest thing that we can do to reduce these agricultural emissions is to eat less meat.

Becoming vegetarian or vegan would not be an acceptable or achievable option for many people, but even aiming for a plant-based diet, and limiting meat consumption, would make a substantial difference. Scientific models have suggested that if average diets in the UK conformed to WHO healthy diet guidelines, it would reduce greenhouse emissions associated with food by 17%.

Further cuts in emissions could be made by adopting a "flexitarian" eating pattern with fewer animal products and more plant foods. This pattern is not unlike that suggested in the current Eatwell guide and the World Cancer Research Fund cancer prevention recommendations, and would have substantial health benefits as well as being good for the planet.

But one barrier to reducing meat consumption is the belief that we need it to meet protein requirements. A low-protein, high-carbohydrate, plant-based diet contrasts with the dietary regimen currently promoted by the food and fitness industries. The public are encouraged to believe that their own diets are in some way lacking in protein, and that they need to focus on their protein intake to make up for some sort of deficit.

This is perhaps reinforced by the way that untrained nutrition "experts" translate protein requirements into food guidance. For example, they might quite correctly say that a healthy young man needs about 55g of protein per day. They then translate this into protein-containing foods, such as 100g steaks and 100g grilled chicken breasts, which each contain 30g of protein. What this doesn't pick up on is the hidden protein in all the other foods eaten throughout the day.

For example, the following diet provides 2,500kcal of energy, enough for an average man. It also contains 136g of protein, more than twice the recommended amount. 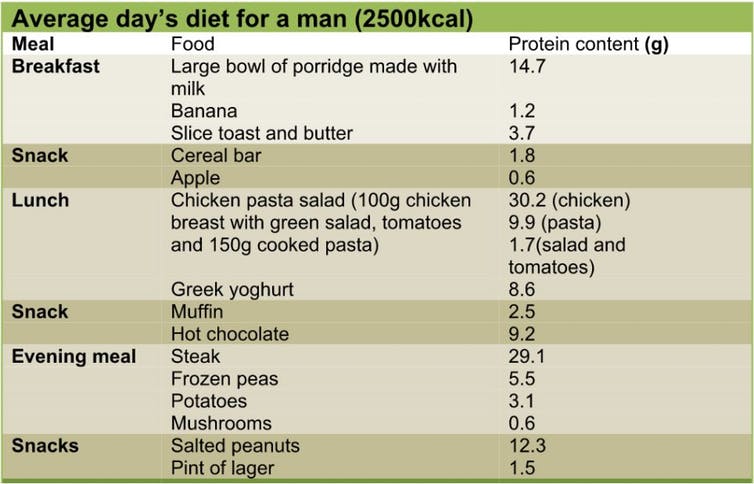 It is not hard to meet protein requirements. A few groups of people may need proportionately more; for example, children, older people, anyone recovering from major surgery, pregnant women and some athletes. But even these groups would rarely need more than 1.5 to 2g of protein per kilogram of bodyweight per day.

Even without the meat and chicken, this sample diet would provide adequate protein and, since the protein is coming from a variety of sources, it would contain a good mix of amino acids. National diet and nutrition surveys in the UK indicate that we eat more than enough protein.

If you're looking to cut down on your meat consumption, maybe you could become flexitarian or do meat-free Mondays. You will still manage to meet your protein needs. And if you have already made the move away from meat, there are other things you can do with your diet to reduce your environmental impact without taking the radical step of eating only potatoes.

This article originally appeared in The Conversation

We're pledging to eat #LessMeatMoreBeans to slow emissions from meat production. Are you with us?!