The Great Barrier Reef could be reconsidered for an "in-danger" listing by the United Nations World Heritage Committee in light of back to back bleaching events, leaving the Reef in what's been called a disastrous state.

In 2015, a 'State of Conservation' report was filed for the Great Barrier Reef. State of Conservation reports help the World Heritage Committee establish and develop conservation actions for the most threatened natural world heritage sites. If a particular site is at risk of losing the 'Outstanding Universal Value' that wins it a place on the World Heritage Listing, then the Committee may list it as "in-danger".

Australia narrowly avoided having the Reef placed on the "in-danger" list, and as a condition of this exclusion the World Heritage Committee required Australia to report back by the 1st of December 2016 explaining exactly how new 2050 water pollution targets were being met.

However, this expulsion from the listing was before coral bleaching decimated the Reef. Tim Badman, director of the IUCN's World Heritage Programme explained that "We would expect that that report from Australia is going to cover all the significant things that have happened since June 2015 and whether there are changes in the picture of the management or the response that is needed."

This means that the cataclysmic coral bleaching of the Reef, and how Australia is to rectify this needs to be an integral part of the report. IUCN will decide early 2017 if a brand new 'State of Conservation' report would be needed due to the severely bleached state of the Reef, and are yet to comment on if the bleaching would see the Reef listed as "in danger".

Read more: How will the Barrier Reef recover from the death of one-third of its northern corals? 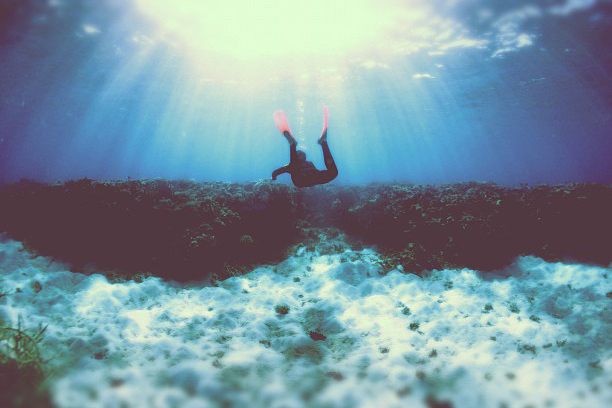 "Do we really care so little about the earth on which we live that we don't want to protect one of the world's greatest wonders from the consequences of our behaviour?"

WE DECLARE THAT THE REEF IS STILL "IN DANGER"

Scientists globally have stated there is not enough being done to protect the Reef. Secret modeling by the Queensland Government estimated that to meet water quality targets over the next decade we would need to invest up to $16 billion over the next decade. This falls far, far short of the promises currently standing from both major parties.

The Liberal Party has allocated $210 million to tackle the threats facing the Great Barrier Reef, and a further $1 billion over 10 years for clean energy projects. The government needs to commit at least $1 billion a year to improve water quality. While Labor intends to spend $500 million on fixing the health of the Reef, again this falls well short of the amount needed to ensure Australia doesn't lose its national treasure.

After the Reef was left off the "in danger" listing, lawyers from Environmental Justice Australia found that the Reef met five of the eight possible reasons a site could be listed as "in danger". This was prior to the coral bleaching earlier this year. In the final installment of his recent documentary series on the Great Barrier Reef, Sir David Attenborough states that the Reef is in "grave danger" and asks "Do we really care so little about the earth on which we live that we don't want to protect one of the world's greatest wonders from the consequences of our behaviour?"

People from all walks of life are calling out for protection of one of the globe's most loved ecosystems, yet are met with the deafening silence of inaction.

People from all walks of life are calling out for protection of one of the globe's most loved ecosystems, yet are met with the deafening silence of inaction.

CORAL OR COAL – WE CAN'T HAVE BOTH

A letter on behalf of 2500 coral reef scientists was sent to the Australian government at the conclusion of the 13th International Coral Reef Symposium in mid 2016. The scientists, policy makers and managers pleaded for greater protection of the Great Barrier Reef. Asking for a moratorium on new coal mines and an end to coal export, the scientists urged for a transition to clean energy. With this in mind, the thought that Australia is planning to build new coal mines is absolutely mind-boggling.

Since the World Heritage Committee analysed the threats to the Reef mid-2015, Australia approved the expansion of the Abbot Point coal port. The expansion would involve the dredging of the sea floor within the Reef, and the dumping of dredging on fragile coastal ecosystems adjacent to the world heritage site.

Our government is going to great lengths to ensure that the Adani Carmichael mine goes ahead. The mine would be the largest in the southern hemisphere. The Abbot Point coal port would be used to facilitate the export of coal from the Adani mine. These choices don't align with Australia's agreement to halt deterioration of the Great Barrier Reef.

The evidence is overwhelming. The Reef is in danger, and we are running out of time to save it. We cannot bury our heads in the sand and ignore the very real fact that one of the most wondrous places on this blue planet needs us to take serious and immediate action.

1 Million Women is calling on the World Heritage Committee to declare the Great Barrier Reef in danger. Add you name to our petition. Let your voice be heard.