Election 2016: Why has climate change disappeared from the Australian election radar?

Two weeks into a protracted election campaign, it is looking ever-more likely that climate change is to be placed way down the order of business – at least for the major parties.

The contest over climate change that characterised the previous three elections seems to have disappeared off the political radar despite the issue being more urgent than ever. Since the Paris climate summit, global average temperatures continue to break month-on-month records.

Just a few weeks after the summit, the North Pole was briefly not even able to reach freezing point – in the middle of winter. And just this month, Cape Grim surpassed a 400 ppm baseline minimum.

Then there is the truly frightening climate spiral developed by Ed Hawkins from the University of Reading. It shows what an El Niño amplified global temperature has climbed to. The spiral assumes a tight-knit but ever-expanding ball until April 2015, when the spiral line starts to separate dramatically from the ball. This year it careers dangerously close to the 1.5℃ threshold.

The diminishing political and media spiral on climate

While global temperatures may be spiralling out of control, the opposite appears to be happening with the climate issue attention cycle in Australia.

Apparently, climate is less important than jobs and growth – or, in Labor's case, health and schools.

A big part of this change in political climates is undoubtedly the Paris summit itself. The political triumphalism of the summit belies the scientific pessimism of so many climate scientists and activists.

Kevin Anderson from Manchester University's Tyndall Centre for Climate Change Research even declared the summit to be "worse that Copenhagen", in that it is based on out-of-date science, does not include aviation and shipping, and includes negative emissions in its scenarios for achieving abatement.

On the other hand, after the collapse of talks at Copenhagen, some activists see no choice but to climb aboard with the Paris agreement, insofar as it at least signifies a mainstream seachange in action – even if the actual measures are inadequate. The INDCs that came out of the conference still put the world on a path to 3.5℃.

Yet so many politicians from around the globe have sought to convince their constituents that the climate problem is all but solved. The Coalition is banking on such a sell to the Australian electorate as it gambles with a climate attention minimisation strategy. Much of this sell has been left to the "best minister in the world" Greg Hunt, both before and after the Paris summit.

Hunt has already claimed success on meeting the 2020 target, and with strategies to meet the 2030 target.

The Guardian's Lenore Taylor has pointed out that while the Coalition is bringing back the "carbon tax" scare campaign of 2013, its own scheme would have to draw on the "safeguard mechanism" component of Direct Action – which is itself a disguised ETS – to have any chance of meeting the targets.

Short of leaning on this mechanism, the only other option the Coalition has is to increase the taxpayer-funded emissions reduction fund to a level that would make a mockery of any claims to budget responsibility.

Add to this the fact that recent academic research on Direct Action has reaffirmed its status as a form of corporate welfare that is allocated to projects that would have happened anyway. And all this is in an Australia that has increased its already high emissions 3% since 2000.

Read more: Why direct action won't give us a bang for our buck 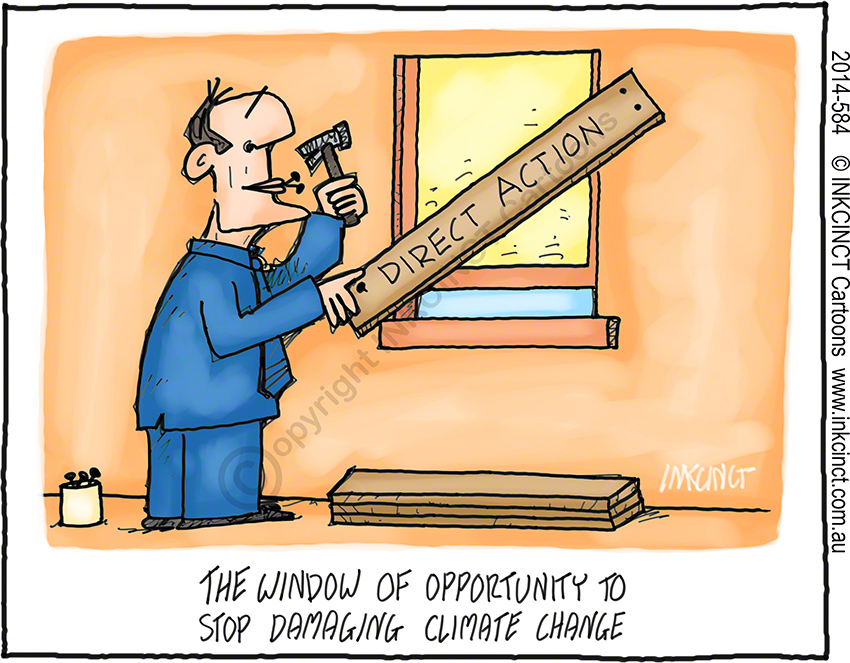 But have Hunt's strategies worked on the Australian electorate? Not according to a recent ReachTEL poll of 2,400 respondents on May 9, which revealed that 56% believed the government needed to do more to tackle global warming.

64% said they would be more likely to vote for a party that has a plan to source 100% of Australia's electricity from renewable sources like wind, solar and hydro in the next 20 years.

Prime Minister Malcolm Turnbull seems to have switched off his personal barometer on climate as an issue that is too politically fraught. In 2010, he said:

We know that the consequences of unchecked global warming would be catastrophic … We as a human species have a deep and abiding obligation to this planet and to the generations that will come after us.

But since then, Turnbull appears to have sacrificed his convictions to the climate-illiterate backbench of his party.

Labor has not done much better. While it has more ambitious 2030 abatement targets than the Coalition, it has been particularly silent in reminding voters of its climate policy alternative.

Labor and the Greens

Both major parties have opted to entrench their duopoly by not going after big targets on any of the issues that are usually recycled at election time.

Instead, much airtime has been spent in the opening weeks of the campaign attacking the Greens. Liberal ministers take every opportunity to pillory any alliance between the Greens and Labor. Last week, Finance Minister Mathias Cormann told Fairfax Media:

We see them very much on a unity ticket. In our judgement, Labor and the Greens are now on an anti-business, anti-jobs, and anti-growth unity ticket.

In the same week, Turnbull labelled Labor's proposal to double the intake of refugees as a "gesture to the Greens" on the back of Immigration Minister Peter Dutton's attack on the Greens' asylum-seeker policy.

The Greens are also distancing themselves from Labor because they want to capture the anti-politics vote. This is best achieved by showing yourself to be radically different from the major parties.

Labor, on the other hand, is almost forced into attacking the Greens because of the long-run stigma that News Corp papers have attached to any such alliance. During the first days of the election campaign, the Daily Telegraph and The Australian were jumping in with stories that no major party would ever form government with the Greens.

In contrast to the 2013 election campaign, the Tele even had a pro-Labor story "Save Our Albo" over the Greens' challenge to Anthony Albanese's inner-city seat of Grayndler.

But nothing much has changed. Back in the 2010 federal election, the The Australian declared the pride with which it had smashed any alliance between the Greens and Labor, and that the Greens:

… should be destroyed at the ballot box.

In October the same year Rupert Murdoch referred to the "bloody Greens" as a party that would ruin Australia's economic prosperity.

What is clear to the Coalition, Murdoch, and big business in Australia is that Labor and the Greens must be permanently isolated from each other in a sustained ideological crusade. Failing to achieve this would spell nothing short of game over for the Coalition.

The entire crusade, which is based on castigating the Greens as a loony left party that would bring down the Labor Party, requires so much journalistic theatre, compared to what could more easily be done with the Liberal-National Party marriage of convenience. One is a party of agrarian socialists, and the other a party serving mining capital and finance capital. But News Corp has been particularly disciplined at ignoring any of the tensions that these parties have had over the years.

Were Labor to form an alliance with the Greens it could take great leadership on climate. But there are a great many forces arraigned against them achieving a left-progressive coalition.

Whether the Labor Party has the courage to come out and challenge the Coalition to a contest over climate remains to be seen.

The Greens, for their part, are making many more inroads into this election than the last. They certainly have the strongest climate policy, with a renewable energy target of 90% by 2030. The ReachTEL poll referred to earlier shows the Greens have four times the primary vote than the National Party.

The Greens know that for under 30 voters they are already matching the primary vote of the major parties, and that a core platform of strong action against global warming is a big part of this support. Whether the major parties can ignore this support that springs from climate will be one of the biggest gambles of this election.

This article originally featured on The Conversation

Read this next: Why do women feel the impact of climate change more than men?