Broken Stuff Can Be Better Stuff: What I Learnt At A ‘Repair Fair’

My partner's Mum got back from a council clean up collection yesterday, and commented on the giant piles of electrical goods that were going to be taken "somewhere". She'd asked one of the people working on it whether it would all be recycled, and they had given her a less than confident 'yes' for an answer.

Maybe we're imagining that the worker wasn't certain because we visualise the giant piles of electronic goods in Asia - currently equating to the volume of eight ancient Egyptian pyramids - polluting the surrounding waterways with the precious metals that could have been used to make the next thing, toxins like arsenic, lead and mercury. We just have to hope that he was right.

I personally find it really hard to throw things out once they're broken. It's a habit I think I picked up from my Dad, who is convinced that he's able to fix anything, which is probably true, but I can't be sure because he usually doesn't get around to doing it. The object sits in some dark corner of the house, and it never gets fixed, it gets replaced. I for one feel better because we've held on to it and it's not in landfill, but the reality is, those things are going to get there eventually.

I talked about this with Melissa, who I met at the Australian Design Centre's 'Repair Fair'. She felt the same way, but she heard about the Repair Fair and realised it would be a way to fix one of those broken things - a plate she got from New York that had been crushed in the post. She'd been holding onto it for years.

Our Broken Stuff Can Be Even Better Than The Original

The Repair Fair advertised that people would have the chance to bring in their broken goods and a team of designers would work out how to turn it into a better version of its former self. I watched them turn a chipped ramekin and a tiered cake stand that had a chunk broken off into a set, so that the ramekin fitted in where the chunk was missing. The chunk itself, instead of being glued on, was designed to turn into a sugar spoon, with a bit of sanding. 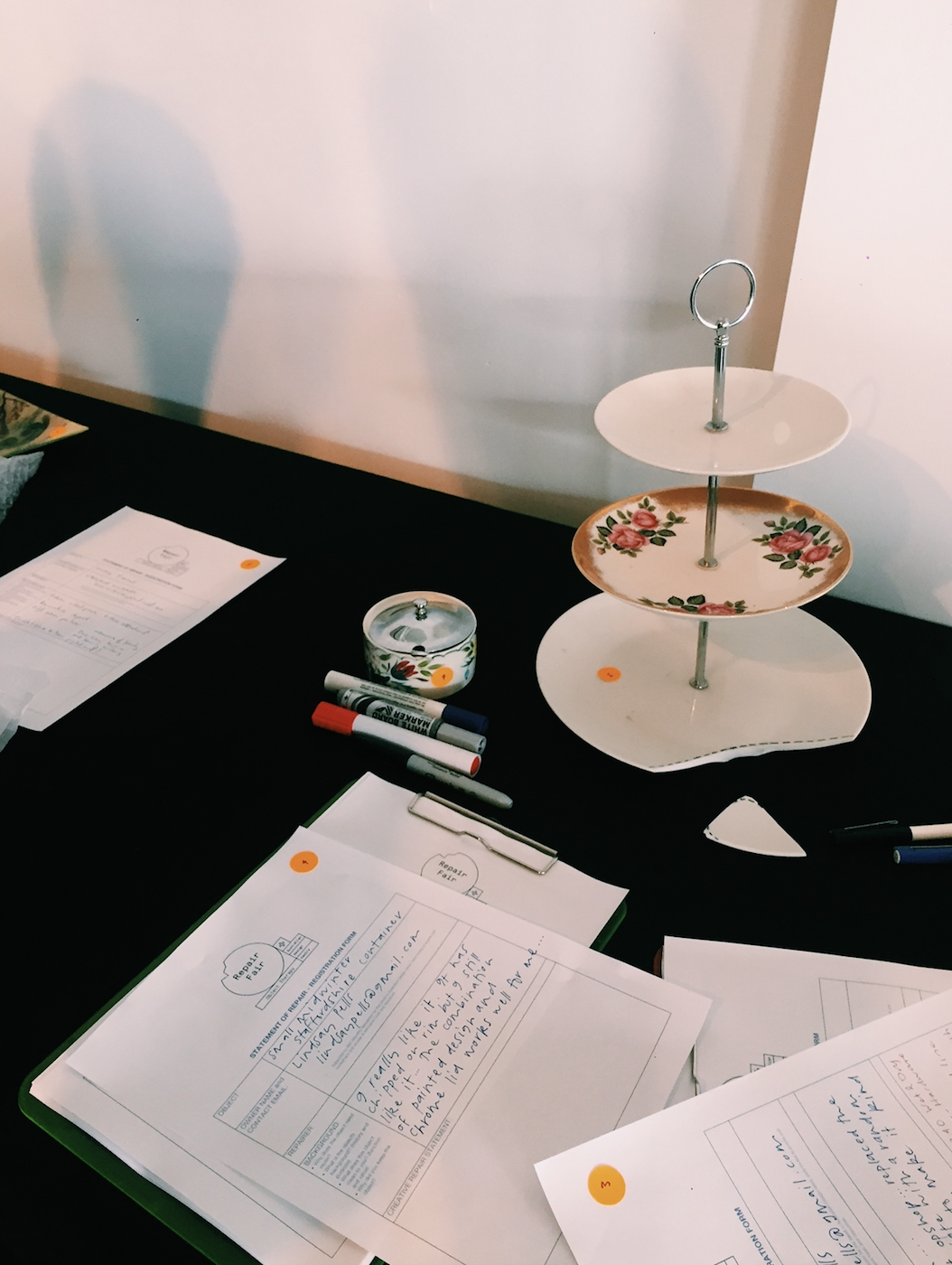 Along with the designers in action, there was a bit of 'here's one we prepared earlier' in the form of an exhibition. As an art lover and appreciator of all things different and beautiful, I found this part particularly inspiring.

Heard of Kintsugi? It's a Japanese concept where broken pottery is repaired by sticking pieces back together using gold to create a piece that highlights the imperfections but also makes it more beautiful. There was a bowl that had been repaired in this way, and a set of crockery that had been re-beautified by artist Halie Rubenis, which left the broken parts off, and adorned the 'broken' edges with bright lines and bubbles. Just like Melissa and her plate, this crockery also belonged to a woman who couldn't bring herself to throw it all away. 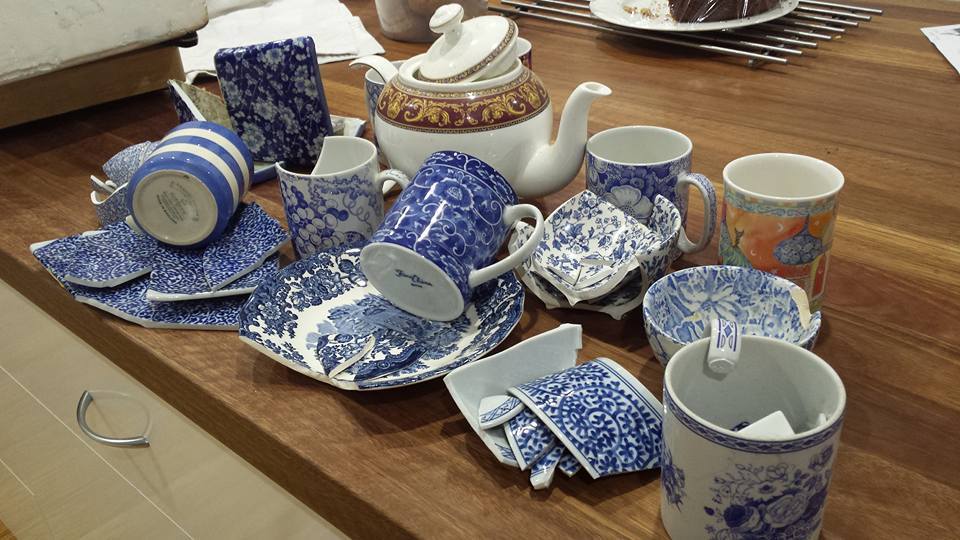 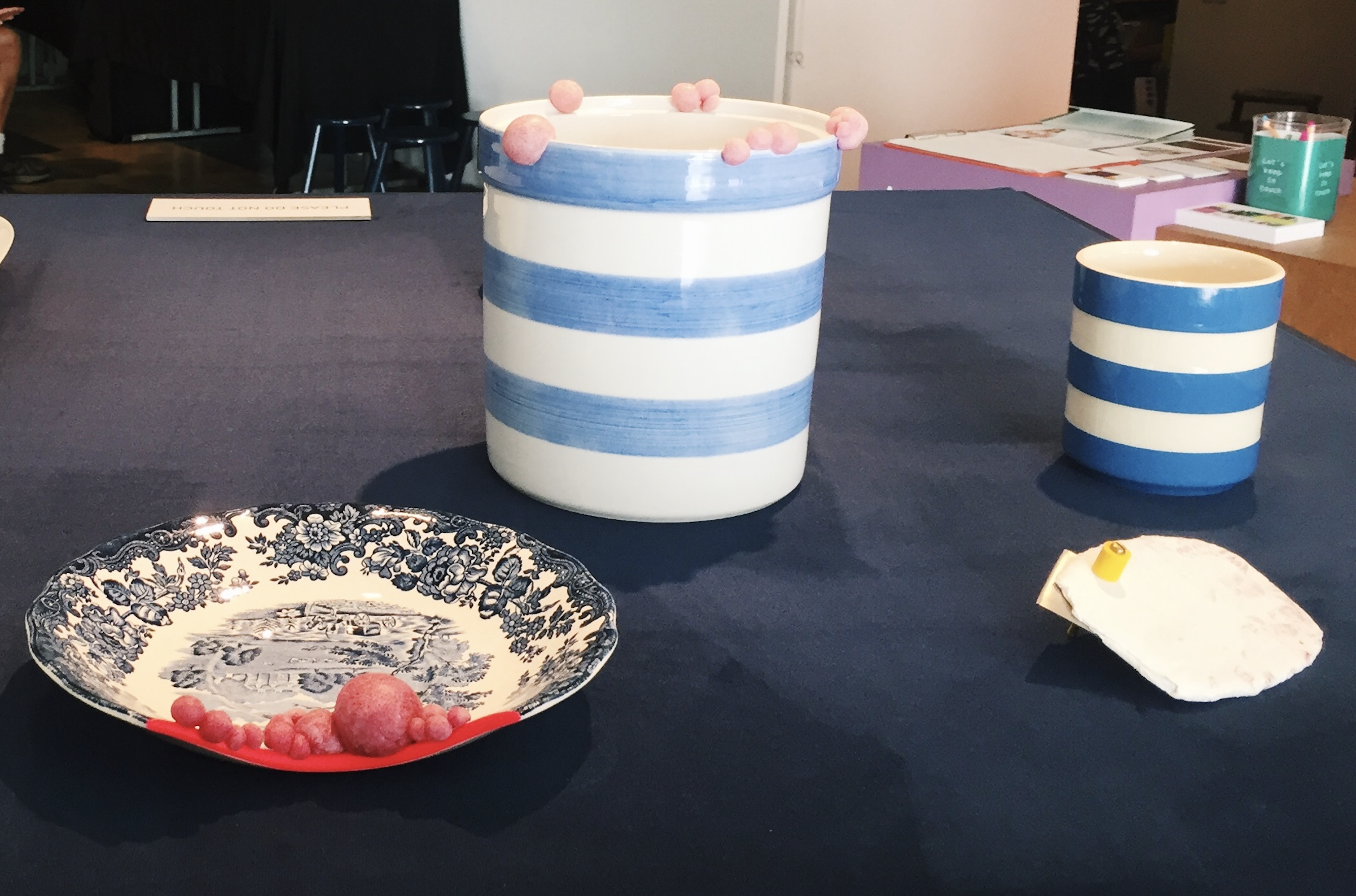 Repair And Rework Your Old Jewellery

The fair was full of makers who would welcome the things we don't value anymore because they're a little bit dirty, dull with age, or just downright broken.

Have you got an old jewellery that once belonged to a special family member that you wouldn't ever wear because it's snapped or lost its lustre? Meet Erin Timony from Gaffa Gallery. She showed me a ring she had just finished working on for a customer, that had belonged to their mother. It glimmered up at me out of its box, as she told me how it had been given to her with a broken band and dull stone. Erin had removed the stone and polished it up, melting down the gold that was left and mixing it with some more gold to make the ring I saw in front of me. "It's a way to get a new piece of jewellery while holding onto the sentimentality that came with the original piece. You save some money and it's better for the environment," she explained. 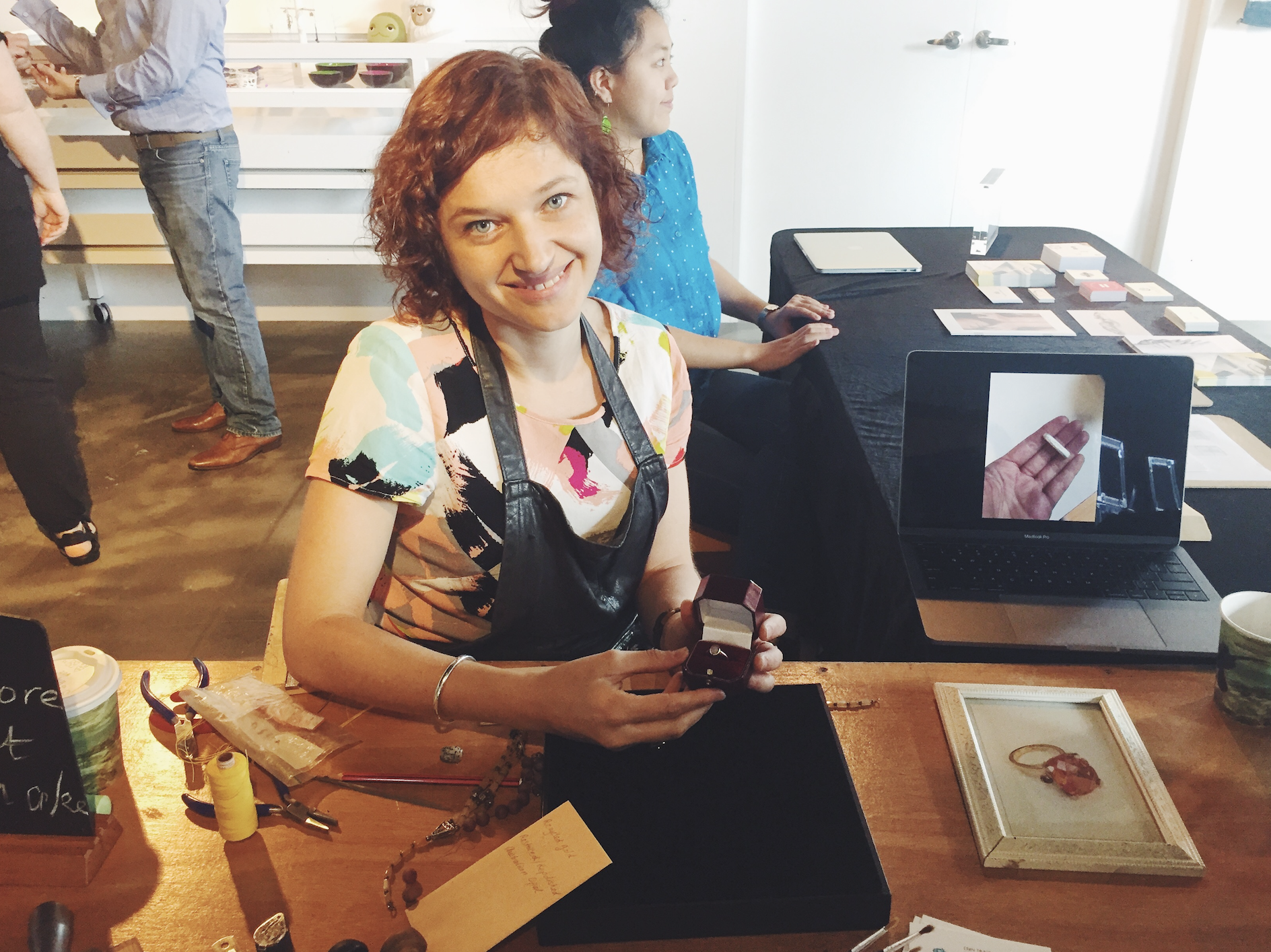 I learnt that repairing one's own jewellery is also an option- Gaffa Gallery run jewellery making classes (not the first class I've heard of in Sydney either, so I assume there must be lots of options in most cities), and said that if I came in and mastered all the basic skills, I could then bring in old pieces to rework myself.

Make Furniture (And Everything Else) New Again

I also met Luke, from Sydney's repair cafe, The Bower. He gave me a demo of a piece of skirting board he was restoring that he was thinking he might turn into a bed head. One side looked shiny and new, while the other was dusty, and covered in cloudy white moisture stains. All he'd done to the shiny side was cover it with a bit of linseed oil and rubbed it with steel wool, sucking the moisture out of it to make it look as good as new. That was it! I thought about the three lifeless looking pieces of furniture I had sitting at home that I could make shiny and new again. Imagine if that's what we all did, instead of resorting to buying something new and throwing out a "beautiful piece of hardwood" as Luke described some of it. 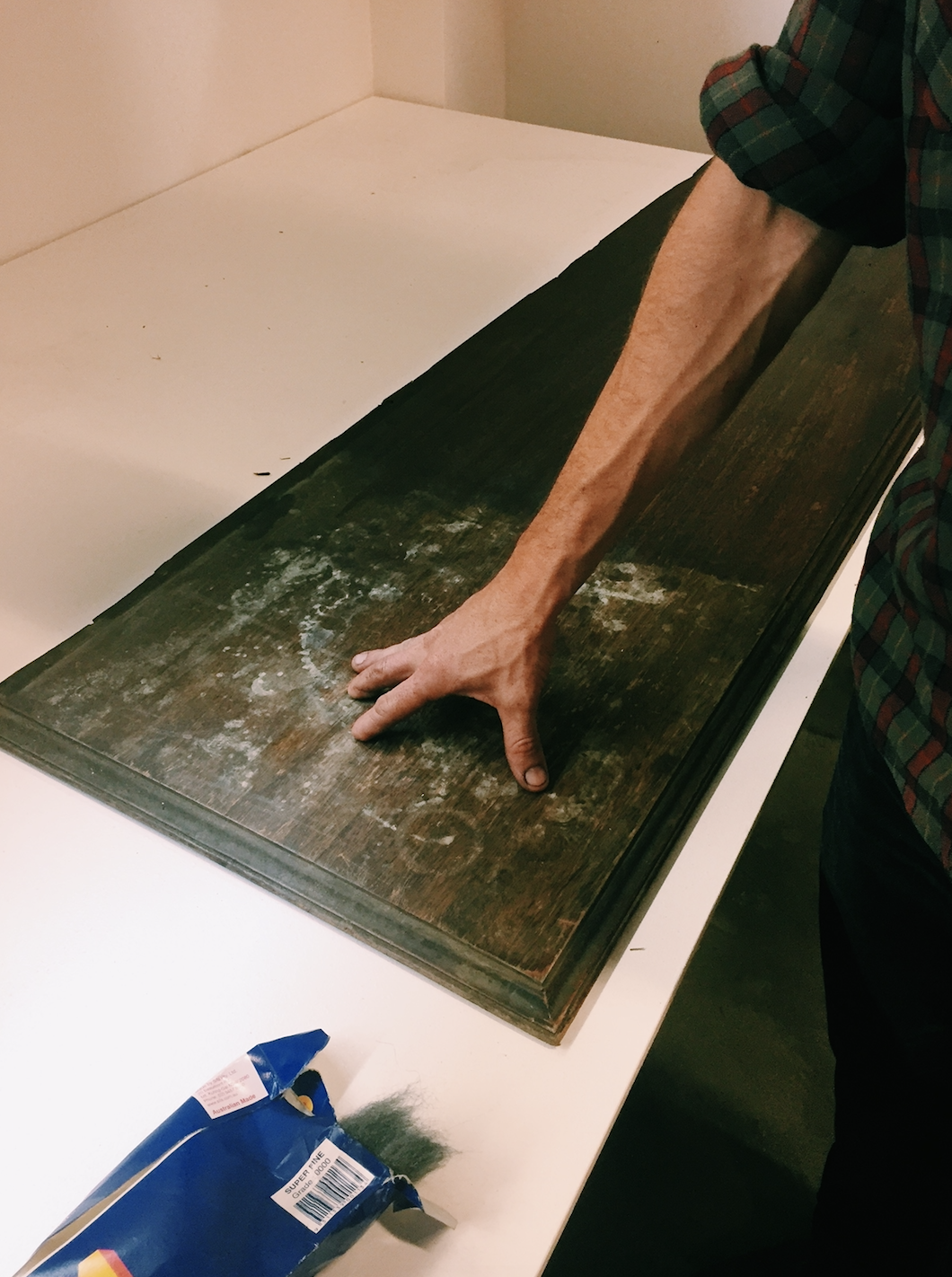 Other pieces of furniture that were on display from the Bower told a similar story. They had been donated by people who no longer wanted them because they looked a little dishevelled, but all they'd needed was a bit of a clean and some rust sanded off. One such bedside table was for sale for over $200, your typical trash to treasure case.

Donating your broken stuff isn't the point though. If you're in Sydney, you can either drop your stuff off at the Bower and they'll have a go at fixing it for you, or you can pay a bit less and they'll show you what to do and skill you up for next time. They can take on any furniture, bikes or electronics that need their help, and if your object in need of repair doesn't fit under any of those categories they'll still give it a go. What a great deal! Instead of buying something new and getting yourself that temporary burst of happiness, we should all just go and get our creative, problem solving juices flowing, and learn a new skill. We have a broken microwave at home at the moment, and by this point I'm envisaging myself becoming incredibly popular with my neighbours, street-famous for being able to fix microwaves.

I have to capture and save that thought for next time something breaks, because I'll admit, as soon as I see something's looking a little worse for wear, I often start picturing it's sparkly new (and probably costly) replacement. Being at the Repair Fair made me realise that what I really need to be doing is imagining how my broken old things can be made better. Not only does that benefit the planet, but it's probably going to benefit me too, because I'll have the chance to be creative and get satisfaction out of producing something myself, without stressing about how I'll afford the new thing. Wins all round.

Read this next: Craft Like A Zero Waster, Whatever Your Age