We Have A Target, We Have A Plan, But We Need Your Help To Turn This Plan Into Law

Let‘s Take Politics Out of the Climate Bill and think of it as a sensible plan for a liveable future.

We have a target, we have a plan but we need your help to turn this plan into law!

Independent MP Zali Steggall is tabling her plan, the Climate Change Bill, in Parliament on November 9 . The purpose of the Bill is to lock into law a plan for Australia to reach Net Zero emissions no later than 2050. We need your support to make it happen, sign the petition support to the Bill here.

In a recent interview (see below) 1 Million Women Founder Natalie Isaacs spoke with Zali about putting politics aside and how her Climate Bill will reach this target. "We have all had enough of the weaponised debate around Climate and we all want to get on with a sensible solution. We all know you set a goal and then you set how you get there. The Act delivers 5 year emission reduction plans, so we can gradually get there." Zali said.

I don't know about you, but I really like the word "sensible". I like to think of the Climate Change Bill as a "Roadmap" out of this mess: global heating; the bushfires; through post-covid economy. This isn't about politics, this is about having a plan for the future. A plan that will guide us out of Covid into a future of jobs, clean air, a happy planet, better health, and a bright future for our children and grandchildren. In Zali's words: "The impacts of Climate Change represent the greatest threat to our national security, our economy, our health and our environment. But if we implement an effective plan now, we can create a safe and prosperous future for ourselves and our children."

Originally to be presented to parliament in March, the Bill was postponed due to the Covid-19 lockdown. The delay has allowed the Bill to be updated, following more consultation with business groups, environmental organisations, legal experts and Federal MPs. The legislation now incorporates the Government's Technology Investment Roadmap, released in May (which will assist in identifying and developing low emissions technologies).

Australia is lagging behind the rest of the world

With many countries adopting the Net Zero target by 2050, Australia risks being left behind by countries with similar economies like the United Kingdom, New Zealand, Canada and also the European Union.

Zali's Climate Bill is based on the 2008 UK Climate Change Act - yes, I know, we are 12 years behind! It's good to know that this plan is a road already travelled - the experience from the past 10 years of the UK Act provides lessons for climate law-making. It also shows us what is achievable when a plan is law, for example 400,000 jobs in renewable industries have been created in the UK!

What you need to do NOW:

2. Write to your MP - telling them, you (their constituent) urge them to support the Climate Change Bill. If a conscience vote system is adapted, then MPs will be allowed to vote with their conscience (rather than follow their party's stance) and that would make it even more important to let them know that you want them to back it.

3. Rally family and friends, of all political persuasions and all around Australia, to sign the petition and write to their MPs.

If this Bill gets up we will be off and running with a roadmap for a safe, secure and prosperous future. If you have time and would like to read more background on the Climate Act go here or read the act in full here.

Allison Licence is a Sydney-based freelance writer and 1 Million Women volunteer who is passionate about the environment and finding ways to live more sustainably.

Photo by Mika Baumeister on Unsplash 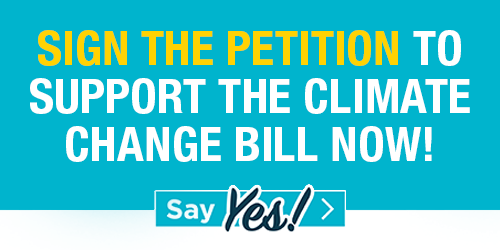