5 Ideas, (Instead Of More Stuff,) That Belong In The Trash

We're all about downsizing and minimalism, so we've decided to apply the concept to our ideologies, too

Thank you to Karen from the blog Farminista's Feast for inspiring this post. A huge amount of fruit and vegetables goes to waste simply because it fails to meet the strict cosmetic standards of grocery stores. On a post I wrote recently about ugly apples my daughter bought to make pies, Karen commented "As a culture, we have to dispose of the myth of visual 'perfection' be it fruit or otherwise. Let's toss that myth in the landfill instead of all the food!!!"

Wonky fruit and veg are making a comeback - here's why

My daughter says I sound like a crazy conspiracy theorist when I write about Big Food, Big Soda, Big Ag, Big Pharma… I think an image of "The Madwoman in the Cabin" comes to her mind—alone, dreadlocked, living in the woods with no access to running water, cuddling up to a rifle at night. (How I wish I had a pic of this.) I'm not quite there. And wouldn't Big Whatever prefer that image over one of a (mostly) normal female head of household who controls the purse strings on every single food purchase? There are so many of us after all. Imagine if we all went small. How terrifying for corporate America.

When we shop small, more of our money stays in our community to support schools, roads, the fire department…you know, the backbone of our neighborhoods. I shop at the farmer's market and I try to shop small and local for staples like milk, flour, butter and so on, although I do live close to Whole Foods and buy quite a bit in the bulk section there. I do my best (see #1). 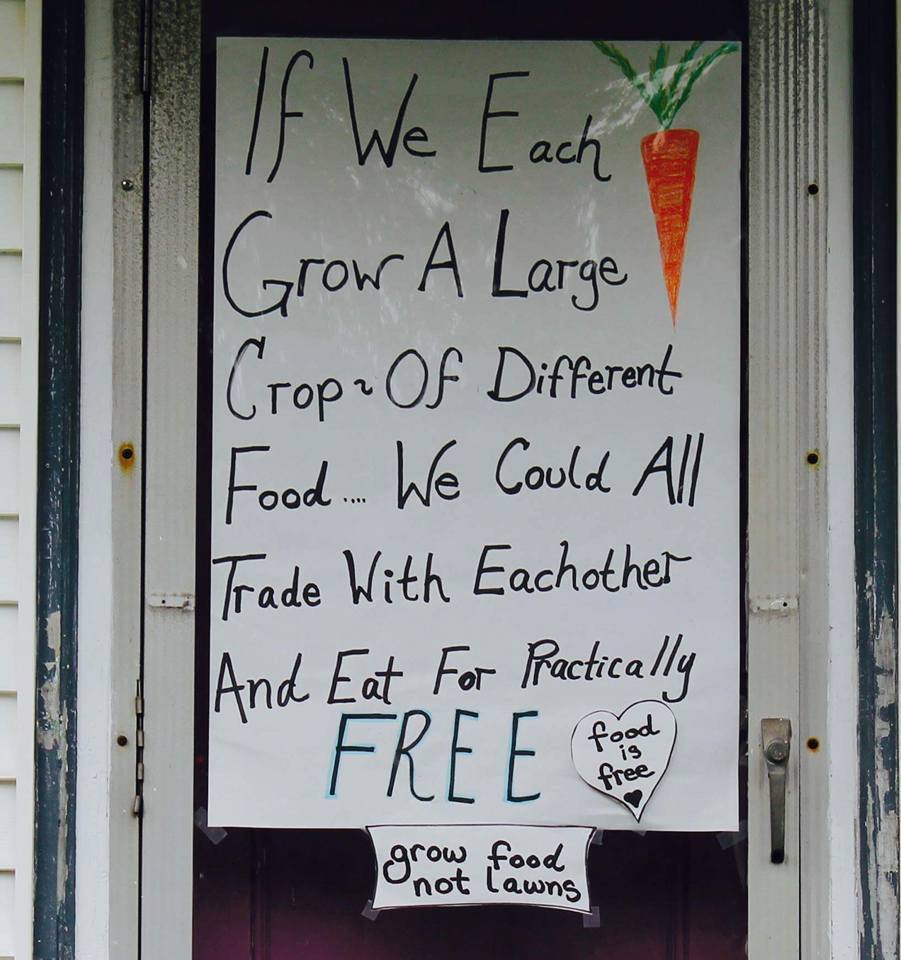 I love the sign in the pic above. I found it on the Grow Food not Lawns Facebook page. If you follow me on social media, you may also know that I have a crush on Ron Finley, the gangster gardener who plants gardens in the food desert of South Central LA. Similarly, Pastor Richard Joyner also grows healthy food in his community to feed the poor and improve their health. NFL player Jason Brown traded a $37 million career for a farm on which he sustainably grows real food that he donates to struggling individuals in his community. The list of food heroes keeps growing. Oh and how could I forget Guerrilla Grafters? This stealth group in San Francisco grafts fruit-bearing branches onto ornamental trees throughout the city, with the aim of turning the streets into an urban food forest. I love their motto: "Undoing civilization one branch at a time."

This practice of sharing food just keeps gaining steam. It represents the real sharing economy—unlike Uber. I find this trend very exiting and it gives me hope. Let's share our bounty! Every man for himself isn't working.

One of the many things I love about fermentation is its inconsistency. (And this comes from a recovering perfectionist.) I find this inconsistency charming.

Sure when I baked bread with commercial yeast I knew what I would get and had basically no learning curve. Proof yeast + add flour + knead + proof loaves + bake = yummy bread. But I find that baking this way doesn't engage me with the natural world in the same way that baking with a sourdough starter (aka wild yeast) does. I do follow a recipe for sourdough bread but I also observe, paying attention to the feel, taste and smell of the dough—listening to what is has to tell me. And it teaches me something every time I bake.

Homogeneity comes from control. We can't control nature and I can't control the microbes fermenting my sourdough. I can only guide them. I may get a great crumb, the bread may taste more sweet or it may taste more sour. Occasionally I have a PBF (partial bread failure). It's all an adventure.

We demand what we want when we want it. And here in the U.S. (if we have the cash) we can get what we want when we want it: strawberries in the dead of winter,flowers flown in from Columbia or Ecuadorand sugar for breakfast, lunch and dinner. Well the strawberries have no flavor, those flowers make a huge carbon footprint (the chemical fertilizers, the pesticides, the energy-guzzling refrigerators and the flights) andsugar is toxic(I'm trying to eat less of it…it tastes so good…).Marshmallows contain a lot of sugar…but with them, psychologist Walter Mischel found that kids who can delay gratification do better in life. In the 1960s at Stanford, he conducted a now-famous studyin which researchers presented kids with a treat, such as a marshmallow or cookie.

The researchers explained that they would leave the room for a few minutes. During that time, if the kids did not eat the marshmallow (or other treat), they would get two upon the return of the researcher. The study followed these kids for many years. The kids who had delayed gratification went on to "perform better academically, earn more money, and be healthier and happier…[and] avoid a number of negative outcomes, including jail time, obesity, and drug use."I think refusing those strawberries in winter and waiting until June for the real thing may have a similar effect on our happiness. Anticipation for those sweet, local, in-season berries will satisfy us all the more.

Anne Marie Bonneau writes the blog ZeroWasteChef.. She runs her kitchen following three simple rules: no packaging; nothing processed; no waste. Anne Marie lives in Northern California, where she teaches fermentation workshops, speaks on zero-waste and plastic-free living and hosts webinars on these topics.

Read this next: In The Age Of Climate Change, I've Decided Not To Have Kids. Here's Why.