4 Women Fighting For Our Planet We Should All Be Following

This International Women's Day we're celebrating the collective power of women - change makers who don't back down and continue to fight for a better world no matter what. We wish we could write an article and include all the amazing women who we admire and cheer for, but that article would go on forever. So we've put together a shorter list of four women from around the world who are at the forefront of climate movements, land rights fights and pollution solutions. Let's follow these women and support their important work!

Hindou Oumarou Ibrahim is a strong advocate for Indigenous people around the world, working to include their voices and knowledge in efforts to solve the climate crisis. Indigenous communities are on the forefront of climate damage, despite being the people who have contributed least to the climate crisis. Hindou Oumarou Ibrahim is a true leader, advocating for the inclusion of Indigenous knowledge on the world stage. Through her work, she also sheds light on unique Indigenous solutions and traditional knowledge of the land, which is so essential to reverse climate damage.

View this post on Instagram
Meeting of the @UNPFII members is going on a great progress in Sàmi land and parlement SAJOS. So nice meeting all the members of the forum and having visit of the minister of foreign affairs of Finland 🇫🇮 that kindly flighted from Helsinki to Inari specially to visit us and discuss with us. If all governments can put indigenous peoples issues as priority on them political agenda that can make the world a better place 🤩🥰🌷
A post shared by Hindou Oumarou Ibrahim (@hindououmar) on Feb 11, 2020 at 1:57am PST

Community resistance to fracking is strong in the NT - communities have been fighting back for years - when will @originenergy listen? #dontfracktheNT pic.twitter.com/IPnFPmOxlZ
— Amelia Telford (@AmeliaTelford) December 3, 2019

Miranda Wang has found a way to recycle non recyclable plastics! She is the founder and CEO of BioCellection, a chemical technology company pioneering plastic recycling and helping to solve our plastic pollution crisis. At 18, Miranda Wang and Jeanny Yao discovered a bacterium that could eat away at plastics and now works to recycle previously non-recyclable plastics. The goal is to transform those plastics into new materials that can go into anything from cars to mattresses! Wang also focuses on educating people on waste management to help build a future where we aren't wasting valuable resources.

Daisy Jeffrey is at the head of the movement for climate justice in Australia. She is a key organiser for the school climate strikes which have united large parts of Australia in a call for climate action, drawing hundreds of thousands to protests! She fights to empower young people and shift them away from apathy and towards being ready to take action - from uniting different high schools to uniting cities and towns all over the country. Daisy has a book 'On Hope' coming out soon too, where she writes about how ordinary people are fighting back and demanding climate action.

View this post on Instagram
#ThisIsClimateChange 🌎✊ • On NOVEMBER 29th, drop your pens and join us @ LIBERAL HQ at 10am 🌎 • Our country is on fire. @scottmorrisonmp knew this would happen and still did nothing. We cannot let our government get way with this.
A post shared by Daisy Jeffrey (@daisy.jeffrey) on Nov 18, 2019 at 2:12am PST

This snapshot alone shows us how important it is to include a wide array of voices in the climate movement. Ruth Bader Ginsburg said, "Women belong in all places where decisions are being made. … It shouldn't be that women are the exception." and we couldn't agree more!

Read this next: Calling All Water Babes - You Love The Ocean So Let's Get Active To Protect It! 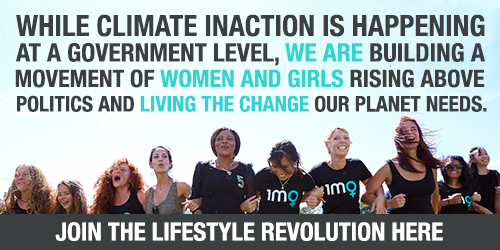