Thinking of renovating? Read on before you make any plans

Sustainability has become an important buzzword, both in the media and in the public arena, and for good reason. With the rapid depletion of our planet's limited resources, and rising levels of pollution, it is vitally important to incorporate a sustainable mindset and approach to all areas of life. The construction industry is no exception, as it is responsible for more water pollution than any other industry. It accounts for approximately four percent of air pollution, not to mention extreme levels of noise pollution and a negative impact on soil and water.

To reduce the adverse effects of the building industry on the environment, it is important to have a functional understanding of how building materials are sourced and produced. This greatly impacts their level of sustainability in relation to people, the planet and to profit, and ultimately determines their overall carbon footprint.

Limestone has been a staple of the building industry for as long as man has been building durable buildings, as far back in history as 14000 BC. It is sourced by mining and can be used as a building material in its own right but also plays a major role in the production of a variety of other products vital to the building industry.

The most apparent examples of this are concrete and plaster, but limestone is also vital in the production of glass and steel. Limestone is a sedimentary rock that is abundant in almost all areas of the planet, and is most commonly extracted in large open pit quarries. A majority of quarried limestone is crushed on sire and converted to lime by burning it. By prolonged exposure to heat, the lime is converted to quicklime, or calcium oxide, which releases vast amounts of carbon dioxide into the atmosphere. This process of burning results in sulfide emissions which are a major trigger for acid rain. Limestone quarries not only disfigure the environment, but also create a large amount of noise, heavy traffic and significant levels of both air and water pollution. 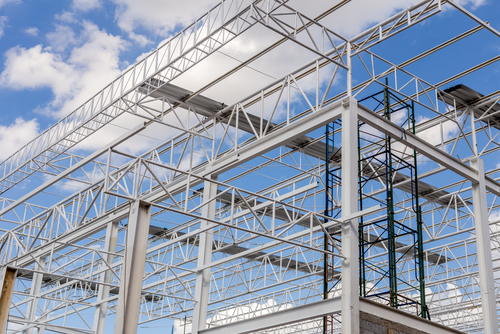 Building tall and durable buildings is almost unimaginable without steel. Steel production starts by mining iron core, limestone, magnesium as well as other trace elements. This cocktail of various materials means that steel is much more durable and structurally solid than iron. The iron must first be refined from raw iron ore. The ore is mixed with coal and limestone and put in a blast furnace at high temperatures. The result of this phase is pig iron, and the impurities (known as slag) float to the surface of the molten steel. The process of steel manufacturing releases up to 30 kg of air pollution per ton of steel, as well as large amounts of water and soil pollution. That being said, steel also has a great potential for sustainability, as it is 100% recyclable and can easily be repurposed or re-melted. In addition, steel elements last a lifetime, and this longevity conserves valuable resources and energy consumption.

Aluminium starts out as bauxite ore, and is notorious for requiring vast amounts of raw material in order to get just a small amount of finished product. To be exact, the ratio of ore to aluminium is a shocking six to one. Tropical rainforests are rich in bauxite, and bauxite mining is a major contributor to deforestation and the depletion of the world's largest rainforests. Strip mining involves the complete removal of vegetation and topsoil from large areas of land. This soil is replaced after mining is complete, but the land is rarely allowed to become forest once more. It is usually handed over to the farming industry. A large amount of electricity is needed for aluminium production, meaning burning of fossil fuels and in turn pollution. Caustic soda is added to the refined bauxite, and this mixture is heated to create a white powder called aluminium oxide. This powder then goes through an electrolytic reaction at a temperature of 1600 degrees Celsius (3000 F). A direct electric current is used to smelt the material into aluminium and separate the oxides. Apart from aluminium, this process also creates large quantities of waste material, known in the industry as "mud". The mud contains traces of hazardous substances and heavy metals. Another byproduct of aluminium smelting is potliner, that contains so much chlorine and fluoride that it must be disposed of as hazardous waste. For every pound of aluminium, approximately 0.02 pounds of potliner are produces. Fortunately, aluminium is recycled relatively easily and energy efficiently. Recycling aluminium takes only 20% of the energy needed to refine bauxite, not to mention that there is far less harmful waste products. 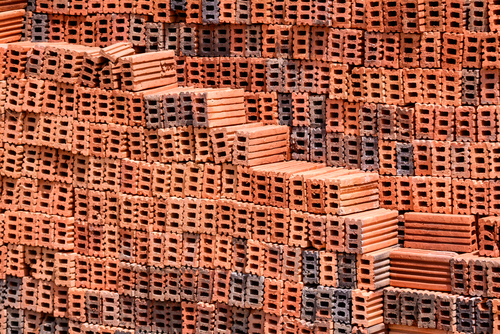 Bricks and tile start out as clay and adobe soil that are usually present in shallow surface deposits. Manufacturing of tile and brick is often done near the mining area to reduce transportation and extraction costs. To get the finished product, bricks (with the exception of adobe) and tiles must be fired at high temperatures. Glazed tiles and bricks require twofold firing; the first firing ensures a permanent shape and the second one produces the glazed finish. This process of firing can take from a few hours to many days, and is extremely energy inefficient. The process of brick production has not changed for many centuries in many countries of the developing world. This means that it is very inefficient and energy intensive, spewing black carbon into the atmosphere and polluting air, water and soil. As bricks have a large amount of embodied energy, they are notoriously long lasting. With a lifespan of upwards of 350 years, using recycled or repurposed brick is a viable option, both environmentally and economically.

Wood is by far the most common material used in the building industry. Lumber is used in most all residential buildings for framing, as well as in many commercial structures. Wood can be used to produce many other products such as particleboard, plywood and paper; which are all irreplaceable in the building industry. The most obvious adverse effect of sourcing wood is deforestation. Clear-cutting is the wasteful method of harvesting wood that consists of removing all of the vegetation within a certain area. This method was the prevalent one in the lumber industry until recent years. Nowadays, companies are required by law to replant the area where clear-cutting takes place. Unfortunately, this does not solve the deforestation problem, nor does it replace the natural biodiversity and ecosystems that were present before the trees were cut down. The trees that are usually monoculture ones, and this same-species planting leaves them vulnerable to diseases and pests. In order to save the environment, or more likely their public image, many lumber companies now enforce "selective cutting"; cutting down only trees that are large enough to remove while leaving other vegetation untouched. 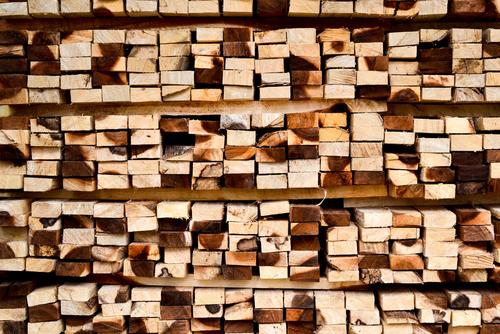 READ THIS NEXT: Meet the woman turning scrap rubber into useable "green Steele"